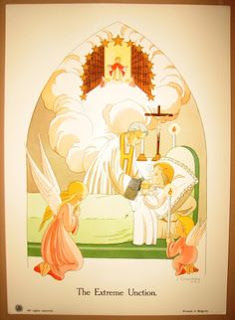 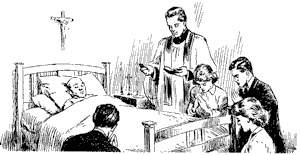 I found this in our "Diocesan Yearbook" from 1919! This turns upside down the ideology of spirit of Vatican IIers that the post-Vatican II renaming of the Sacrament of Extreme Unction to the Anointing of the Sick was to correct what the pre-Vatican II Church taught about it. Here it is:

A strange and dangerous error prevails with regard to this Sacrament. It was instituted by Christ to give grace to die well and it should not be postponed until the very hour of death. One of its results is, under God's Holy Will, to effect a cure. It is strange, however, that some people, when learning that a sick person has been anointed, expect to hear immediately afterwards that the patient is, of course, dead. The Church teaches us: "It is a grievous sin to defer it until, all hope of recovery now lost, life begins to ebb, and the sick person is fast verging into a state of insensibility. It is obvious that if administered when the mental faculties are yet unimpaired; wile reason still exercises its dominion and the mind is capable of eliciting acts of faith, and of diverting the will to sentiments of piety, the Sacrament must contribute to a more abundant participation of the graces which it imparts." (Catechism of the council of Trent.) Children who have attained the use of reason should receive this Sacrament when ill.

On the same page we find this little ditty, so clear and concise:

Some Things that all Catholics should know:

--That there is but one God and three Divine Persons in God.
--That God will reward the good and punish the wicked.
--That God became man for love of us, and died upon the Cross that He might redeem us from Sin and Hell.
--That God instituted seven Sacraments, through which the merits of the Redemption are applied to individual souls, and to the worthy reception of which is attached special grace and strength to enable us to overcome the temptations of life and save our immortal souls.
--That these Sacraments are as follows: Baptism, Confirmation, Holy Eucharist, Penance, Extreme Unction, Holy Orders and Matrimony.
--That God wills the salvation of all mankind, and if any be lost it is in spirte of all that God can do to save them.
--That frequent Confession and Communion are an infallible means of overcoming the weakness of human nature and advancing in virtue.
--That if one is able to contribute towards the support of the Church and does not, he is guilty of sin in such neglect and should accuse himself of it in Confession.
--That God has made us to know, love and serve Him here upon earth, that we may be happy with Him for all eternity.
--That it will profit a man nothing to gain the whole world if in the end  he lose his soul. that time is given us to prepare for eternity.
--That nothing save God can satisfy the cravings of an immortal soul.
--That if God has blessed us with the gift of true Faith, He has a right to expect that we show our appreciation of His favor by the good example we set our neighbor, through the purity and sanctity of our lives.

Things all Catholics Should Know about Holy Days, etc.

On which every Catholic who has come to the age of reason is obliged to hear Mass and rest from servile work, unless hindered by sickness or other sufficient cause:

A blessed Christmas to all!
Posted by Fr. Allan J. McDonald at Thursday, December 24, 2015

Most people who identify as Catholic do not attend Mass, they would never even consider going to confession. The majority of Catholics today do not know what the Church teaches nor do they care. The majority of them are pro abortion, pro gay "marriage", pro "women priests". They believe all religions are the same. Why would you think that these people would ever care about receiving the Annointing of the Sick? People cannot love what they don't know.

Go to a typical Catholic parish and what do you find? You find irreverence, crude behavior, banal music, sloppy liturgy, ridiculously bad preaching. You find priests who do not know the names of their parishioners. You find parishioners who would think nothing of running you to the side of the parking lot to get out after Mass as soon as possible. In short a good Catholic who believes what the Church has always taught will put their soul in jeopardy if they attend a Novus Ordo parish on a regular basis. It's falling apart and will soon be gone. Only tradiditional, faithful Catholics who carry their cross, do not make excuses for their sins, will be left. We already know that the sacraments where instituted as a means of grace and a path towards Heaven. You need to be telling the "who am I to judge" crowd about the sacraments and stop singing to the choir.

And I know the "who am I to judge" crowd can't accept the truth and are shocked by it. But they need to be shocked. John the Baptist and Christ Himself were not some passive milk toast hippie feel good do gooders. They boldly preached the truth, while showing mercy and loving the poor, they were just and never compromised and both were hated and killed by the world. That doesn't happen in the Church today at all and how sad that is. How many souls are being lost, how many souls are being deprived of the grace of the Annointing of the Sick all because pastors of souls don't care enough about helping them save their souls, to tell them the truths of the Faith.

Interesting. I think it's also worth noting that the change from "unction" to "anointing" was just an English-language occurrence, without a corresponding change in Latin or the Romance languages. One could still say 'Unction of the Sick".

That's the spirit! Thank you father and a blessed Christmas to you!

I'm wondering who(m) you intend to blame when you say, "you find priests who do not know the names of their parishioners".

G thanks for the update, J-BS

Yes, just keep teaching the Truth as set forth to us by Holy Mother Church, and the Truth will set us all free!
(I personally prefer to think of "Holy Days of Obligation" as "Holy Days of Privilege", just to keep myself on track with the real gift being offered for our salvation.). Keep Christ not only in Christmas, but in all we do.

And BTW, I am joining the Anonymity club here due to what has transpired here recently.

My mom used to tell us a story that when she was about age 10 in 1927, she had such bad infections in both ears the doctor told her mother to "call the priest," (code for, "get her Extreme Unction because medicine can do no more for her and she will probably die.") The priest came and gave her Extreme Unction. During the night, the infections burst, and her ears began to drain. By the next day, the fever was gone and in a few days she was back to normal.

When she was about 60 she was diagnosed with colon cancer. They wanted to operate immediately and her prognosis was not good. Before she went into the hospital, she received the "Sacrament of the Sick" from our parish priest, and "hands-on" prayers from a Catholic Charismatic Prayer Group that met at the parish. After the operation, the doctors reported that although the polyp itself was cancerous, it had not yet broken though the intestine wall, and they were able to excise that portion of her colon, but that no radiation or chemotherapy was necessary. Her doctor told her, "You are a very lucky girl." :-)

At 89 she developed Congestive Heart Failure. While in the hospital for that, she got the flu. As a result of that, she went into respiratory failure, and the thought she was a goner. I called a priest. He came, heard her confession and administered the Sacrament of the Sick. She recovered and a week later came home.

When she was 94 she had a very bad night one night, but could not tell us what was wrong. We called a priest, and he came and administered the Sacrament of the Sick. We then took her to the hospital to have her checked out, and they said she'd had a mild heart attack. The doctor was quite sure she was very dire. But then they did heart tests, and the doctor told me her heart was much stronger than they thought! She came home a few days later.

Last February she became very weak and ill. We took her to the hospital, where they diagnosed pneumonia. While still in the ER, we called for a priest. He administered the Sacrament of the Sick and told us to say a rosary. We did. For 8 days she seemed to be getting better, but on Day 9 the antibiotics seemed to stop working, and her infection reasserted itself. On Day 10 a different priest came in to once again administer the Sacrament of the Sick. On Day 11 it was apparent it was only a matter of time. In late morning yet another priest came in (saying he just wanted to check in and say hello, seeing she'd received the Sacrament the day before), and seeing she was dire, and seeing she was clutching a small crucifix which I had given her, with my permission began to pray the Prayers of Commendation of a Soul to God. He then gave her an Apostolic Blessing and granted her a Plenary Indulgence. She was wearing a brown scapular (she had worn one for most of her adult life), a Miraculous Metal, and a St. Benedict Metal. The priest had me receive Viaticum in her stead, since she could no longer take anything by mouth. A few hours later (with my brother at her bedside) I left the room briefly to go to the bathroom, and I truly expected that when I returned she would be sitting up in bed and asking for something to eat. But it was not to be. She passed into Eternal Life at 7:32pm that evening. She was 98.

Cont>
When she was in her 20's my mother completed the 9 First Fridays to the Sacred Heart of Jesus (she probably did many more). Our Lord promised to St. Margaret Mary, among other things, "I promise you, in the excessive mercy of My Heart, that My all-powerful love will grant to all those who communicate on the First Friday of nine consecutive months, the grace of final penitence; they shall not die in my disgrace, nor without receiving their Sacraments, My Divine Heart shall be their safe refuge in this last moment."

It is tragic that we do not avail ourselves to the helps God has given for our health and well being. How offended He must be that we do not turn first to Him for help, and then, secondarily to science and mankind for assistance. By our actions we show we don't really believe He has the power of life and death. What a faithless generation.

P.S. Perhaps it was really Anon-1 who does sign off that way and his finger slipped on the keyboard. =)

Sorry, the P.S. was for the next thread. I am confusing myself—perhaps I am having a “crise d’identité.”