HAVEN'T WE MOVED BEYOND THIS COMPLAINT AND DISCUSSION YET? EVIDENTLY NOT! 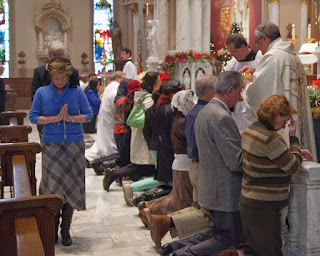 Here at Saint Joseph Church Holy Communion is distributed behind the altar railing (newly reinstalled) at four stations. Our laity have a choice to either kneel and receive (and they do so either receiving Holy Communion on the tongue or on the enthroned palm) or they stand. The majority, though, choose to stand receiving either on the tongue or in the hand. No problem with this diverse method and it works very well and is not divisive in any way whatsoever.

Our 12:10 PM Mass each Sunday in the Ordinary Form is celebrated ad orientem for the Liturgy of the Eucharist and the priest and deacon alone distribute Holy Communion to communicants kneeling at the full length of the altar railing (it actually takes less time with two distributing to kneeling communicants than four distributing to people coming to a fixed station). The last Sunday of each month the 12:10 PM Mass is an Extraordinary Form High Mass. Kneeling or standing are perfectly acceptable in the OF Mass and if there is a need perfectly acceptable in the EF Mass. No one is denied Holy Communion for standing at Communion time for Holy Communion in our EF Mass!

So I found this interesting when I read it at


What should you do if someone in the Communion line chooses to kneel to receive?
The short answer: give them Communion. And leave it at that.

There’s been some discussion about this today on social media; a communicant tells of kneeling to receive recently, and being lectured by the priest after Mass that “we stand at this church…the bishops want us to stand.”

Anyone distributing Communion needs to be aware of this, from the 2012 GIRM:

The norm established for the Dioceses of the United States of America is that Holy Communion is to be received standing, unless an individual member of the faithful wishes to receive Communion while kneeling (Congregation for Divine Worship and the Discipline of the Sacraments, Instruction, Redemptionis Sacramentum, March 25, 2004, no. 91).
When receiving Holy Communion, the communicant bows his or her head before the Sacrament as a gesture of reverence and receives the Body of the Lord from the minister. The consecrated host may be received either on the tongue or in the hand, at the discretion of each communicant. When Holy Communion is received under both kinds, the sign of reverence is also made before receiving the Precious Blood.

An earlier edition of the GIRM (h/t Steven Greydanus!) instructed the minister involved to catechize someone after Mass on the proper way to receive; that instruction was removed in the 2012 edition.
Priests, deacons and EMHCs: this should not be an issue
Posted by Fr. Allan J. McDonald at Friday, December 04, 2015

Well Fr, we never can move on, particularly when a reporter working with one the most Radical Misrepresenting Traditionalist social media sites decides to broadcast the issue in a shaming kind of manner, the same manner of many other "so-called" Catholic blogs.
Here is the source: http://www.churchmilitant.com/news/article/priest-shouts-go-away-after-churchmilitant.com-journalist-knelt-for-holy-co#.VmEKITtYqsp.facebook

Julian, we might have different personal tastes. Not calling these people out in this manner is exactly what brought us to where we are now.

Julian Barkin said... Well Fr, we never can move on, particularly when a reporter working with one the most Radical Misrepresenting Traditionalist social media sites decides to broadcast the issue in a shaming kind of manner, the same manner of many other "so-called" Catholic blogs.

We never can move on, particularly when ignorant members of the clergy, and the laity as well, make an issue out of someone kneeling for the reception of Holy Communion, a venerable ancient practice of the Roman Rite of the Catholic Church.

DJR, it's one thing to have a discussion in joy and a positive manner, to try and counsel the ignorant priest as an act of spiritual mercy. It's another thing to use the Internet to shame a priest outright after such incident. Now the priest is a hypocrite and guilty of that lack of conduct after his homily for advent. But it doesn't help the traditionalist cause when people cry foul in public often. It only makes ignorant priests more willfully ignorant, middle of the road priests never want to listen to those sources, and Traditonalists look more and more like the stereotypes lie-berals give them.

Public exposure like this should be a last resort after all other options are exhausted, and only with issues of grave moral impetus when all levels of hierarchy including and up to Pope Francis ignore you or defend sin and evil. Method of reception of communion is not a grave moral impetus. if the priest only does communion on the hand, then accept it and talk after.

Find another Church...a Priest that dumb and hostile is not worth fooling with.

I associate standing to receive Communion with the Eastern Churches rather than the Protestants. The tradition in the Anglican ecclesial community was to receive kneeling; at the time of the Reformation the more extreme Prots would receive sitting (following inaccurate medieval depictions of the Last Supper).

In EF Sunday Masses it is usual for the priest, before the sermon, to remind 'any visitors' that Communion is to be on the tongue and (if possible) kneeling. In a Novus Ordo Mass where kneeling at the rail is the parish norm, if the bishops allow CITH the communicants have the choice and the server knows from the position of the hands where to hold the Communion plate.

I checked the article that young Julian found so offensive and the photograph accompanying it is of Fr McDonald's EF Mass! I never receive in the hand or from a lay person - that's my prerogative. But if everyone else is standing, I stand. I was amused when the E&W bishops tried to dignify shuffling forward to receive Communion as the 'Communion Procession'. Sorry, your Lordships. A queue is a queue is a queue.

Julian Barkin, your constant name-calling and puerile mocking of your fellow Catholics has become tiresome. It says more about you than them. Father, why do you publish his continual diatribe?

JN I noticed that familiar photo too!

Anonymous at 8:58, are you by chance one of the other bloggers with an actual name and Blogger profile who doesn't agree with my statements, opinions, and my stance against Radicals Misrepresenting Traditionalists? If so, do re-comment under such name. Go ahead and show me who you are. If not ... hide behind your shadowy veil then. At least I have the courage to blog under my real name, and that was intentional.

I also prefer calling "a spade a spade." When I am calling people RMTs, my shortform for my title, that is exactly what they are, because true Traditionalists attending the Latin Mass (or just plain obedient to Holy Mother church) do not:
- Call Vatican II a sham, state it is a faulty council, etc., saying it's brought the Church to Hell
- Call the Novus Ordo evil, gravely sinful, an occasion that damns the soul, etc.
- Think that the ONLY solution in the Church to cure its ill is the Latin Mass
- Blatanlty act as calumnators, or detractors, for Pope Francis and other priests online and in person, with their blogs online or gossip in person, like those drugstore tabloids but in the Church.

And let me tell you being a spry 32 year old PRACTICING adult male in the church .... this "garbage" puts us Catholics to shame, especially if we partake in the Latin Mass, even just one bit or occasionally. In fact it makes people like myself NOT want to partake in Traditionalism.

How about you take this one lesson, if anything. Maybe there is an ACTUAL good reason for Pope Francis to use such langauge as I do ... because there are plenty of examples out there, between blogs and commentators. You aren`t making the overall image of Traditional Catholicism appealing online and in person with such example. You are making it villified, and deserving-ly so (thought by its nature, un-deserving-ly so).

Maybe if you and those others collectively did, I, as well as other people like Fr. AJM, Professional Catholic Apologist Dave Armstrong, Mark Shea, Fr. Longenecker, etc., could easily ``lay down our arms`` and focus more energy on positives of Traditionalism, instead of having to put out online fires that scare people away from Traditionalism.

As for getting me kicked off of Fr. AJM`s blog? Let him decide, and if he wants an inquiry of my character, he can gladly see my blog under my profile name, find my "about" page, and email me to ask some details. I'll gladly tell him my personal and Faith story. Let it also be said that Fr. AJM has been quite the fair moderator of his blog, allowing much other "drudge" that I'm sure the majority of people would say, as garbage, and that would include your comments and others.

Finally anonymous, instead of wasting time crapping on people like me, maybe you should figure out how to bring a more appealing "face" to Traditional Catholicism so that I can do other things with my time, and we can be united in stead of divided. That's what Jesus wanted of all humanity, especially Christians.

Anyways, that's enough here. Reply if you see fit, but one rebuttal to an anonymous face is enough for me. Pax, Julian.

On the Feast of the Assumption this year the Oxford Oratory celebrated a Missa Cantata in the older Rite. The congregation is more used to the Novus Ordo Latin Mass (most sang the Pater Noster along with the priest!) Communion at all Masses is kneeling and at the rail, and one middle-aged lady put out her hands, one assumes simply out of habit. The priest placed the Host in her palm and moved on.

Should the server have reminded her by the simple expedient of holding the plate under her chin? I would have been tempted to do so, but the priest was more charitable. But then he was an intolerant conservative and not a tolerant liberal like the priest in the Churchmilitant article which Julian linked to.

Julian, you're own words have proven my point. Father accepts "Anonymous" posts, if you have a problem with that, then take it up with him. I've seen your blog, I won't comment on it so as not to be uncharitable.

However, I do know that you publicly accused, on your little blog, a brother and his wife, validly and sacramentally married in the Catholic Church of living in adultery which was an outright lie. I think it was Vox Cantoris if I am not incorrect, right?

You come on here and talk about "calumny." You need to rethink a whole lot of what you say about others. You tear down people, you have done nothing to build up anything. You owe Vox a public apology. Did you go to confession for that one?

You should be ashamed for what you have done.

Protestants do not receive Holy Communion. At most, they participate in a prayerful ritual in which they eat holy bread blessed by their minister.

The bread is not holy because their minister cannot bless anything but his child or dog.