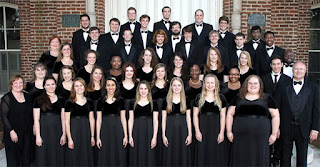 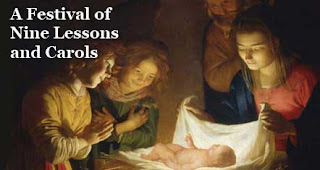 Mercer University, a Baptist university here in Macon and a wonderful university at that, has a fabulous music program. For the past three years we have opened our church to their Mercer Singers and Women's Choir to sing the Church of England's "Festival of Nine Lessons and Carol."

It is so popular in Macon that they have two performances, one Friday night and the other Saturday night.  I read the nine lessons for Friday night's celebration wearing cassock, surplice and stole. Was that kosher for me to preside in my Catholic Church in a Church of England liturgy performed by a Baptist University choir? I thought it was marvelous! How about you?

The singing was magnificent and powerful and when the congregation was asked to stand to sing some of the carols along with the choirs I thought that the predominately Southern Baptist and United Methodist congregants in our church would blow the windows out of their frames so powerful was the participation!

(Wikipedia) The Festival of Nine Lessons and Carols is a service of Christian worship celebrating the birth of Jesus that is traditionally followed at Christmas. The story of the fall of humanity, the promise of the Messiah, and the birth of Jesus is told in nine short Bible readings from Genesis, the prophetic books and the Gospels, interspersed with the singing of Christmas carols, hymns and choir music.

The first Festival of Nine Lessons and Carols at King's College, Cambridge, was held on Christmas Eve in 1918. It was introduced by Eric Milner-White, the Dean of the College, whose experience as an army chaplain had led him to believe that more imaginative worship was needed by the Church of England. The order of service was adapted from the order created by Benson for Truro Cathedral 38 years earlier, which was based on an idea of George Walpole, at the time Succentor of Truro Cathedral, and the future Bishop of Edinburgh .[4]The first service at King's largely followed Benson's original plan, including the Benedictions before each reading, several of which were later amalgamated by Milner-White into his Bidding Prayer.
Posted by Fr. Allan J. McDonald at Sunday, December 06, 2015

Her in Atlanta, the Cathedral of Christ the King in recent years has hosted a "Lessons and Carols" service, presided over by the archbishop. Think it is held around 730 or 800 Saturday night after the Vigil Masses. I would assume he would wear a cope for that since of course it is not a Mass. At this time of year, some Episcopal churches use it in lieu of Morning Prayer service or Holy Eucharist. I think Presbyterians have that service too---one of whom told me the best thing about that service is "no sermon"---and Presbyterians can be known for their long sermons!!!!