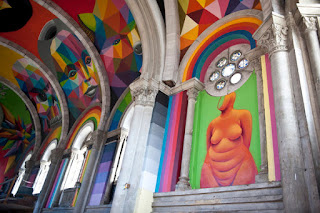 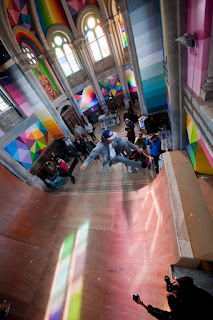 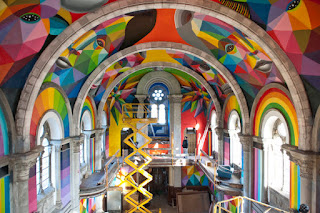 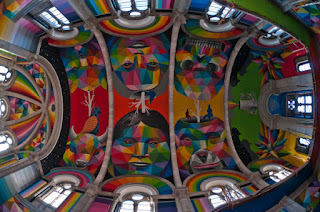 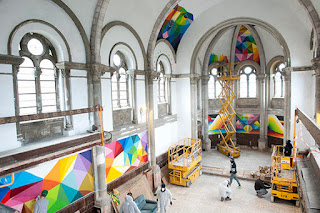 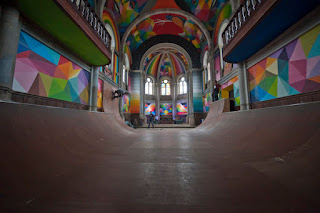 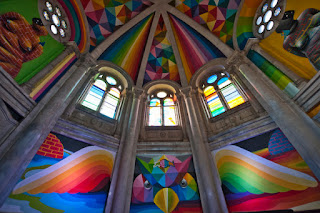 Looks like somebody drove a paint truck inside and blew it up.

Unlike communism which took over churches by force in eastern Europe and Asia minor, secularism takes them over by the church abandoning their facilities and selling them for profane uses.

In Tblisi, in the Republic of Georgia, the Latin Rite Cathedral was forced closed by Stalin and then turn into a gymnasium. Other churches were turned into concert hall and had the seating reversed to face the organ in the choir loft.

After the fall of communism in Georgia, the state gave the cathedral back to the Latin Rite bishop who then restored it. Teenagers complained that their gym was being turned into a cathedral as they did not know it had first been the Catholic Cathedral.

I pray that this skating rink in Spain will have the same thing happen in the future when secularism falls as it surely will.

I did not realize that Spain had gone the route of secularization. When I was there in the late 70's, it was about the most traditionally Catholic country I ever saw. You don't hear much about Spain these days. I had hoped that was because it was quietly traditional and politically quiet. Guess not. I don't get out much any more...don't want to.

I think it's awful, but...I'm going to seek the silver lining here.

The artist who did the painting is clearly talented. Aside from a couple of the images that look like saggy nude people, I like his work.

I actually think sacred artists, who adorn churches, can learn some things from this. Such bold artistry, if devoted to the sacred, could be awe-inspiring.

They've gone all the way to the dark side, even homosexual weddings.

Yes for its secular use it is kind stunning and for a skating rink no less. If these bold colors had a more religious theme to them, I think it would work but not necessarily in this neo-gothic/Romanesque structure but in something more modern. Indeed though there is artistic talent in all this.

Seriously? A church shouldn't be a source of sexual sin. That naked breast statue might make a few constitutionally weak boys and men commit sexual sins of the flesh and violations of life. You know what I mean?

Strange how Spain was still Roman Catholic until 1975 when Francisco Franco passed away, then everything started downhill. Under Franco and I know he was a "Fascist" and bad bad man, well look what Spain is now and you tell me its better. The same goes for Chile under Augusto Pinochet, once a stronghold of Catholicism now run by anti-Catholics. Oh sorry, he was a bad bad man also, but look at Chile now another formerly Catholic country.

The fact the the structure, which was a church, is now called La Iglesia Skate
says, if not everything, at least enough. It is a name which is reflective of the sad state of Catholicism in Spain and other parts of Europe.

1) There is no story with this picture series, so my question for you is this: Is this a Church in Spain? Or have you committed the common Southerner's error of labeling a church dominated by Mexicans "Spanish"? I only ask, because Mexicans resent being called "Spanish", since that is merely the language that they speak. I think by now, most Europeans don't call Canadians and Americans "English" just because we speak it.


2) The artwork is quite questionable. Much of it reminds me of the work of Mati Klarwein, who is known as the painter of the album covers for Santana Abraxas and Miles Davis' Bitches Brew. Since this is both sexualized and secularized, I would have chosen a different word than "Magnificent" in the headline. But hey, Father, it's YOUR blog...

CO above the first photo on my post is a link to an article that says it all--and it is a Church in northern Spain. You have committed the terrible error in your false accusation about southerners in general and this person particular. All you have to do is to press that first sentence above the photo and your ignorance will be turned into knowledge in an instant!

Magnificent is Italian hyperbole of which I am quite gifted as well as tongue in cheek not to mention a bit of snarkiness and sarcasm. But I don't expect Sheldon types to get it always. :)

Sorry Father, I didn't mean to paint with so broad a brush. There's a lady in my parish who announces all sorts of activities "For the Spanish" at my parish every week and it drives me nuts.