CAN PROGRESSIVE LIBERALS IN THE CHURCH BE ULTRA-TRADITIONALISTS WHEN IT COMES TO THE LITURGY AND THE KING JAMES VERSION OF THE BIBLE AT CATHOLIC LITURGIES, KOSHER OR NOT? 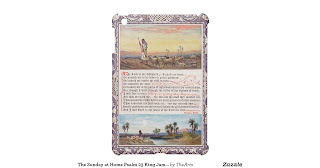 23 The Lord is my shepherd; I shall not want.
2 He maketh me to lie down in green pastures: he leadeth me beside the still waters.
3 He restoreth my soul: he leadeth me in the paths of righteousness for his name's sake.
4 Yea, though I walk through the valley of the shadow of death, I will fear no evil: for thou art with me; thy rod and thy staff they comfort me.
5 Thou preparest a table before me in the presence of mine enemies: thou anointest my head with oil; my cup runneth over.
6 Surely goodness and mercy shall follow me all the days of my life: and I will dwell in the house of the Lord for ever.

Even though I have never been a Protestant, I was instantly brought back to my young elementary school days in Augusta when I recited this version of the Psalm at the funeral. My best friends who lived across the street from us were Methodist and around my age. For Sunday school, they had to memorize Psalm 23, the KJV of it.  They also had to memorize many other Bible passages.

They asked me if I would learn it with them. And learn it I did. In fact even in the public elementary school that I attended at that time, we would recite it as a part of our morning prayers which also included the recitation of The Lord's Prayer (Protestant version). As a young child I vacillated between saying and not saying its doxology because I could not find anything offensive about it other than Catholics didn't use it and Protestants did. Sometimes, the minority of Catholic in the classroom would make the Sign of the Cross, but not consistently and I would and wouldn't. This would have been in the 4th and 5th grades as I recall.

I would say that more than a few times, I've been asked by Protestant fiances to have the King James Version of Holy Writ read at Nuptial Liturgies. I would always say no but in many cases the version they wanted was so superior to our lectionary's version. It was a bit embarrassing to say no.

One time, as I recall, without my permission and in defiance of me I think, the lector pulled out a piece of paper at the Nuptial Liturgy and read the King James Version anyway. O my, ecumenism!

Now for liberal progressive Catholics. Aren't there any that would prefer the Extraordinary Form of the Mass?

Just think of the Anglicans and how liberal they are yet many of them are so high church that it makes Pope Pius XII look like a Unitarian liturgically speaking.  And these Anglicans endorse female priests, same sex sex married or not sex and all sorts of Unitarian ideologies.

This is Saint Mary the Virgin Episcopal Church in Manhattan also known as Smokey Mary's given the volume of incense they use at their "mass." 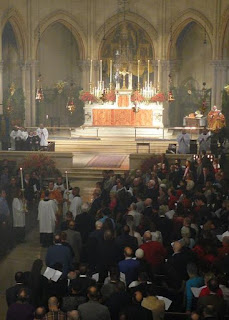 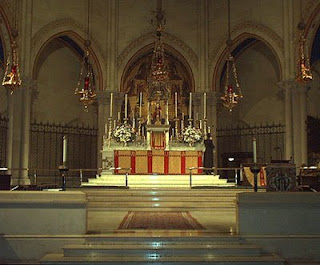 The KJV is the best because it is poetry and exquisitely written. For study, I have always preferred the Oxford Annotated Bible. RSV is ok, but I tend to start yawning after a while. The Jerusalem Bible is pretty good, especially for some of its more inspired translations, such as Gal 5:12. LOL! I still refer to my Greek NT some if I am discussing stuff with colleagues who are still in academia. I no longer have my Hebrew Bible because I threw it off a bridge over the Mississippi River in Memphis after Dr. Crenshaw's "Hebrew Exegesis of Job" course. Yes, alcohol was involved...

Traditional Anglicans prefer not just the KJV but also the 1662 BCP; they deplore the modern habit of having the Eucharist replace Morning Prayer on Sundays and the fact that the sacrament is offered to all and sundry; they would perhaps receive once a month after due preparation. Needless to say, the casual attitude shown by most modern Catholics towards Holy Communion would be equally deplorable.

The Anglo-Catholic tradition followed the Oxford Movement in attempting to recover the English Church's pre-Reformation practice. In many cases it ended up simply aping Rome. The last edition of the Knott Missal incorporated the 1955 Bugnini revision of Holy Week, and after V2 there was a widespread adoption of Roman liturgical changes. Some Anglican Benedictines followed their more progressive Roman brethren and threw out Latin and Gregorian Chant.

In 'Brideshead Revisited' cousin Jasper tells Charles Ryder, just arrived at Oxford: 'Steer clear of the Anglo-Catholics - they're all sodomites with unpleasant accents'. Robert Runcie, a former Archbishop of Canterbury, recalled the camp atmosphere at his theological college where the students were all given girls' names.

Anglo-Catholics do not endorse female priests or bishops, which is why many of them swam the Tiber - despite the fact that Catholic priests told them that Rome would ordain women sooner or later. There are some who like to taunt Catholics with the fact that their liturgy and music are more authentically Catholic than what prevails in most Catholic parishes, and they have a point.

Why would liberal progressive Catholics prefer the EF Mass? It represents everything they dislike. Some people may be conservative in religion but left-liberal in politics, but I suspect not many. Rather more, perhaps, are conservative politically but liberal when it comes to liturgy. But this is only a supposition.

King James believed that a single ‘authorized version’ was a political and social necessity. He hoped this book would hold together the warring factions of the Church of England and the Puritans which threatened to tear apart both church and country. Most of the translators, however, were clergymen belonging to the Church of England, but at least some had Puritan sympathies.

King James favoured the hierarchical structure of the Church of England and wanted the new translation to keep words that supported a bishop led hierarchy. In keeping with James’ preferred views on church government, he specified, “The old ecclesiastical words [are] to be kept; as the word church [is] not to be translated congregation.” (I personally believe that congregation is a better translation in some instances.) King James also ruled that only his new Bible could be read in England’s churches. The translation rules of King James can be found here. The political motives of King James had a direct influence on the translation of the KJV."

"The translators of the KJV 1611 were untrained in Koine Greek.

Koine (“common”) Greek is the original language of the New Testament. Koine Greek had been a dead language for over a thousand years when the KJV was published for the first time in 1611. The translators of the KJV didn’t even know what Koine Greek was. Some people believed that the Greek language of the NT was a unique, Spirit-inspired dialect. It was not until the late 1800s and during the 1900s, when tens of thousands of papyri documents were discovered – many written in Koine, that we could begin to understand the language more fully. Unlike the translators of the KJV, modern translators of the New Testament are scholars of Koine Greek."

Anonymous @ 10:13, all that being true as I learned in college, seminary and grad school, I still prefer the KJV. As I said, I prefer the Oxford Bible for study. But, I forgive King James his political preferences and continue to prefer his English. There are plenty of "shortcomings" in most modern translations, as well.

If I need an English version, I definitely use the Challoner version, but I love the Geneva Bible.

The Lord is my shepherd, I shall not want.
He maketh me to rest in green pasture, and leadeth me by the still waters.
He restoreth my soul, and leadeth me in the paths of righteousness for his Name’s sake.
Yea, though I should walk through the valley of the shadow of death, I will fear no evil; for thou art with me: thy rod and thy staff, they comfort me.
Thou dost prepare a table before me in the sight of mine adversaries: thou dost anoint mine head with oil, and my cup runneth over.
Doubtless kindness and mercy shall follow me all the days of my life, and I shall remain a long season in the house of the Lord.

These days, though, I'm mostly using the Clementine Vulgate.