WAS IT THE FEAR OF TERROR OR IS IT SOMETHING ELSE KEEPING PEOPLE FROM PAPAL EVENTS AT SAINT PETER SQUARE? 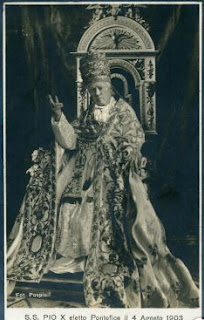 At this morning's Mass for the Solemnity of the Immaculate Conception in Rome and the opening of the Holy Year of Faith, only about 50,000 pilgrims gathered for this event which should have had at least 100,000 which the square can accommodate.

Okay, it isn't peak tourism time in Rome in December. Okay there is a threat of terror in Europe, with St. Peter's being a primary target. I get that, but 50,000 were there!

Even without tourists in Rome or at least not as many, Immaculate Conception is a national holiday in Rome and Italy. There should have been enough Romans to pack the square has would have been possible before tourism was so prevalent in the world.

Is the loss of papal pageantry part of this loss of interest in papal events at the Vatican?

Some say that the jewels, feathers and bling of the pre-Vatican II papacy (somewhat recovered by Benedict) simply borrowed from secular rulers who used these to prop up their authority. That is correct!

Yet, the Catholic Church has always baptized secular, pagan elements in society, especially in government and made good use of these to point to our Sovereign Lord, Jesus Christ, Crucified and Risen and reigning now as King of all creation!  These pointed to Christ the King and the Kingdom of heaven which is about redeemed wealth given to all especially the poor!

I know that the poorest black Protestant churches in the south want their ministers to live well, have nice rings, better homes and drive nice cars. Wealth for everyone, not just a privileged class, is part of heaven.

The Church points to that even in her bling!
Posted by Fr. Allan J. McDonald at Tuesday, December 08, 2015

I doubt it was fear, or doubt it was completely that. As Fr. Z and other Vatican commentators have noted, fewer and fewer people are coming to Francis' events. There must be a lot of neo-pelagian promethian rosary clinkers in the Church feeling mighty alienated! Not only is it fewer laity, but fewer clergy and religious are coming as well, I'm guessing this climate change skeptical will be the nail in the coffin. Holy Virgin of the Immaculate Comception, ora pro nobis!

Ps, did you ever update us on the status of the basilica designation at St. Joseph's?? I hope it's going well!

Is it possible for Donald Trump to be the President of the USA and the Pope too?

The first Eve was fashioned by God from a man, and this man we know as Adam. The Son of God, the new Adam, was fashioned according to God's plan from a woman, the New Eve, who we honor as the Blessed Virgin and the New Eve.
The first Eve was created without sin. The second Eve was conceived without sin.
The first Eve was created directly by God, from a man, without the aid of a human mother; the second Adam was created through the overshadowing of the Holy Spirit without the aid of a human father.
The first Eve was seduced by the serpent and was complicit with the first Adam in bringing sin and death into the world. The second Eve never knew sin and would, being the obedient instrument and servant of the Divine Will, crush the head of the serpent.
The first Eve was driven from Paradise because of her disobedience to God. The New Eve would be first among those in the Heavenly Paradise because of her willing obedience to God.
The first Eve spoke her assent to a Fallen Angel and this brought sin and darkness into the world. The New Eve spoke her assent to a Glorious Angel and this would bring Salvation and Divine Light into the world.
The first Eve disobeyed God and so her life would be one of sin and its deathly consequences. The w Eve, conceived immaculate, would escape sin and its deathly consequences.

Papal overexposure is part of the problem: he's on TV or in the papers virtually every day, after all, so the novelty is bound to wear off. While seeing Pope Benedict today -- for only the third or fourth time in the last two and a half years -- made quite an impact, judging from the applause from the congregation.

If I was pope, I'd appear in public just two or three times a year, and NEVER give interviews!

On second thoughts, perhaps the problem is not with the number of public appearances, but with the constant filming and omnipresent photographers. Pope Francis seems to be at his best when meeting people one to one (it was charming watching him greeting people after this afternoon's ceremony at the Spanish Steps), but sometimes I wish they'd just turn the cameras off.

It wasn't fear.....NOBODY CARES ANYMORE! You just don't get it. People can't love what they do not know. The Catholic has not been taught for 50 years. At least 2 generations have no idea what it means to be a Catholic anymore.

Don't you think people are also frightened of being in crowds because of terrorist acts committed recently? That is what I would suppose is happening.

I certainly will not attend any large public venues or fly commercial anymore. You can no longer feel safe in your own country thanks to years of Leftist, permissive, globalist, cultural equivalence reign. And, all of you morons voted for this so you wouldn't feel guilty for being white or called racist or bigot. Amazing...both the power of words and the low self-esteem of liberals. I really detest all of you (not hate...that is too personal...you don't deserve that degree of passion) and I wish that you could be targeted by Muslims specifically, but they will not knowingly harm their enablers. If we ever do end up in some post-apocalyptic waste land where anarchy rules, I hope I am armed when I see you wandering among the ruins wringing your little hands.

I am so sorry you are in the grip of so much bitterness and anger! I am praying for you.

But Eugene...You're tough and you're armed. I didn't know you were scared of anybody....Now you're talking like some liberal wuss.....

Well, Gob, there's scared frightened and trembling, and there is scared like in combat, which you control and channel into doing your job as you were trained to do. In today's world, I think we should consider ourselves in a combat zone and a little fear is wise.