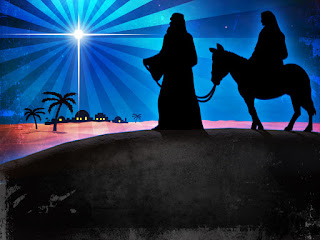 Last weekend in my bulletin letter as well as the announcements I warned people that our 4:30 PM Vigil Mass for Christmas would be the most crowded and that they should not reserve seats.

I mentioned our 6:30 PM Mass which features the Christmas Pageant by children as a prelude to Mass would be very full too.

Then I said the Midnight Mass would be packed but not standing room.

I finally said that our two Christmas Day Masses at 8 and 10:00 AM would be quite comfortable and peaceful and people could reserved as many pews as they wanted .

Then I lamented the proliferation of Christmas Eve Masses since the 1970's and how this has led to Christmas Day Masses being reduced in number with only a handful attending Mass.  I reminded our parishioners that before 1970 the earliest Christmas Mass began at the strike of Midnight. So the majority of Catholics, especially young families came to Christmas Day Masses of which there were many and all the way up to about noon.

Our 4:30 Mass had one or two vacant pews, no one had to stand as in years past.

Our Midnight Mass was full but not packed and plenty of available seats for latecomers.

Maybe a new tradition is beginning by an act of God!
Posted by Fr. Allan J. McDonald at Saturday, December 26, 2015

Many parishes in my neck of the woods are adding more Xmas eve Masses and just having one day Mass.

I think the bigger problem is that many Catholic children grow up thinking that being Catholic only means going to Mass Christmas Eve and Easter Sunday, in addition to some secularized awareness of the Initiation Sacraments.

So, God inflicted suffering on those who were impacted by the storm - 16 dead, some roads washed out, fallen trees on houses and power lines, "accidents galore" - so that you could see more people in church on Christmas day. Interesting theology, that.

This past week, I said to my wife that if I were a priest, I would celebrate four Masses for the Nativity of the Lord. The Vigil at 8 p.m., Mass at Midnight, Mass at Dawn at 8 a.m. and Mass during the Day at Noon. White vestments for the Vigil Mass and Gold for the other three. Also, with Saturday Vigil Masses, throughout the year, they begin no earlier than 7.p.m. Personally, I think people abuse the Vigil Mass availability. It doesn't take an act of God to push parishioners to the Christmas Day Masses. Just a pastor who doesn't make so many Vigil Masses available. In my four Christmas Mass scenario, the children's pageant would be at the 8:00 p.m. Vigil. Father, why TWO Vigil Masses? If anything, in my 8p, Midnight, 8a and Noon hypothetical, I would add a 10 a.m. Christmas Day Mass and have the 10 a.m. and Noon Masses have the Christmas During the Day readings. Where am I going wrong, Father?

If we only had the 8 PM Vigil Mass-there would need to be two going on simultaneously as the crowd would be too great. The elderly prefer vigil Masses and our 4:30 PM is primarily for an older congregation, but children are present.

The 6:30 PM Vigil Mass has the children's pageant and children's choir. We could not accommodate in our church that seats about 550 uncomfortably and another 100 or so standing the two Masses. We need two separate times for the Vigil or two venues--we have a gym that is nice but parking would be a nightmare as First Baptist is sandwiched between our Church and school and they have services too. Being downtown, we have only small parking lots between the two churches and people must hunt for street parking.

"So God inflicted suffering"--your theology is a bit corrupt and you are making connections where neither the Church or I do as it concerns those who attended or didn't attend our Christmas Eve and Day Masses. Interesting theology and connections you make. What catechism do you use?

You decided that God inflicted suffering, not I.

You "lamented the proliferation of Christmas Eve Masses since the 1970's and how this has led to Christmas Day Masses being reduced in number with only a handful attending Mass." (Oh, the horror!)

And you giggled that, following the "major Tornado warning, heavy rain, thunder, lightening, wind, hail and treacherous roads and accidents galore on the highways" that your wishes had been fulfilled and that "Christmas Day Mass was quite full and our 10 AM Mass was packed. We've not seen this many people at Christmas Day Masses since the 1980's!" (Oh, the bliss!)

To sum it up, and to make God your henchman, you suggest that, "Maybe a new tradition is beginning by an act of God!" Oh, the presumption!)

"An act of God." God has acted to produce suffering so that your wish for more people in church on Christmas Day would be realized. (Oh, the misrepresentation!)

No, God is not establishing a new tradition in response to your lament. Neither is God inflicting suffering on people in order to fulfill your liturgical preferences.

Hopefully you don't read the Scriptures as you read my comments; radical fundamentalism on your part is very unbecoming and a bit scary to say the least!

I read your comments and they are what is scary.

You said, "Maybe a new tradition is beginning by an act of God!"

Saying that the storm was brought about by God in answer to your lament regarding Christmas Day Masses is to make God responsible for inflicting suffering. It makes God your henchman, doing things that fit YOUR plans and YOUR wishes.

Oh, I read Scripture. And the Scripture I read says that we are to conform ourselves to God's will and that we are not to think that God does things according to our preferences.

You've got it backwards.

Now Sheldon, there are different literary forms in the Scriptures and even on my blog posts. You need to be able to distinguish sarcasm, hyperbole, humor, editorials and the like not on in Scripture but on this blog. Not all forms of writing are to be so facetiously literally interpreted.

And consider whether it is ever appropriate to turn peoples' suffering into "sarcasm, hyperbole, humor" so that you can score points in the faux liturgical wars you like to wage.

You are the amateur as you are clueless about the legal definition of "act of God." I will give it to you to lead you out of your ignorance and to show you that you must have a command of the English language, colloquialisms and other definitions:

An event that directly and exclusively results from the occurrence of natural causes that could not have been prevented by the exercise of foresight or caution; an inevitable accident.

Why do you waste time with fruitless arguments when you could be out helping the poor?

Mr. JBS - Why are you posting anything at all here when YOU could be out helping the poor?

Would you use "sarcasm, hyperbole, HUMOR" when speaking of a person undergoing chemotherapy for cancer or struggling with severe, debilitating arthritis? I think not. Why, then, would you turn the suffering of those impacted by recent storms into fodder for your blog?

There's no need to get hysterical. Father McDonald did not introduce the victims of natural disasters into this conversation. You did. Do you remember doing that? He helps suffering people. Did you know that?

Is it possible that Fr. was speaking tongue-in-cheek? I think you guys are getting way too upset over this.

Mr. JBS - While you were last reading and posting, three poor people went without help. Don't you feel ashamed?

I think this blog bears fruit, while you seem to think it does not. So, why do you spend time here when you could be doing something fruitful instead?

I think correcting the errors of others or challenging the theologically inept is fruitful.

I recommend study of classical rhetoric and logic. These make it possible to construct questions and arguments that are constructive and convincing. The various forms of taunting and insulting, on the other hand, seem usually to be employed either to prevent dialogue or as a prelude to violence.

In the Eastern Orthodox Church, the liturgical day runs sundown to sundown, not Midnight to Midnight as we call "days" in the secular world. So we really should not dintinquish or get "worked up" over whether someone attends Mass Christmas "Eve" or Christmas "Day." Probably a lot of Orthodox churches that have just one Christmas liturgy---on the Eve. Of course whether folks attend eve or day, they should be welcomed to come back before Easter!!!

Mr. JBS - ACH! Another three poor people have gone unaided while you spend your time posting ineffective self-defense missives on this blog.


You taunt, so are we to conclude you are planning violence?

Leaving aside the bickering of some recent exchanges, there is a problem concerning vigils and 'anticipated' Masses which raises its head at this time of year. Christmas Eve of course has its own Vigil Mass which is traditionally penitential (violet vestments, no Gloria, no Alleluia unless it falls on a Sunday). In the 1962 Missal it is celebrated after None (3 pm) unless, again, it falls on a Sunday. It was never envisaged that attendance at this Mass fulfilled the obligation for Christmas Day, which begins liturgically with First Vespers. This is followed by Compline, anticipated Matins and the First Mass of the Nativity (Missa in Nocte).

In the Novus Ordo the sung Propers of the Vigil Mass are retained, but the Gloria and Alleluia are included, white vestments are used, the Credo is sung, and crucially it can be celebrated after First Vespers. It therefore replaces the 'Midnight Mass' as the First Mass of Christmas, and attendance would fulfil the obligation even if the 1983 CIC did not allow attendance at any Mass after noon on the day preceding a Day of Obligation to count. Christmas was already unique in having three distinct Masses (night, dawn and day) and Bugnini has gaily added a fourth!

Anonymous @ 12:37, The poor can entertain themselves with their wide screen TV's and Obama phones while JBS composes. If they get bored with those things, they can slip on their new Nikes and take their I-phone they stole and head down to the basketball court and compare Glocks with the other homies.