AS IT HAPPENED TO CATHOLICS ONCE, NOW HAPPENING TO MUSLIMS, WHICH RELIGIOUS GROUP WILL BE NEXT? THE MORMONS? THE ORTHODOX?

These speak for themselves and should be a warning to the know-nothings of today!  Some of those who comment on my blog about their very own Church seem eerily like those writing for these papers way back when: 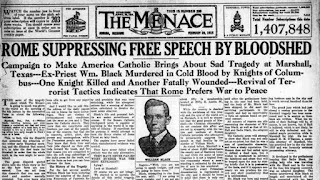 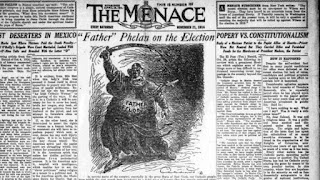 For many years, a statue of the venomously anti-Catholic Tom Watson (1856-1922) was on the Capitol grounds here in Atlanta. He wanted inspections of convents to be sure no one was being "forced" into them. Someone mentioned that back in the 1940s, the GBI (Georgia Bureau of Investigation) would inspect the monastery out in Conyers, just outside Atlanta. Guess they thought subversive Catholics were out there! Perhaps the anti-Catholicism in Georgia today is more subtle---"worship Mary", "drinking blodd"...you get the idea. About a generation ago, Atlanta's then-Episcopal bishop noted that when he came here, there was still a lot of "hot preaching" against anything looking Catholic (whether actually or not), like clergy in robes, altars, formal worship, etc. in Georgia's mountain areas.

Lest we forget too, many southern states voted for Hoover over Al Smith in the 1928 presidential election---by all accounts, normally Democratic states voting Republican for Hoover because of the "Catholic" issue.

Well, at least Georgia has come a long way since 1939, when then-Bishop O'Hara dedicated Atlanta's then Co-Cathedral of Christ the King (Georgia then was a one-diocese state, until 1956). At that time, there were maybe just 20,000 Catholics in the entire state---less than 1% of the state's population back them of about 3 million.

Although we may never have experienced such animosity personally ourselves, it is part of our history and identity as Catholics. Presumably, then, by exercising our moral imagination, we should be able to empathize with innocent Muslims today (innocent as opposed to those who are intent on going us harm).

Catholics are not the theological or moral equivalent to Muslims.

Plus, it's perfectly legal for the President to put a freeze on Visas for foreign countries. Jimmy Carter did it to Iranians using a 1952 law passed by a Democratic congress: Title 8, Section 1182 of the U.S. Code provides in relevant part:

So should President Trump seek to temporarily halt all visas from the entire region, he would be within constitutional bounds to do so.

What might that colossal bit of inconvenience do to the geo-political situation? It would broad cast that we mean business. that if the majority of Muslims are indeed peaceful "Amish in turbans", who harbor no ill will towards us, then they better step up and annihilate the ISIS and others in their midst if they want to enjoy the blessings of America in the future.

So... a wall is not unconstitutional. Neither is stopping visas. The DNC and RNC are wings of the same ruling party and they're both freaking out about the Trump plan which is a good thing.

It means we're over the target given how much flak we're taking.

Islam is unique among the great religions. It offers salvation in spiritual as well as in political terms. The spiritual salvation is contingent on complete submission to their political ideology. It is also absolutist. Every one must submit in this world. Those who do not must be punished. The punishment may be a tax but it is often death if the the Dhimmi (non muslim) does not submit. So, we have a situation where very basic human rights are denied to every one in the name of religion. Why are so many, including Catholics accepting of this totalitarian ideology as a respectable alternative lifestyle?

Given how many crèches I'm seeing in front of random Bible churches, I think it won't be but a few more years before the old anti-Catholic jibe about statues = idolatry falls into disuse. See, now that Protestants "get" the usefulness of statues to tell a story without becoming objects of worship, they'll understand where we were coming from all these years.

All that anti-Catholicism despite sharing the same Holy book.... 500 years of warfare and social repression based on differing interpretations of the SAME scripture.... how do we think Muslims, with a radically different Holy Book, will deal with us should they become a sizable minority much less a majority?

If Muslims are mostly Moderate (defined as what, exactly) then how do we explain the casual violence and near universal experience of Dhimmi status for Catholics the world over who are minorities in Muslim lands?

The flak does not necessarily mean you are over the_right_target.

I assume you do know that in its time Dhimmitude (“residence in return for tax”) was a progressive institution that demonstrated the relative tolerance of Islam compared with much of Christianity. It is you who characterize it as “punishment.” Yes, in some ways Christians and Jews were “second class citizens” and there is no question that the institution was applied more harshly in some places and times than others. But at least they were permitted to reside. On the whole, Jews preferred to live in Muslim countries as opposed to Christian countries due to the greater tolerance of the Muslims. As for the tax, well, this was for protection by the Muslim state and also because Dhimmis were exempted both from military service and the zakat tax that all Muslims had to pay. Moreover, Dhimmis were permitted to apply their own laws in their own court system and enjoyed many privileges that were denied to Muslims. Clearly, in today’s world there is little place for Dhimmitude and the institution has been eliminated in many Muslim majority countries. If you really want to get some facts as opposed to just engaging in polemics, read this:

This is something I have not understood about some of the reporting about ISIS by the way. If ISIS is truly applying Shari’a the choice for Christians is not “convert or die” as has so often been reported, it is “convert, pay the jizya tax, or die.”

You are an intelligent man. A Lawyer even. Surely you realize that the concept of Dhimmi is the classic shakedown, Mafia, protection racket idea.... it's the classic 2 tier system which all oligarchies eventually develop, only in Islam it's been institutionalized via religion.

So sure, Muslims aren't Mongols. But whereas Asia Minor was at one time 90% Christian, it's now 99% Muslim. All the great original Christian lands went from majority Christian to minority Christian over the course of the centuries under Muslim rule. People being hard wired to take the path of least resistance, and paying protection money being easier than fighting a shadow army of assassins, most people will opt to pay the protection money and blame anyone who resists as threatening their new found status quo.

Now, if we all just submit (Islam) and pay the tax, why we get peace. Peace to be Catholics in the closet. Peace to go about our lives quietly and secretly. But that's not what the Lord commanded of us. We are to make disciples of all the nations. And if that means we resist patently evil men in the process (which it does) then that's what we need to do not just for our lives but for the lives of countless people yet unborn.

Surrendering the whole world to such savages on the pious hope that we will be left alone - but unable to make converts, unable to make disciples of these nations, is a losers' gambit.

But that you are arguing for Dhimmi status says everything. One breath you say "most are moderates" and the next "but dhimitude isn't so bad..." tells me all I need to know.

I'm no fan of Donald Trump, and I don't even live in America, but he does have appoint when it comes to Mohammedans. It's not Buddhists and Parsees, whether new-comers or second-generation, who are causing havoc and mayhem.

Now yes, there are lot of good Mohammedans--just like there are lots of good Mormons. That doesn't meant their religion wasn't started by a nasty, violent megalomaniac faker. Just means there's some underlying good in people--which is nice.

And most Mohammedans aren't terrorists. If they all were, presumably you'd have no problem banning them. But what if 90% were terrorists--what then? 50%? 10%? To play Abraham's game, where do you draw the line?

With regard to Anon's point about the constitution--the constitution talks about rights of citizens, not would-be immigrants or tourists. But you should know by now that really the Constitution says whatever a majority of 9 non-elected elitist jurists say it does. Which is the big gaping whole in America's so-called democracy.

You give an interesting, if rather cynical, analysis, projecting 21st century critical analysis into the past. This has its place, of course, but you do realize, I hope, that some could say, and indeed have said, the same thing about the Catholic Church. Remember Tetzel? Of course, I reject such superficial critiques.
____________
Please explain how you get from: “Clearly, in today’s world there is little place for Dhimmitude and the institution has been eliminated in many Muslim majority countries” to “But that you are arguing for Dhimmi status says everything. One breath you say "most are moderates" and the next "but dhimitude isn't so bad..." tells me all I need to know.”

You are a philosopher. Explain it to me like I was a 6 year old.

Sorry but many provisions of the Constitution apply to noncitizens as well—all those that refer to “persons” as opposed to citizens for example.

In any event, as I have explained in another thread, the rights of citizens are also frequently, indeed typically, implicated in immigration.