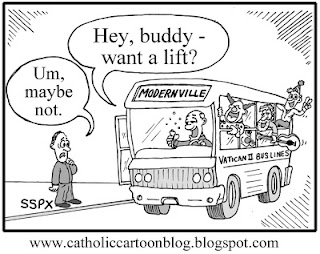 As a blogger who is thoroughly middle of the road leaning a bit right, it pains me to state the obvious. Blogs are radicalizing some Catholics and in a negative way as are Islamic extremists radicalizing Muslims over the internet. Of course, we haven't seen any Catholics beheading anyone or causing mass casualties, so Catholic negative radicalization isn't as harmful to society, but it is harmful to the Church and these Catholics themselves.

For example, when the new and glorious translation of the Mass came out, there was a concerted effort by the Praytell blog to whip progressives into a radicalized frenzy to oppose it and demand a 1998 version of English or simply maintain the highly inadequate 1970 version. Boy were they hopping mad and hell has no fury compared to a liturgist scorned.

Of course the same blog decried Summorum Pontificum although the most interesting comments came from SP's supporters and the most cogent ones too, which often got them banned. But we've been banned in better places.

Of course blogs radicalize rank and file Catholic laity and clergy and most of them turn the Liturgy into an idol and forget that the Liturgy, no matter the legitimate form, is the Holy Sacrifice of Christ renewed in an unbloody way which opens the way to the Eucharistic Banquet of the Body and Blood of Christ for those in a state of grace. There is also the banquet of God's word although it too very much a part of the sacrificial nature of the Mass.

Then on the other end is Rorate Caeli and Pewsitter. Often I think I just shouldn't read their opinions because it isn't healthy for my faith or my charity.  And there are others that really are whipping up neo-conservatives into a radicalized frenzy opposing Pope Francis and everything His Holiness stands for.

I have never experienced in the Church the polarization that is taking place and negative attitudes expressed publicly for the Magisterium of the Church and the person of the pope, be he Benedict or Francis.  It is a politicization of our Church leaders and down right nasty and unfortunate.

Oh how I long for the days when Catholics were told and they then obeyed, not to read anything that didn't have an imprimatur on it. Blogs need this too and it would be a healthy thing to submit to Holy Mother Church and wait for an imprimatur.

The blogosphere can be a very, very unhealthy place, indeed.

It's worth taking all the anger and bile on these blogs with a pinch of salt, as each incensed post is just a cry for someone, somewhere to give them attention. So they shout louder and louder, as readers become more and more jaded.

The main reason that these blogs, and the Internet in general, is having a corrosive impact on Catholicism is because they magnify differences between values and practices across the church. Twenty or thirty years ago, it mattered less that, say, German and African Catholicism were heading in very different directions, because each had little impact on the other. Blogs make us all too aware of how we differ from others, and this is bound to breed resentment.

For the record, the only Catholic blogs I read regularly are this one, Fr Ray Blake, Sandro Magister and the weekly Monday Vatican blog. I never liked Pray Tell, and haven't looked at Rorate for years.

Fr. AJM, you should not be pained to say what you have. If anything, blessed be you by our Lord for having the courage to do so. You are true in what you are saying, and a good number of them are poisonous to the soul, spiritually.

Thank God your blog is one of those that are spiritually balanced as a primary author (commentators, I cannot say the same,) that at least a "wired" young catholic like myself can come to, without being radicalized towards what professional Apologist Dave Armstrong would call, an attitude of being "quasi-schismatic."

God bless your work and continue doing what you are, regardless of other's opinions and discouragement.

I agree. The blogosphere can be a highly uncivil place. Unless one is consciously aware of the need for charity, it is far too easy to give in to the temptation to engage in character assassination. People behave so cruelly when they think they are speaking/acting anonymously.

I get so depressed by them that I don't even read my own blog these days.
Gaudeamus!

I disagree. Yes, comboxes can get quite nasty, and even some blogs themselves are quite nasty.

But overall the expression of diverse opinions is a good thing. The idea of an imprimatur for blogs is a scary one, even though (fortunately) it would never work. Divergence of opinion has been distrusted and frankly suppressed in the church since at least the First Vatican Council--the suppression of so-called 'Modernists' being one shameful example--and Pray Tell is a perfect example of the autocratic Second Vatican Council mentality, which is hell-bent on shutting down discussion.

So blogs have helped people become more aware of different strands in the church that they never would have been known about. Are there 'fringe' elements among them? Yes. But we never would have had Summ Pontif if it hadn't been for 'fringe elements' like the SPPX, who took the painful and courageous step of admitting that a sitting pope was dead wrong--something most of have been trained to think impossible. Those of us who are timid middle-of-the-roaders have a lot to thank the fringes for.

How many practising Catholics ever open a Catholic newspaper or log onto a Catholic blog? Long before the Internet, priests would exhort their parishioners to buy one of the Catholic papers on sale at the back of the Church, but most were too stingy to do so.

Rorate closed its combox after too many negative comments about Pope Francis. One doesn't have to agree with all its contributors, but it is usually well-informed. New Liturgical Movement is worth visiting, and if you are musical, the Chant Café (although it's gone off a bit lately).

For five years now I have been commentating on SecondSight blog (a spin-off from Quentin de la Bedoyère's column on science and religion in the Catholic Herald). It is not overly concerned with liturgy and isn't noticeably conservative; however it is refreshingly non-polemical and tolerates a wide spectrum of views. Of the other English blogs, Fr Blake's has already been mentioned. Fr Hunwicke's is the most entertaining and scholarly, and also good is the blog of the chairman of the Latin Mass Society, Dr Joseph Shaw.

I suppose I will have to accept the modern conflation of 'radical' with 'extremist' (how the English language has become impoverished over the last few decades, and the Brits are as much to blame as the Yanks!) The Internet does encourage overstatement, hence reference to 'bombshells' (as a former artillery officer I can assure you there is no such thing) or describing the new ICEL translation as 'glorious'. It's a vast improvement on the previous version but is by no means flawless.

I am, it goes without saying, moderate, balanced, discriminating and well-informed, with extremists to the right and left of me. Aren't we all?

The Catholic Thing and this blog and First Things and David Warren are my daily reads. Ray Blake and Crisis are weekly reads because they don't post as often. When a conservative blog gets too far out there I quit reading it but I don't mind a little bit of carping. Sometimes the mis-interpretations on the right or left are so unexpected that it's actually instructive to me about how the proper way to construct a message. In a way I think I've actually become a better presenter at RCIA from reading the fever swamps because I understand better how people can twist words to hear what they want to hear.

I view blogs and forums as places for free and open discussion, some humor, blowing of steam, the occasional rant, and internet fun. I don't think they should be taken too seriously. For serious theological discussion, I prefer email groups among like-minded or slightly disagreeing parties.

Do you pray for me? I pray for most of you. We all disagree from time to time. I don't agree with anyone 100% of the time. But unless completely dead in sin, we should expect as the price of opening a blog, and engaging in an argument the requirement to pray for our "opponent" or the opinionator of an opposing opinion.

I think Pope Francis is on to something in his repeated points that there is a certain unity found on the scaffold between the disparate brethren of Christ. Our differences matter and our disagreements count, but when placed before the firing squad or lined up with commies or Jihadis at our backs with guns pointed, we may find more in common via our bloodshed for Christ then all that separated us in life as we sought to serve Him and His Body.

But this will be so if before all else we seek the good for the other not just to vent our spleen.