This is the ideology of dance imposed upon the liturgy but it isn't liturgical dance, it is entertainment and not integral to the Mass at all, it is dance at Mass, it could be the Twist for that matter! But in the Extraordinary Form of the Mass, the Mass itself is the dance! Nothing imposed upon it as though it was an Argentinian Tango! 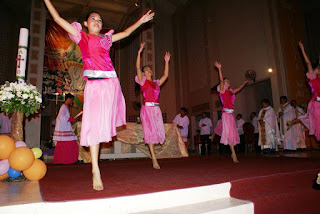 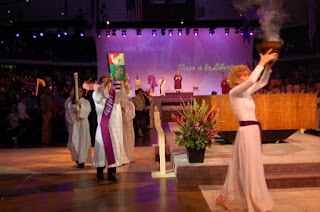 One commenter on another post denigrated the pre-Vatican II's Ordinary Form of the Mass for its choreography especially of the seminarians during the processions. He was referring to the marvelous 1962 Christmas Midnight Mass in England at a seminary chapel (now closed for lack of vocations).

In fact if you participate in the EF's Solemn Sung Mass with deacon and subdeacon you will see that the Mass is actually a dance, a minuet, if you will, with its strict choreography of processions and the movements of the celebrant, deacon and sub deacon as well as acolytes.

Unlike the liturgical dance, an ideology imposed on the OF Mass by modern liturgists and parish amateurs, in other words, dancing at the Ordinary Form of the Mass, in the EF Mass, the Mass itself, is the dance, especially in its most solemn expression.

The same thing happened with singing at the Ordinary Form of the Mass, music and aimless hymn singing was imposed upon the Mass but the Mass itself was spoken by the celebrant, lectors and the congregation. Hymns technically are not a part of the Latin Rite Mass in either of its primary forms. The Mass is the music of the Mass, its texts, all of them to include all the priest's parts as well as the laity's parts. This includes the Sacred Scriptures, all of them, not just the Responsorial Psalm and Alleluia! How many Catholics today have ever heard the Scriptures chanted at Mass?

How many priests sing their parts, starting with the "Sign of the Cross" and throughout the Mass? I'm speaking of priests perfectly capable of chanting their parts.

How many laity are forced to sing a hymn of some kind imposed on the Mass at the procession and at the offertory and Communion but never, ever hear the actual Introit chanted or invited to join in chanting at least the refrain of the official Introit, not to mention the Offertory and Communion antiphons prescribed for each Catholic Mass?

How many are forced to suffer through hymns at the collection of the offerings and at Communion but never, ever chant the Credo either in Latin or English or the Our Father?

And now for the ideology of the imposition of the priests' personality on the Mass--when did it begin and by whom?

One of the things that helped to destroy strong religious orders of nuns/sisters/monks/brothers in the 1960's was pop psychology imposed upon the communitarian aspects of religious life up until that point. The ideology of the "me" generation (narcissism) as well as self-actualization and emotional development turned traditional religious orders into a community of bachelors and bachelorettes. Convents which had numerous sisters opted to allow sisters to live alone in apartments or to live as couples in homes or smaller houses. The habit went from traditional, to modified to purely secular and of the most frumpy look possible. There was nothing attractive about the new ways whatsoever and no reason really to join these groups as we would soon discover and have discovered today. Mass or liturgies that were invented by various convents and monasteries and in no way resembling the traditional Mass replaced the official Mass with its strict rubrics. Creativity ruled the day and destroyed religious life as it is destroying the Church even to this day!

Father Eugene Walsh SS, the most famous  Sulpician liturgists espousing the ideology of a dumbed-down liturgy which had priests and lay ministers imposing their personality on the Mass, was not alone in promoting this but was at the forefront and inspired a generation or two of seminarians to do as he said and he was a bit authoritarian about it. I am a product of Sulpician priests and seminary training! Thank you very much!

He wanted the priest to use big gestures, smile a lot and show some personality. Ad orientem would have be anathema to his ideology! He wanted lay ministers galore, readers, communion ministers, greeters, and the like using their extroverted personalities to draw people into the church, Church and Mass. Lectors were to smile, create eye-contact, use dramatic gestures and voice inflections and lift high the lectionary when proclaiming "This is the Word of the Lord" with the emphasis on "IS." He also asked lectors and other proclaimers to hold the book rather than letting rest on ambo.

Priests were to establish eye contact with the congregation and proclaim the prayers in a bold voice. The Eucharistic Prayer was to be a proclamation to the laity and gestures, big gestures especially at the "take this all of you" for both bread and wine, were to be directed to the congregation as though they were literally at the Last Supper. But no elevations, simply show and no more than chest level. Incongruous to say the least!

Watch this pre-Vatican II celebration of the then Ordinary Form of the Mass in a very modern Benedictine Arch abbey chapel in Saint Louis in 1964.  One must keep in mind the the liturgical movement of the 20th century is what inspired Sacrosanctum Concilium and Pope Paul VI's Consilium that fabricated the new Mass. But experiments in architecture and Mass facing the congregation took place in the 1950's prior to Vatican II:

The Mass begins at about minute 18, with a marvelous commentary and explanation of the now called EF Mass by a Benedictine priest, however, the first 16 minutes gives a marvelously sober introduction to the new theology that would soon deform the Mass (in just a few months of the filming of this Mass in 1964) but the Mass isn't deformed yet. Please note the modern, spaceship look of the chapel in the round. The altar is in the center, but there is still an altar railing. But please note that even though the Mass is partially facing the congregation, it is clear that the prayers are directed toward God and not in any way proclaimed to the congregation. The silent canon or low voice canon beginning at minute 42:50 makes it clear that this sacred prayer is directed to God in hushed tones, not in a haughty voice as though it is directed to the people in the abbey church! And the celebrant says the Sanctus but the choir sings it as the celebrant continues with the canon (thus all kneel at the Sanctus). The grand silence of the Canon is marvelous when properly understood and creates a sense of the sacred and holy reverence so sorely missing in the proclaimed canon with its banalities in the Ordinary Form today!

Please note the Kiss of Peace at about minute 53 and how it is carried out--the priest to the deacon, the deacon to the subdeacon, the subdeacon to the other clergy in choir dress. If only this were maintained in the Ordinary Form's Solemn Sung Mass and exclusively for it and not lesser solemn forms of the OF Mass with the addition of the altar servers, quietly bring the Kiss of Peace to the Congregation (which happened in some places with the new Mass)!

Then please note how marvelous is the sea of humanity in an unregimented flow approach the altar railing at random beginning at minute 56. Listen to the Benedictine priest's marvelous commentary on the significance of coming to the altar railing and the actual Communion Procession which is that of the Our Lord carried by his servant the priest who processes to each communicant reverently kneeling awaiting the Lord to come to them! This is the best theology of the Holy Communion Procession which the modern OF Form has obfuscated, as destroyed!

Please note too, that although the priest is facing the congregation as he at any of the major basilicas in Rome, his personality is not at all evident--he decreases so that the Lord may increase!!!!!!!

It appears, thanks be to God, that the Saint Louis Benedictine Abby has maintained the Traditional Liturgy and altar railing in their spaceship! They have maintained the Sacred Liturgy too!

This is the abbey Church today!

Wow very pleased that the bishop of San Pablo Laguna had the guts to do the right thing. In a way I don't blame a lot of the priests who do this and the reason I don't is because their bishops DO NOT PUNISH THEM for these stupid acts. So when your bishop does nothing to correct these weird things at Holy Mass the priests think all is well and continue with liturgical abuse! As for the poster who took issue with the choreography of the seminarians I stated before how very sad that this poster had to knock the stunning and devout Holy Mass that was in the video. As I stated before now take a look at the seminary EMPTY AND CLOSED, if you hate the TLM that is most unfortunate and truly sad, hopefully one day you will come to love the TLM as we do, give it a try and give the Anglican-Catholic Mass a try you might just have a change of heart!!

Sadly, in the Novus Ordo, the Mass has become ALL about the priest, very egocentric, pathetic. One of the greatest aspects about the Extraordinary Form, is that the personality of the priest is irrelevant, the focus is on the Lord instead

I attended a daily Mass there, but I don't recall anything unusual about it. Their habits were different from other Benedictines.