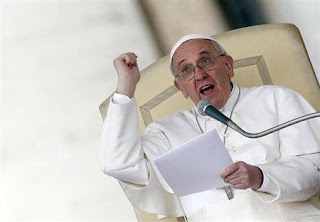 THEOLOGIANS: PIONEERS IN THE CHURCH'S DIALOGUE WITH CULTURES

Vatican City, 6 December 2013 (VIS) - “To hear, distinguish, and interpret the many voices of our age, and to judge them in the light of the divine word, so that revealed truth can always be more deeply penetrated, better understood, and set forth to greater advantage.” This is one of the tasks of the theologian, Pope Francis asserted today, quoting from the Pastoral Constitution “Gaudium et spes”, on receiving members of the International Theological Commission and its president, Archbishop Gerhard Muller, at the close of their plenary assembly.

“Theologians, therefore, are 'pioneers' in the Church's dialogue with cultures; a dialogue that is both critical and benevolent, which must encourage the welcome of the Word of God by a part of persons 'from every nation, race, people, and tongue'”, the Holy Father stated, continuing the issues that the Commission had dealt with in their assembly, with its theme of “The Relationship between Monotheism and Violence”.

“Your reflection,” he said, “bears witness that God's revelation truly constitutes Good News for all humanity. God is not a threat for humankind. Faith in the one and thrice holy God is not and can never be a source of violence or intolerance. On the contrary, its highly rational character confers a universal dimension upon it, capable of uniting persons of good will. On the other hand, the definitive Revelation of God in Jesus Christ by now renders every recourse to violence 'in the name of God', impossible. It is precisely by His refusal of violence, by His having conquered evil with good with the blood of His Cross, that Jesus has reconciled humans with God and with themselves.”

“It is this very concept of peace that has been the focus of your reflection on the Church's social doctrine, which has the goal of translating God's love for the human person, made manifest in Christ Jesus, into a concrete reality of societal life. … The Church is held to living first of all within herself that social message that it bears to the world. Fraternal relations between believers, authority as service, sharing with the poor: all of these traits, which have characterized ecclesial life from its origin, can and must constitute a living and attractive model for the diverse human communities, from the family to civil society.”

“This witness,” the Bishop of Rome emphasized, “pertain to the People of God, a People of prophets, in its entirety. By the gift of the Holy Spirit, the members of the Church possess a 'sense of faith'. This is a kind of 'spiritual instinct' that makes us 'sentire cum Ecclesia' [think with the mind of the Church] and to discern that which is in conformity with the apostolic faith and is in the spirit of the Gospel. Of course, the 'sensus fidelium' [sense of the faithful] cannot be confused with the sociological reality of a majority opinion. It is, therefore, important—and one of your tasks—to develop criteria that allow the authentic expressions of the 'sensus fidelium' to be discerned. … This attention is of greatest importance for theologians. Pope Benedict XVI often pointed out that the theologian must remain attentive to the faith lived by the humble and the small, to whom it pleased the Father to reveal that which He had hidden from the learned and the wise.”

“Your mission, therefore, is both fascinating and risky. It is fascinating because research in and teaching of theology can become a true path to holiness, as attested by many Fathers and Doctors of the Church. But it is also risky because it bears temptations with it: hardness of heart, pride, even ambition,” the Pope observed, recalling a letter from St. Francis of Assisi to St. Anthony of Padua regarding this danger. It warns: “I am glad that you are teaching the brothers sacred Theology provided that, in the study, you do not extinguish the spirit of holy prayer and devotion.”

At the conclusion of the audience the Holy Father entrusted the theologians to the Immaculate Virgin so that they might “grow in this spirit of prayer and devotion and thus, with a profound sense of humility, be true servants of the Church”.

Father, you and the Holy Father used "theologian" and "humility" in the same sentence...oxymoron par excellence!

Who cares what he says anymore? He clearly knows nothing about economics yet thinks he can tell the world how entire financial systems should be run. He clearly doesn't' understand Catholic theology at all. He needs to learn that the entire world isn't Argentina and Evita has long since bit the dust.

I will answer your question, Anonymous. I care, and so should anyone who claims to be Catholic.

And now I have some questions for you. First, what is it precisely that Pope Francis “clearly” does not understand about economics?

Second, how do Pope Francis’s views on economics differ from those of Pope Benedict in his encyclical “Caritas in Veritate”?:

Third, if their views do not differ significantly, does Benedict get a pass from you, because, you know, he is Benedict, or is he also just as dumb as Francis in your opinion?

Oh, and by the way, perhaps you can also enlighten us regarding precisely what the Pope does not understand about Catholic theology.

Philosopher: A blind man looking for a black cat at midnight.

Theologian: A blind man looking for a black cat at midnight who finds it.

There is indeed much presumption in theology, but it is a struggle we have to pursue. If viewed properly, it should be the most humbling pursuit.

Anon, I often agree with you and share your concerns. You do bring it a bit strong sometimes. I would like for you to address Anon 2's questions. Personally, I think Pope Francis understands Catholic theology just fine…it is his interpretation of it that sometimes frightens me.

I agree that he does not need to be playing economist.

Really that is how you refute a position. Go back and study Plato and learn how to put together a reasoned response, your refutation makes no logical sense. Make a Venn Diagram and you will see. Reason isn't based on feelings or emotion my friend but by educated thought.

Anonymous: “Reason isn't based on feelings or emotion my friend but by educated thought.”

This is a fine sentiment, although one must also recognize the appropriate place of feelings and emotions, as of course did Plato.

Putting that particular quibble aside, however, we now look forward to some educated thought as you respond to my questions.

The Holy Father can speak to economic issues as it concerns the human condition.
If he were to come out with explicit instructions on how monetary policy should be implemented, then one could more properly call into question his lack of formal education and training in that area.
One need not have a law degree, say, to speak in support of the right to legal counsel for the poor.

So it is likewise when he speaks about abortion, embryonic stem cell research and other issues where there is a moral dimension attached.

Note that the Holy Father in Evangelium Gaudium said this also:


" This Exhortation is not a social document, and for reflection
on those different themes we have a most suitable tool in the
Compendium of the Social Doctrine of
the Church, whose use and study I heartily recomend.
Furthermore, neither the Pope nor the Church have a monopoly on the interpretation of social realities or the proposal of solutions to
contemporary problems. Here I can repeat the insightful observation of Pope Paul VI: “In the
face of such widely varying situations, it is difficult
for us to utter a unified message and to put forward a solution which has universal validity.
This is not our ambition, nor is it our mission.
It is up to the Christian communities to analyze
with objectivity the situation which is proper to their own country”.

By the way, Anonymous, before you dismiss George’s point so cavalierly, can you please also explain to us why sexual behavior should be on the table for purposes of magisterial moral evaluation but economic behavior shouldn’t? I hope you have not fallen victim to the pernicious modernist fallacy that the dismal science is somehow amoral.

Sorry, George, I only saw your comment after I had submitted mine. Quite right!