POPE FRANCIS' SELECTION OF NEW BISHOPS FOR THE USA KEEPS HITTING THE BALL OUT OF THE PARK--GOOD, PASTORAL AND ORTHODOX MEN! 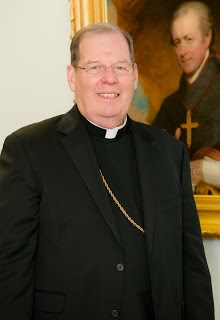 Are these words a not-so-veiled description of what each bishop, priest, nun, monk, sister, brother, deacon and lay person should exude?

(Vatican Radio) At his weekly General Audience, Pope Francis turned his attention to the Feast of the Nativity. “This our encounter,” he said, “is taking place in the spiritual climate of Advent, made even more intense by the Novena of the Holy Nativity that we are living in these days, and that leads us to the Christmas holidays.” The Holy Father reflected on the Nativity of Jesus, “the feast of confidence and hope, that overcomes uncertainty and pessimism.” The reason for our hope, he said, is this: “God is with us, and God still trusts us.”

My Comments:  "The feast of confidence and hope, that overcomes uncertainty and pessimism.”  This describes what all Catholics should be including of course our bishops. Thus the Holy Father is sweeping clean from his inner-circle those who join the culture wars as shrill warriors out for blood rather than pastors exuding confidence and hope that overcome uncertainity and pessimism.

And aren't there a goodly number of "orthodox neo-conservatives, what I call neo-Protestants" complaining about this pope and doing so with a great deal of shrill uncertainty and pessimism about not only the person of the Holy Father to whom every Catholic must submit in humble obedience to the pope's authority in faith, morals and canon law?  And what it the cause of their uncertainty?

Let me count the ideologies:

1. The media loves this pope, so he must be bad (whereas the media is using this pope and spinning him for their own purposes which is going to backfire as more and more of the world learn of the pope, his orthodox teachings, his call to repentance and confession and submission of the mind and will to almighty God).

2. The post-Catholic ideological left fringe of the Church like this pope as they spin his words their way (where else would you see rejoicing that Cardinal Burke, a conservative, is replaced by another conservative and the Congregation for Bishops is headed by a very conservative papal candidate? Could it be they are trying to rattle the sensibilities of rank and file orthodox Catholics who nonetheless love this pope pastoral outreach and theology?)

3. They think this pope is pro-abortion, euthanasia, artificial contraception and gay marriage and gay sex (and yet he constantly upholds the teachings of the Church and decries a "throw away society" that rejects the innocent young and the elderly and he holds up for praise and example the French Bishop's valiant fight against the redefining of Marriage and how they rallied the faithful in this cause.)

4. And many think Pope Francis will promote priests who are heterodox and care little about the Catholic Faith and morals of the Church, what is called the Deposit of Faith and fidelity to the Magisterium (yet Pope Francis has warned time and time again about the influence and temptation of the devil, the need for obedience to the pope and bishops of the Church, the Magisterium and fidelity to the Deposit of Faith and all the bishops he has thus far named are excellent candidates!

1. the new Archbishop of Hartford who is heading up the renewal of the LCWR in line with what Pope Francis desires for religious men and women in terms of fidelity to the Magisterium and the Deposit of Faith as they serve the poor

2. The new Bishop of Fort Worth, an academic with canon law credentials and completely orthodox and pastoral

3. The new Bishop of Marquette named yesterday who has suburb Roman credentials, is very orthodox and pastoral at the same time

4. and now the new Bishop of Portland, Maine, named to day who is equally orthodox, disciplined, a hardliner on priests who abuse and a pastoral bishop.

This is what Whispers in the Loggia has to say about the new Portland bishop and other things:

In the fourth US appointment of the last six days, at Roman Noon this Wednesday the Pope named Bishop Robert Deeley, 67 – ordained an auxiliary of Boston less than a year ago – as the 12th bishop of Portland, overseeing Maine's 200,000-member statewide diocese.

The principal aide to Francis' chief North American counselor – Deeley spent the decade prior to his 2011 return home as the top deputy on the CDF team which executed Cardinal Ratzinger, then Pope Benedict's sweeping purge of priests credibly accused of sex-abuse, a push which procured the dismissals of over 3,000 offenders from the clerical state across the global church.

Indeed, such was the Maine pick's critical role in the project that Deeley's elevation as bishop by Benedict in November 2012 came virtually in tandem with that of his boss on the abuse team, the Maltese lion Charles Scicluna, who was sent home to be an auxiliary on the island after 11 years as the Vatican "district attorney" tasked with leading the clean-out. It's only in retrospect, however, that the significance of the twin moves can fully be grasped: having clearly determined his will to resign by that point, Papa Ratzinger moved to shield both men in case his successor were given to revenge for the banishment of abusers, providing both Scicluna and Deeley the "protection" of the episcopacy yet placing them in sufficiently inconspicuous roles to ride out a hypothetical storm. (Outlandish as that might sound to some, remember well that the cardinal-electors were only placed under the pre-Conclave media "blackout" once the US delegation started speaking openly about the importance of the next Pope's keeping a zero-tolerance line on the cases.)

Seen as a formidable character on all sides with a pastoral sense that's noticeably deepened over recent years, the Maine pick – his brother Kevin also a Boston priest – comes into a charge that's been especially hard-hit by the Northeastern church's titanic challenges of these times: a painful drip of abuse revelations followed by traumatic waves of parish closings, and then, last year, the legalization of same-sex marriage (one of the nation's first three instances where redefinition took place at the ballot box).

As one friend wedded to the situation summed it up, "It's a dying church...." Ergo, the question becomes "What's the turnaround?" Or is there one? Today's choice described as more comfortable being the frontman than a deputy, it apparently won't be long before we find out.

I want to make sure I'm reading you right, Father.

Did you just call Wuerl "conservative?"

A New Bishop for Portland! Thank God, Bishop Malone can finally stay home in Buffalo to focus on the good work he is doing. WE need him here - priest have complained to me that he is gone and they have no one to look to. Unlike his predecessor, when he is here, Malone listens and expounds a sound and sensible catechesis.

Cardinal Burke is a soft-spoken man--he is not "shrill." Father Pfleger IS shrill . . .

"Thus the Holy Father is sweeping clean from his inner-circle those who join the culture wars as shrill warriors out for blood..."

What a mean spirited thing to say about good men like Cardinal Burke who are merely preaching the Church's moral teaching, in season and out. I guess we're supposed to give up on the culture war and surrender to the moral cesspool of modern culture without a fight?

'Did you just call Wuerl "conservative"'?

Where, Jon, would you get such a looney idea?

I have been trying to shift from using the terms conservative and liberal (but not always consistently unfortunately) as these terms are too political and not proper for religious attitudes and practices. I think heterodox and orthodox are better terms. Thus I would say that both Cardinals Wuerl and Burke are orthodox, but their pastoral practices or approached widely differ which is allowed in pastoral theology and that Wuerl's approach as a reconciler is more in line with Pope Francis pastoral theology compared to Cardinal Burke's more punitive approach, both approaches though are orthodox.

Whenever I think of Cardinal Burke, I usually think of his more traditionalist approach to liturgy rather than to whom he may have refused Communion.

Because of Burke's prominence in the Church, to many of us who favor his approach to liturgy, any move unfavorable to Burke could be read as a threat to the promotion of EF and/or the OF celebrated in an EF way.