HAVEN'T I BEEN SAYING THIS ALL ALONG? PRIESTHOOD IS FOR MEN, BECAUSE THE PRIEST IS THE IMAGE OF THE BRIDEGROOM, JESUS CHRIST, A MAN! AND LAITY'S PRIMARY "MINISTRY" IS IN THE WORLD, NOT CHURCHY SORTS OF THINGS!

Pope Francis' emphatic no to this: 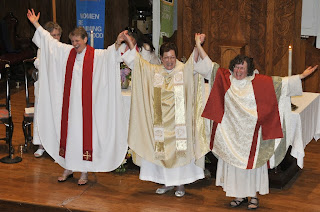 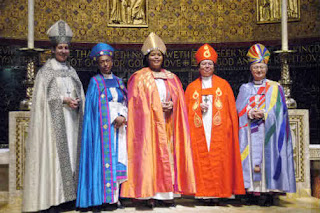 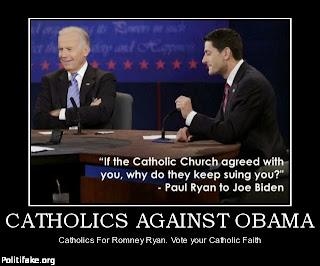 Pope Francis wants Catholics to evangelize with the Catholic Faith in the transformation of society in the social, political and economic sectors, something which many Catholics in these areas fail to understand!

Those on the left of things (the wrong side, the sinister side) say that women can be ordained priests in order to have power in the Church. I've been saying that it is not possible because the pope and bishops have no authority to change what is a part of the "Deposit of Faith" or the nature of men and women, wives and husbands, male and female. The priest as Pope Francis knows very well: From the pen of Pope Francis: "The reservation of the priesthood to males, as a sign of Christ the Spouse who gives himself in the Eucharist..."

The second paragraph below highlights the Pope's understanding of priesthood and Church. It is powerful.

The first paragraph below highlights what I've been saying all along. The proper "baptismal role" of the laity is "in a greater penetration of Christian values in the social, political and economic sectors. It often remains tied to tasks within the Church, without a real commitment to applying the Gospel to the transformation of society."

Lay people are, put simply, the vast majority of the people of God. The minority – ordained ministers – are at their service. There has been a growing awareness of the identity and mission of the laity in the Church. We can count on many lay persons, although still not nearly enough, who have a deeply-rooted sense of community and great fidelity to the tasks of charity, catechesis and the celebration of the faith. At the same time, a clear awareness of this responsibility of the laity, grounded in their baptism and confirmation, does not appear in the same way in all places. In some cases, it is because lay persons have not been given the formation needed to take on important responsibilities. In others, it is because in their particular Churches room has not been made for them to speak and to act, due to an excessive clericalism which keeps them away from decision-making. Even if many are now involved in the lay ministries, this involvement is not reflected in a greater penetration of Christian values in the social, political and economic sectors. It often remains tied to tasks within the Church, without a real commitment to applying the Gospel to the transformation of society. The formation of the laity and the evangelization of professional and intellectual life represent a significant pastoral challenge.

The reservation of the priesthood to males, as a sign of Christ the Spouse who gives himself in the Eucharist, is not a question open to discussion, but it can prove especially divisive if sacramental power is too closely identified with power in general. It must be remembered that when we speak of sacramental power “we are in the realm of function, not that of dignity or holiness”.[73] The ministerial priesthood is one means employed by Jesus for the service of his people, yet our great dignity derives from baptism, which is accessible to all. The configuration of the priest to Christ the head – namely, as the principal source of grace – does not imply an exaltation which would set him above others. In the Church, functions “do not favour the superiority of some vis-à-vis the others”.[74] Indeed, a woman, Mary, is more important than the bishops. Even when the function of ministerial priesthood is considered “hierarchical”, it must be remembered that “it is totally ordered to the holiness of Christ’s members”.[75] Its key and axis is not power understood as domination, but the power to administer the sacrament of the Eucharist; this is the origin of its authority, which is always a service to God’s people. This presents a great challenge for pastors and theologians, who are in a position to recognize more fully what this entails with regard to the possible role of women in decision-making in different areas of the Church’s life.
Posted by Fr. Allan J. McDonald at Wednesday, December 04, 2013

Today, December 4th is the feast day not only of of St. John Damascene, but also
St Osmund

It was he who gave the Church the the “Sarum Use”. Although it was intended primarily for his own diocese, the "Ordinal of Osmund", regulating the Divine Office, Mass, and Calendar, was used, within a hundred years, almost everywhere throughout England, Wales, and Ireland.
Just like Gregorian Chant replaced previous liturgical musical forms, it superseded (deposed?) previous uses. I have to say that I'm not aware of how much it is still used today though. From some things I've read,it sounds like it making somewhat of a comeback.


He was Canonized by Pope Callistus III.

Callistus or Callixtus?
Pius I