THE AUGUSTA, GEORGIA V.A. GRINCH WHO STOLE CHRISTMAS AND THE ALLELUIA COMMUNITY WHO WANTS IT BACK! 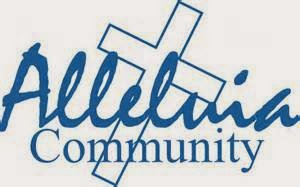 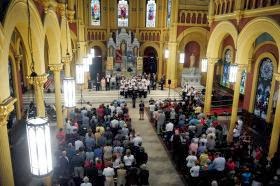 The Alleluia Community, an ecumenical (but primarily Catholic) charismatic community in Augusta, has made national news for having been told by the administrator of the uptown division of the Veterans' Administration Hospital that their elementary school children from their school were not allowed to sing religious Christmas music in the public places of the hospital; they could only sing secular "holiday" songs.

Well, of course, the Alleluia Community wasn't going to take this lying down. They've made righteous noise about this and the country has taken notice.

The Catholics of this community have a presence in each of the four parishes in Augusta and have provided more priestly vocations in the last 20 years than any single parish throughout the diocese (and they are a lay-covenant community). In a sense, this community, and they live in community in two separate neighborhoods in Augusta, one larger and the other smaller (a disclaimer the larger of the two called "Faith Village" is in the same neighborhood I grew up in, in South Augusta and where my brother and I delivered newspapers in the afternoon in the early 1960's, long before this community was born. Back then, the neighborhood was mostly comprised of GI's and their families preparing for Vietnam and yes, not a few of our customers or their children were killed in that war), is very similar to what would have been called Catholic Ghetto parishes of the northeast and Midwest. They are a 1950's sort of community and know each other exceedingly well and live like communities and parishes once live in the glory days of yore.

Another interesting fact concerning the vocations to the priesthood is that although the spirituality of the community is charismatic and thus this has a sort of liberating aspect on the style of music and Mass they are willing to experience with "pentecostal" fervor, the men ordained are rather conservative and traditional in their liturgical sensibilities and often have a great appreciation for the EF Mass.

But I digress. Today's Augusta Chronicle (December 31, 2013) reports the following:

In a letter mailed to administrator Bob Hamilton, the Alliance Defending Freedom stated that the facility’s decision to exclude religious music likely violates the Free Speech Clause of the First Amendment.
The 20-year-old national nonprofit organization cited numerous decisions from the U.S. Supreme and Appeals courts in its defense, and gave the medical center until Jan. 10 to respond to its request.
Jeremy Tedesco, the senior legal counsel leading the alliance’s case, said if no action is taken, a possible lawsuit could be in the works.

“Our nation’s veterans have time and again faced and defeated dangerous threats to the liberties we cherish as American citizens – children singing Christmas carols is not among them,” Jeremy Tedesco said. “By banning these Christmas carols, the VA is trampling the very religious freedoms our veterans have sacrificed so much to defend. Contrary to what hospital officials are claiming, they are disrespecting – not respecting – constitutionally protected religious freedoms.”

Augusta’s downtown VA Medical Center told high school students from the city’s Alleluia Community School last week that they must choose different music if they want to perform in the public areas in light of a 5-year-old policy they were more strictly enforcing.

Despite facing no resistance at the hospital in 2011 and 2012, the students were given a pre-approved list of 12 non-religious Christmas songs that the hospital’s Pastoral Service “deemed appropriate for celebration within the hearing range of all veterans.”

They were told nonsecular songs could be sung in the hospital’s chapel.

Tedesco said the VA’s policy appears to be nothing more than “political correctness run amok.”
“The Constitution clearly prohibits the VA from targeting religious Christmas carols for exclusion from a public facility,” said Matt Sharp, Tedesco’s co-counsel on the case. “We hope our letter will help clear up the misinformation upon which the VA is acting and that it will lift its unnecessary and unconstitutional ban.”

The alliance issued its letter Monday from its Georgia office and expects the Augusta VA to receive it Tuesday. Pete Scovill, a spokesman for the Augusta VA, declined comment until receipt of the letter, which he said the hospital has yet to receive.

In its defense, VA administration cited last week a 2008 rule in the Veterans Health Administration Handbook, stating that its leadership “may restrict or prohibit any practice that it deems detrimental to the health or safety of patients.”

…not to overlook the theological dangers of charismatic thinking...

I recall similar Catholic charismatics from many years ago. They were the ones with the guitars and folk music sitting where the deacons used to sit. Liked the music, just not there.

The interpretation of that passage was done by some bureaucrat who didn't want to be bothered with the group or was looking for a way to press his personal agenda. Lame.