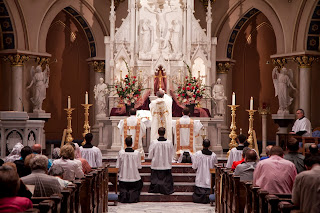 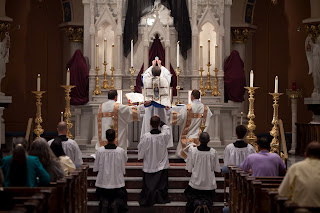 Yesterday, December 5th was the 50th Anniversary of Sacrosanctum Concilium. Nothing, as far as I can tell, was mentioned about it by the Pope or the Vatican.

When I was in Rome two major scholars of the liturgy stated that this document was a rush job to get it to the press of the time. 2000 bishops of the world had met for almost a year and none of the various committees charged with coming up with actual documents for the bishops to vote upon had completed their work. None were anywhere near completing their work including the Liturgy portion of Vatican II.

But pressure was placed upon the liturgy group to get the document out, voted upon and to the press so that it would look like the 2000 bishops had accomplished something that first year. So Sacrosanctum Concilium was rushed through, voted upon and the first document of Vatican II to be released. If you read it compared to the other documents of Vatican II you can tell it was a rushed job and in some places ambiguous and sloppy. We have had to live with this for the past 50 years, but only now are scholars realizing what a rushed job it was, not to mention the group appointed by Pope Paul VI who rushed their reforms out as quickly and sloppily as possible. Thus in the last 50 years we have seen the disintegration of the Liturgy, not so much in terms of the actual books (poor vernacular translations not included, but these were rushed also based upon a faulty directive on how to translate from the Latin to the Vernacular).

People born after 1959 often think of Vatican II as some sort of historic event back there with Adam and Eve. They don't have the same idol worship of it as people who remember the Council, the so-called excitement (run away hormones) that so many had and the awful experimentation and deconstruction of the liturgy, the Church and her doctrinal and moral teachings by those on a "manic-high" during this period. In fact, many people born after 1959 are ambivalent about the Church because of the silliness and mania born in the immediate aftermath of Vatican II.

The Church which had been a rock for the promotion of salvation in Jesus Christ soon became a marshmallow that bounced not a few right out of the doors of the Church, many running from the mania and iconoclasm of the period to other things for their salvation, like a gross individualism and being independently "spiritual" in their own way.

Nonetheless, though sloppily written and hastily developed, Sacrosanctum Concilium remains a document of the highest Magisterium of the Church so it cannot be disregarded. But it can be reinterpreted in light of what is known about how it came together and the disastrous implementation of its somewhat conservative agenda although radical in other ways.

The papist I am tells me to look at how the Pope celebrates the Mass and the Liturgy of the Hours in the Vatican for the proper implementation of Vatican II moving forward:

1. The priest and congregation should celebrate as seriously as the Holy Father does, keeping his personality out of it and being somber and soft in following the rubrics.

2. Pope Francis normally, but not always, celebrates his parts in the vernacular (Italian) but the Kyrie, Gloria, Credo, Sanctus, Pater Noster and Agnus Dei are in Latin. I think this is a marvelous way to preserve our Latin heritage but we all know that it is permissible to celebrate the entire Mass in Latin if one chose to do so.

3. Chant the propers of the Mass, while not excluding an additional Entrance Chant and Communion antiphons or motets. This is the way it is done in Rome.

4. Decorate the altar in the pre-Vatican II way or celebrate it ad orientem. Pope Francis has done ad orientem and maintained the altar style of Pope Benedict.

If we modeled the way Pope Francis celebrates Mass and pay stricter attention to singing the Mass rather than singing songs at Mass, I think we would begin to see a great improvement in the Liturgy with solemnity and reverence in the pre-Vatican II sense of the word returning to our people when they come to Mass.

Finally, a hope for the future of the Mass comes from the Anglican Ordinariate. The options of the Prayers at the Foot of the Altar, the traditional offertory Prayers, the EF rubrics for the Roman Canon and the Last Gospel after the dismissal will show the great continuity between the post-Vatican II Mass (Ordinary Form) and the Mass from which it developed, the pre-Vatican II Mass now called the Extraordinary Form. There will be an authentic organic development rather than a breach to something altogether different.
Posted by Fr. Allan J. McDonald at Friday, December 06, 2013

Trick question! They're both photos of the Novus Ordo, since in both the thurifer is at the center of the altar, rather than at the epistle side as he would be in the TLM.

Yes, there was a notable absence of commemoration, perhaps because so few liturgical players ever read it. We still have private baptisms and weddings, we still don't have sung Vespers in churches, nobody knows how to sing the Our Father in Latin, priests pray the Office in the vernacular, old church furnishing were not preserved, there has not been respect shown to the traditional rites of the Church, etc., all contrary to the 'letter' of S.C.

Picture 1 is OF, picture 2 is EF. The altar cards and the chasuble give photo #2 away. Happy feast of St. Nicholas, Father.

""The Church which had been a rock for the promotion of salvation in Jesus Christ soon became a marshmallow that bounced not a few right out of the doors of the Church, many running from the mania and iconoclasm of the period to other things for their salvation, like a gross individualism and being independently "spiritual" in their own way. ""

"I"ll add this bit to my "quotes library as it is both flavorful and accurate is a terrible sort of way..."

You may be adding me to that number. Having once discovered how the Church was formerly, I am finding it increasingly impossible to live and worship in the present church. I help out at the local parish by cooking and serving a monthly dinner to the homeless. We had ours last night. The pastor when he saw the meal on the serving tables repeatedly said. "Oh my G__, Oh my G___" Now, how hard is it for a priest NOT to commit a venial sin in public?

Though papal liturgy may again not look quiet like this for a while now. But we can at least hold it in our memory.

The EF is the 1962 Missal. So if Picture 2 is supposed to be EF the subdeacon should be kneeling in plano presbyterii, directly behind the celebrant, holding the paten in a humeral veil. He does this from the Offertory to the Pater Noster (except in Requiem Masses). In OF Masses celebrated ad orientem it is usual for the incensation to be from the side, as in the OF, but there is no hard-and-fast rule on this.

It occurs to me that, whereas most EF vs OF discussions concentrate on the textual differences, it's arguable equally if not more crucial (to worship and inspiration of sanctity) are the ritual and ceremonial differences. And that, even if the text of the EF is followed assiduously, it's not really the venerable Mass that has inspired the faith and worship of so many saints and generation unless the traditional ceremony and ritual is followed just as assiduously.

John: Regarding the incensation of the elevated host and chalice, the Ritus servandus (rite to be observed) in celebratione Missae (under pain of mortal sin?) printed in the front of the Missale Romanum 1962 says:

Henry, In my last sentence I meant to say "as in the EF", where there is, as you point out, a hard-and-fast rule. I find it interesting that when the OF is celebrated ad orientem things like the position of the sedilia and the rules for incensation tend to follow the traditional pattern.