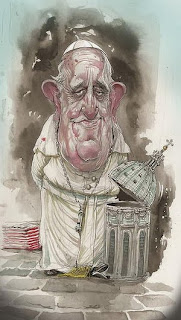 MY COMMENTS FIRST: There are those in la la land who aren't buying the orthodoxy of Pope Francis. They confuse his compassionate love for people which calls us not to judge or deride anyone with throwing out Catholic dogma and doctrine. They think finding new models to govern the Church, such as more subsidiarity and consultation and the Curia actually serving dioceses throughout the world rather than controlling them, ultra liberal. They have a security in some of the things they embrace, which many traditional Catholics, such as myself, embrace also, but their security is a false sense of security about to be ripped out from under them.  But they don't get it or buy it! and want to prevent any discussion that questions their euphoria even when the most obvious of his words are pointed out to them. Denial isn't just a river in Egypt!

Here is an article by the secular press, from Australia's "Sidney Morning Herald." He is of course lamenting the obvious which I have already pointed out repeatedly, not as a lament but as good news:

Pope Francis may be awesome, but there's the iffy bit


And so another rock star is born. Welcome Francis - that's Pope Francis.

Just as the Norwegian Nobel Committee rushed to sanctify Barack Obama by awarding him the 2009 peace prize, even before he'd done unpacking at the White House, there's a rush by the world's news media to canonise Pope Francis, even before he's warmed the papal throne at the Vatican.

As a new world figure Francis is a sensation, to be sure. One of the more endearing welcomes came from MSNBC's cool and bespectacled young commentator Chris Hayes: ''Given the constraints of what being Pope is, you can operate in one of two ways: you can be a jerk about it, or you can be awesome - and this guy is choosing to be awesome.''

The Huffington Post is in raptures: ''We love him.'' At Gawker, Francis is ''our cool new Pope'' and Time magazine has named him its 2013 Person of the Year. Out with Benedict, the theology professor; in with Francis, the former janitor, nightclub bouncer, chemical technician and literature teacher.

These days we just can't help ourselves. The insatiable appetite of a 24/7 news machine means we must constantly feed the beast, so we race ahead of the news and, in this case, serve notice that the hapless Francis must live up to our expectations as reformer extraordinaire.

As an institution, the church is in a bad way. Think child sex abuse on an industrial scale and money laundering, graft and homosexual blackmail at the Vatican. And will we ever forget the Bishop of Bling and the bathtub that cost $20,000 in the $42 million renovation of his palace at Lindberg, Germany?

Against that backdrop, Francis is cracking the whip. He denounces church leaders as narcissists whose Vatican-centric outlook neglects the real world. His symbolic gestures make the 76-year-old made for TV. Out with the fancy red leather pumps and in with sensible black brogues. He switched the papal Mercedes Benz for a Ford Focus. And he lives in a two-room apartment instead of the grand Apostolic Palace.

He actually kissed 53-year-old Vinicio Riva, hideously disfigured by neurofibromatosis. When it came to re-enacting Jesus' washing of the apostles' feet, he did a thorough job on the feet of 12 prison inmates, two of them Muslims, some of them women, instead of the cursory wipe dealt to a bunch of priestly ring-ins by Benedict and others.

But here is the iffy bit. He talks of not judging gays and for greater inclusion of women, and he has been critical of the hierarchy's obsession with contraception, same-sex marriages and abortion. But this man is on the record denouncing efforts to redefine marriage as the work of Satan, he has explicitly said ''no'' to women priests and said abortion is ''not something subject to alleged reform''.

With all the hullabaloo of the church being on the threshold of an era of reform, Francis may have been expected to release US nuns from a modern inquisition imposed by Benedict, in which the nuns have virtually been branded heretics because, the rap sheet says, they have betrayed the doctrine on the role of women, homosexuality and even Obamacare, as a hand-up for the poor. More humiliatingly, the bishops who handled the abuse scandals so appallingly have been charged with supervising the nuns.

The abuse crisis is the elephant in the room and Francis has barely mentioned it. Further, since his elevation, the Vatican has refused to comply with a request by the UN Committee on the Rights of the Child for records on its own abuse investigations.

But … in the lead up to a synod of bishops next year, Francis has asked all bishops to circulate a questionnaire to parishioners on divorce, birth control, unmarried couples and gay marriage.
That prompted this tart warning from former Irish president Mary McAleese: ''Please, let us not have a bunch of men who have deliberately chosen not to have families tell us, as members of families, how we're going to live our family life. Please, let us have a broad-ranging discussion in which people who have real experience of family lead the reflection.

''If it's going to be solely bishops talking at the synod in the way that they have talked in the past, they may as well not bother going to Rome.''

Awesome? Francis may be all that and more. But if we are to separate substance from style and acknowledge the calcified conduct of bishops and cardinals in saying what goes in the lives of Catholics, we cannot be certain Francis will make it from A to B - or even make out what the contours of his B version of Catholic dogma and diktat will be.

As they say, Rome wasn't built in a day.

None of this is about Francis, it's all about Pope Benedict. The media obsession isn't about showing how Francis is so kind, because so was JP II and Benedict. The media's hatred for Benedict is driving all this silly portrayal of Bergoglio as the reincarnation of St. Francis. The media is still trying to paint Benedict as evil and is contrasting him with Francis daily to prove this. And what exactly is the point of this article besides ridiculing those Catholics who actually believe everything the Church has always taught and love Tradition/tradition. I have never met a priest more humble than Pope Benedict. He also kissed and embraced the poor, the forgotten, and yes the disfigured. The difference between him and Francis is that the media never covered Benedict's acts of kindness and humility.

Amen! You hit the nail on the head, and Catholics on the left do the same thing and it is all about getting even with Pope Benedict.

Benedict was my ideal Pope…well, except for maybe Pius X.

What a pathetic piece of journalism. Par for the course in Oz, unfortunately.

Face it, the secular media and even liberal Catholic media ie NCReporter and its ilk, have ceased to be objective journalists and furthermore have no understanding of the spiritual realm regarding Christianity, let alone Catholicism. Since the vast majority of the world,including many if not most ignorant Catholics, thinks papal infallibility means the pope can do essentially whatever he wants since he is infallible in everything, they believe he can "correct" the "evils" of the Catholic Church, such as the sin of homosexuality and gay "marriage", male only clergy, with the stroke of a pen. If todays journalistic world were serious about doing real professional journalism, instead of selling muckraking, every editor in the nation would send its so called religion writers back to school and take some courses to actually understand what Christianity, and in particular the Catholic faith teach and practice instead of assuming they know everything about Catholicism because hey watched Exorcist, Godfather III, and Name of the Rose!

OH and yes! Vive Papa Emeritus Benedict!! I agree without ever meeting him, that Benedict, just by his visual manners, demeanor and words, and writings to be a true humble, holy servant of God. Anyone who dares to call this good man anything less than a humble shepherd simply has no concept of the sacred.

This guy sounds like he was left out of some editorial meeting.

I hear you Gene, but B-XVI needed a ruthless executive officer. Had I only known the job was open...

To those in the secular world of influence and promotion of celebrity-status, personality is the sine qua non,the raison d'etre (if I may mix my latin and french) of existence. Benedict had very little of what they considered valuable and to compound matters there was (to some of them) his association with Nazism.
Pope Francis has managed to charm and disarm the media (no small feat given the power they yield)-at least for now. Maybe his approach will gain some good results in the end. Let's maintain hope and pray for him and the Church. These are definitely spiritually challenging times.

Here's an encouraging thought for Christmas...for anybody who may look at all of the once or twice a year communicants and have bad feelings about them. A quote from our Holy Father in Evangeli Gaudium: "The Eucharist is not a prize for the perfect, but a powerful medicine and nourishment for the weak." He's talking about me. Is he talking about you?

Why do we worry about the credibility and authority of the Church based on the hypocrisy of only some of our clergy yet demand they all be hypocritical in the custody of the Body of Christ?