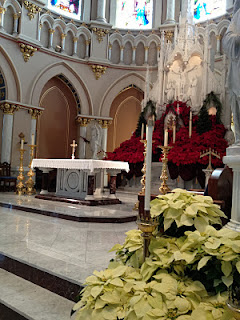 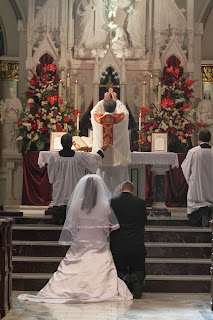 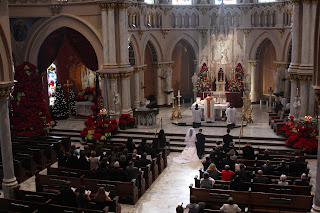 We put all our energy and resources into our two Christmas Vigil Masses and our Midnight Mass. The two we have in the morning of Christmas Day, the Mass at Dawn and the Mass during the Day are simple, with only organist and cantor, no incense. The night ones have the full array of "high church" features.

Our 4:30 PM Mass is the most crowded, standing room only and into the small vestibule we have, and it is also the most Catholic, meaning we don't have as many Protestant visitors that we have at the Midnight Mass, where Protestants for generations in the south have a tradition of attending Midnight Mass in Catholic Churches; odd but true. (Today most Protestant Churches have Christmas Eve services, but this is a relatively recent phenomenon and is curtailing our Protestants coming to us! What's up with that?)

But in terms of liturgical resources, we put most of that into the Midnight Mass. There is a 45 minute Carol Prelude to the Midnight Mass sung by both the choir and congregation. We have a larger than usual choir for the Midnight Mass which practices for it for weeks prior. We have the most "bling" at this Mass too, with hoards of altar servers with torches, lots of incense and the chanting of the Kyrie in the pre-Vatican II way in Greek and the Gloria in Latin (all else in English). And we celebrate the Midnight Mass ad orientem. But about a little less than half are Protestants or non practicing Catholics!

I think I do not like being consulted by the Priest regarding how Mass should be conducted...

Fr. McDonald,
My Christmas morning Mass (I only schedule one now) has the feeling of an afterthought. To be honest, I'm usually exhausted and just want to get through it. I once offered a total of seven Christmas Masses, and afterward decided to put my foot down about that for the future.
I now sing the 4pm, say the 6pm, sing the E.F. at midnight, and then say the 9am. I've identified the 4pm as our "principal" O.F. Mass, and so I sing all the Ordinary parts except the canon. The other two O.F. Masses have music, but I don't sing any Ordinary parts, such as the dialogues or orations.
In my opinion, each priest should offer only three Christmas Masses, and each parish should have only one fully sung O.F. Mass. The midnight Mass, given its traditional nature, should be E.F. sung or even solemn.

We always avoid vigil and midnight masses like the plague (lesson learned the hard way!) even when our children were small--too much chaos and too little reverence. We and kids always preferred the mid-morning Christmas Mass.

Here is what our parish does (N.B. it has more help than you do with a pastor, a vicar, and an in-residence):

--Midnight Mass (OF). Repeat of music from the 5PM. The liturgical works.

--11AM: OF Mass during the day (Divine Word). Cantor and choir, but no prelude.

I deleted the next 4 by accident. These are posted under my name:

We always avoid vigil and midnight masses like the plague (lesson learned the hard way!) even when our children were small--too much chaos and too little reverence. We and kids always preferred the mid-morning Christmas Mass.

Ryan Ellis has left a new comment on your post "WHAT TO DO? WHAT TO DO? OH, WHAT TO DO ABOUT CHRIS...":

Here is what our parish does (N.B. it has more help than you do with a pastor, a vicar, and an in-residence):

--Midnight Mass (OF). Repeat of music from the 5PM. The liturgical works.

--11AM: OF Mass during the day (Divine Word). Cantor and choir, but no prelude.

PI, I think you are doing yourself, and your parish, a disservice by avoiding the Traditionalists. In my experience many Progressives have quite emotionally put forth that they are the True Church as forcefully as any misguided Trad. I think we have to accept that both are right and it is good for the Church if both are nourished to see each other that way.

The balance the Priest must strike is to keep the Trads from worshiping the form and the Progressives from losing reverence.

Veritas has left a new comment on your post "WHAT TO DO? WHAT TO DO? OH, WHAT TO DO ABOUT CHRIS...":

Normally the Sunday schedule is used on Christmas Day (although there is no evening Mass) so the principal Mass is solemn/sung. This means the choir, which has already sung at Midnight Mass, will have to sing again. This also is the case at Easter.

Midnight Mass at the London Oratory is spectacular (with full orchestra) but you have to queue for an hour and it's standing room only, and like yours is full of Prots and once-a-year Catholics. In contrast the 11 a.m. Mass on the day is equally solemn (Mozart's Coronation Mass this year) but you can always get a seat, and since Londoners tend to decamp at Christmas there are fewer than at a normal Sunday Mass.

Gene prefers to run on and on about how EVERYBODY should do EVERYTHING....WITHOUT being consulted.

FrAJM, not sure how that comment got in this combox. But the deletion could have had to do with Christmas cheer? ;-)

In any case, the Christmas Mass is special to me for many reasons. I like the idea of Advent and Christmas having clear lines of demarcation. My eldest daughter and I discuss that today: One of the advantages of growing up in military service is taking holidays when you get them. Christmas (Lent, Easter, et al) is not just one day, but a full season to say "Merry Christmas" and visit friends and family. Most of my Christmases were spent on some sort of alert or guard duty. I got the chance to go to Mass and that WAS being with my family and friends who were somewhere else doing the same to be with me.

Two of my children were born almost exactly at midnight, so I relate strongly to kicking off the jubilation at that time. In fact this year my wife wanted to stay up, open gifts, party a little then hit the 0800 Mass.

So if the Protestants want to come for the Midnight Mass, then great! That is a good thing for all involved.

Yes, the OF has a lot to answer for. The Propers of the Vigil Mass - Hodie scietis (IN & GR), Crastina die (ALL), Tollite portas (OFF), Revelabitur gloria Domini (COMM) - still have the message of Advent. But hey, let's put on white vestments, throw in all the bells and whistles, not to mention Christmas carols, and do it at four o'clock on Christmas Eve, so people can get on with celebrating the Day of Universal Excess without being distracted by the idea that Our Lord's birthday has anything to do with it.

These are the same liturgical reformers who insisted that the Vigil and first Mass of Easter be 'restored' to their 'original' times, so they're not even being consistent.