ALL I HAVE TO SAY IS AMEN AND PREACH IT HOLY FATHER! 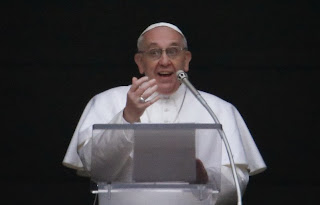 Pope laments 'sad' Christians who always criticize preaching (and so do I!)

In a homily at Mass on December 13, Pope Francis said that Christians who always criticize preachers are “sad Christians,” who are “trapped” in their own conceptions of the faith.

The people of that time preferred to take refuge in a more elaborate religion: in the moral precepts, such as the group of Pharisees; in political compromise, as the Sadducees; in social revolution, as the zealots; in gnostic spirituality, such as Essenes.

The same tendencies are visible today, the Pope continued, among Christians who invariably find fault with the message presented to them by their priests. They are caught up in their own ideologies, he said, and unable to hear the Gospel message. This is a great loss, the Pope said, because effective preaching should sometimes be upsetting. The Church, he said, “admonishes you, teaches you—SLAPS YOU, as well—but it is the very freedom that makes the Church grow.”

This problem, the Pope went on, illustrates what St. Paul said about the scandal of preaching: “That God should speak to us through men with limits—sinful men—scandalizes.” Some people focus on the weaknesses of the preachers rather than the content of their message.

“These sad Christians do not believe in the Holy Spirit,” the Pope concluded, urging his congregation to pray that they might be open to hearing the Gospel message.
Posted by Fr. Allan J. McDonald at Friday, December 13, 2013

Who is he to judge. And I see a little bit more of the name calling aimed at Catholics who love Tradition/tradition. How charitable of Francis.

To those previous comments. All I have to say is; exhibit A.

"We've had enough about exhortations to be silent. Cry out with a hundred thousand tongues. I see the world is rotten because of silence." - St. Catherine of Siena

Enjoy your Anonymous trip into Protestantism.

Anonymous, what are you implying? Please be explicit.

Also, can you please provide us with the context of these two quotes – the works from which they are taken and the circumstances they were addressing. I have tried to find this for St. Catherine but all I find are innumerable rehashes of the quotes on ultra-traditionalist Blogs – the usual fare, in other words.

“These sad Christians do not believe in the Holy Spirit,” the Pope concluded, urging his congregation to pray that they might be open to hearing the Gospel message."


Here is a fuller account, which adds some nuance:


In this account too, however, the Pope does say that “These sad Christians do not believe in the Holy Spirit.” But what does this actually mean? I do not think the Pope is suggesting they do not believe in the Holy Spirit as a theological and doctrinal proposition. In context, Pope Francis seems to be using the word “believe” in the sense of “trust in the working of.” That makes much more sense. I suspect he is looking at “fruits” to “know them” (constant criticism, retreat into narrow certainties) and judging, not the person but the act, or rather the failure, to trust in the Holy Spirit. Isn’t this the sort of thing a spiritual advisor might say to a person to challenge them (to “slap” them)?


I am sure you agree that a priest appropriately “slaps” people in the area of sexuality when he challenges them regarding abortion and birth control. Well, guess what? It doesn’t stop with those things.

More generally, I have said this before but it seems apposite to say it again. When we read the Passion we, all of us, say the words “crucify him, crucify him.” And isn’t that what we do to Christ’s representative on Earth, the Holy Father, with all these constant criticisms, whether it be of Pope John Paul II, Pope Benedict, or Pope Francis?

I am not saying that some challenging questions should not be raised, about which respectful dialogue should be held, but this constant sniping and carping does raise for me the issue of motivation and disposition. I have even now seen websites, which I will not mention here, that seem dedicated to destroying Pope Francis’s papacy. Perhaps in quoting St. Catherine of Siena you spoke more truth than you realize because she lived during the time of the Babylonian Captivity and then the Great Schism.

Pope Francis took the correct actions today to Cardinal Burke.
Sensure would be the thing to do.
He should also send him packing with the rest of the Parish Priests. He need to be out of the vatican and returned to a parish as a Priest. We do not need other vandictive Cardinals like CB at the Vatican. If he stayes the Pope better keep tight reins on him. buddy