CONTINUING HIS COURSE CORRECTION ON CLARITY MUDDIED IN HIS OFF-THE-CUFF INTERVIEWS, POPE FRANCIS MAKES CLEAR WHAT CONSCIENCE IS AND THE DANGERS OF SECULARISM 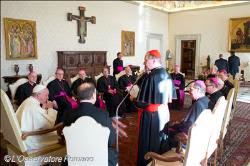 And of all the Catholics in the world who need to hear this, it is the most liberal and post-Catholic of all countries the Netherlands and the Dutch. These are excerpts from Pope Francis meeting with the Dutch bishops in Rome on their Ad Limina visits:

“The Church not only proposes immutable moral truths and attitudes which go against the grain, but also proposes them as the key to the good of humanity and social development. Christians have the mission of taking up this challenge. The education of consciences therefore becomes a priority, especially through the formation of critical judgement, in order to have a positive approach to social realities: superficial judgement and resignation to indifference can thus be avoided”.

In the society of the Netherlands, “strongly characterized by secularism”, the Pope invited the prelates to “be present both in public debate in all spheres which affect humanity, to make visible God's mercy and his tenderness to every living creature. … As I have often stated, … the Church enlarges not by proselytism but by attraction. She is sent everywhere to awaken, reawaken and maintain hope! This brings us to the importance of encouraging the faithful to seize opportunities for dialogue, to be present in those places where the future is decided; they will thus be able to bring their contribution into the debates on important social matters regarding, for instance, the family, marriage and the end of life”.


MY COMMENTS: The pope is calling for the laity to be a leaven in society to bring the Catholic dimension of immutable truths to secular culture by seizing the opportunities afford them for dialogue with the world about the beauty of our immutable truths for the promotion of family, marriage and end of life concerns.

Remember, in all of these Holland is post-Christian and actively kills those who are had the end of the life and it is done also to babies in the womb.

This is fine, but I do wish he would define "proselytism". It can be used to refer to coercive or misleading efforts, but the word also has a well established meaning that corresponds to acceptable means of evangelization. "Define your terms", I was always told in school.

Tis a step in the right direction, acknowledging mistakes is one thing, correcting them is an entirely different task.

Aberrant proselytism includes certain activities and methods that are directly intended to induce people to change their church affiliation. These include
• Making unjust or uncharitable references to other churches’ beliefs and practices and even ridiculing them
• Comparing two Christian communities by emphasizing the achievements and ideals of one, and the weaknesses and practical problems of the other
• Employing any kind of physical violence, moral compulsion and psychological pressure, e.g., the use of certain advertising techniques in mass media that might bring undue pressure on readers/viewers
• Using political, social and economic power as a means of winning new members for one’s own church
• Extending explicit or implicit offers of education, health care, or material inducements or using financial resources with the intent of making converts
• Manipulative attitudes and practices that exploit people’s needs, weaknesses or lack of education especially in situations of distress, and fail to respect their freedom and human dignity.

from: Proselytism and Evangelization: Important Distinctions for Catholic Catechists
by Fr. Leo Walsh, STD
Published by the USCCB