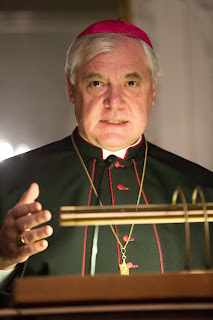 Rita Ferone of the Praytell blog has a synopsis of a talk that Archbishop Gerhard Ludwig Müller, the prefect of the Congregation of the Doctrine of the Faith gave at a December 4, the 50th Anniversary of the promulgation of Sacrosanctum Concilium, in Würzburg, Germany. While this is a synopsis and I have not seen the actual talk in English, I find that in the portion of Rita Ferone's take on the talk that I reprint below that there is nothing that I would strong disagree with in terms of the Archbishop's positive evaluation of Vatican II reforms of the liturgy as SC desired it. My comments at the end:

The Reform: A Positive Evaluation

Archbishop Müller observed that Catholics who “think with the Church” regard the reform as “essentially a success” and welcome the “rich fruits” which are fed by the liturgical piety it embodies. He contrasted this, on the one hand, with those who argue the reform did not go far enough and, on the other, with those who see the liturgical reform as a break from tradition or a deviation from right faith. He said that developments such as having the priest say the prayers of the Mass audibly and in the vernacular were not so much a break as a normalization.

The Archbishop also took issue with those who suggest that the liturgical reform is responsible for the decline in faith and religiosity in formerly Christian countries. Such problems are “post” but not “propter” Vatican II and its liturgical reform, he said. Instead of pinning the blame on Vatican II, he traced the current malaise to broader currents of thought, beginning long before the Council — from late medieval nominalism, through eighteenth century historicism, all the way up to the contemporary phenomenon of constructivism, in which ideas of truth and morality are viewed as products of social subjectivity that say nothing about reality in itself. In the end, religion becomes nothing more than illustrations of morality, and no longer the means of grace or of the encounter with God.

Müller is obviously well aware of the contested aspects of the reform in the concrete, yet one could see that he is committed to steering a course that remains faithful to the reforms of Vatican II. He recommended countering criticisms of the reform with theological reasoning. As an example, he said that one cannot dismiss those who favor celebration toward the East, and he gave a sympathetic account of it. Yet he concluded by saying that “This is a very insightful idea theologically, but it is not part of the substance of the Eucharistic celebration.” He pointed out that the theological idea of “versus populum” celebration is “the communion of all with Christ” gathered at the altar. Thus the accusation that versus populum celebration makes the altar “a mundane table” without an opening to the transcendence of God, he said, “falls short and misses the objective of the renewed liturgy.”

As everyone knows I love both forms of the Mass of the one Latin Rite! While I love Latin, I love the vernacular and how it enables both the priest and the laity to participate more easily in the Sacred Mysteries.

For the most part I like the reforms of the Mass although I think what the Anglican Ordinariate has done with the revision of their form of the Roman Catholic Mass is more in line with 21st sensibilities as it concerns the correct interpretation and implementation of Sacrosanctum Concilium as well as the more literal method of translating the Latin into the vernacular.

What the major problem with the post Vatican II Mass is not its order, its lectionary, its noble simplicity or its vernacular or facing the people. It is the loss of the sense of the sacred and I mean this within the continuity of the sense of the sacred and the reverence due God in our worship and in our everyday lives as it was prior to the Council.

Facing the people with the pre-Vatican II altar arrangement and maintaining solemnity, reverence and proper formal decorum as Pope Francis models extremely well is what will help us to get on the right track with the Vatican II reform of the Mass.

The "mundane table" to which the Archbishop refers is not the noble free-standing altar at which you, Fr Allan, celebrate the Mass. However, in Germany high altars have architectural merit which does not allow their destruction, and what is placed in front of them is frequently mundane; in many cases resembling a dining table.

I cannot take them seriously, any more than I can take Rita Ferrone seriously. She is one of the silliest women I have ever had the misfortune to read.

When he criticizes "the accusation that versus populum celebration" leaves the altar "without an opening to the transcendence of God", he criticizes the sentiments of the pope emeritus. We all know well the arguments for versus populum, and his suggestion that we do not is condescending.

"What the major problem with the post Vatican II Mass is not its order, its lectionary, its noble simplicity or its vernacular or facing the people."

True, the real problem is the loss of the sense of the sacred that both motivated activist liturgists in imposing these changes, and which in the faithful has resulted from these changes.

Granted that it's not a matter of OF or EF per se. But whatever on one's opinion on the theological issues, as a practical matter of fact, the sense of the sacred in ordinary parish life will not be restored until there is a recovery of historical orientation and gesture in the Mass.

I know it is not theological on any level, but I do not like the idea of us surrounding the 'table' with God on it. To be clear: I don' like the idea of people even thinking that can be done. It leads us to think we can even conceive of our creator.

rcg, God IS on the table - the incarnate Second Person of the Trinity under the appearance/species/accidents of bread and wine duly consecrated by an ordained priest.
- Ancil Payne18

In Archbishop Mueller's former cathedral in Regensburg there is a magnificent and famous high altar with a frontal of solid silver. This is no longer used and some way in front of it is a freestanding fixed altar of the cuboid shape which is fashionable on the continent (cf ND de Paris and most other French cathedrals). The famous choir (the Domspatzen, which Mgr Georg Ratzinger directed for many years) position themselves in front of the old high altar facing the nave. This means they are clearly heard, but does tend to make the Mass into something of a concert.

In Germany and Austria the forward altar is referred to as the 'Volksaltar' and in many baroque churches is often a moveable and even a gimcrack structure. The guidebook will dwell on the artistic and liturgical significance of the baroque altar without mentioning the fact that it isn't in fact used.

Last year I visited Rheims cathedral, where French kings were traditionally crowned. There is the old high altar, an elaborate baroque structure which has not been used for forty-odd years, and the current altar, a modern cube. Both look out of place in a Gothic cathedral.