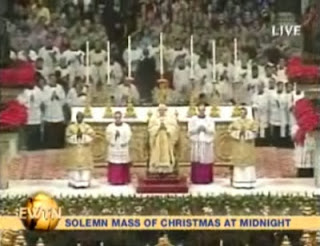 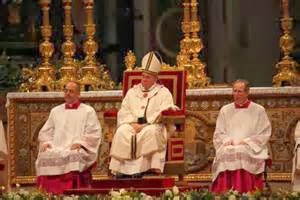 Let's face it, for all the attention and celebrity given to popes, some more than others, and the current occupant getting the most ever, at least since the early days of Blessed, soon to be Saint, Pope John Paul II, how much of an impact does the pope have on local dioceses and parishes?  From what I can tell, not much!

The two  biggest things Pope Benedict set into motion were the liberalization of who can celebrate the 1962 missal. That affected in our diocese just the Cathedral and my parish. There were sporadic celebrations maybe in two other parishes.

In terms of the "reform of the reform" apart from maybe my parish and I really can't think of any others, we placed a low crucifix on the middle of the altar and for the past year or a bit longer, we have one Sunday Mass "ad orientem" and that is only for the Liturgy of the Eucharist. Again, I know of no other parish in our diocese that does this.

In terms of chant, I think our parish is the only one that now includes the chanting of the official Introit (prior to the additional Entrance Chant from our hymnal) as well as the Offertory and Communion Chants. But these chants are the short versions in the Roman Missal, not from the Gradual and in English. Our music is from a traditional hymnal, the St. Michael Hymnal, but even with that somewhat eclectic in style.

In terms of vestments, ours are the same except for the use of some "Roman Style" vestments for the EF Mass and only on occasion for the OF, but rarely, at least for me.

So, what impact will Pope Francis have on the liturgy? I would venture to guess that it will be about as much as Pope Benedict, but a little bit less!

The best we could hope for is that priests would model what Pope Francis does in terms of how he celebrates the Mass. Let me highlight my dream for parishes throughout the world in this regard:

1. Pope Francis is solemn and sober and almost detached when he celebrates the Mass--there is absolutely no kibitzing or improvisation even at the most likely times that priests unfortunately do this. This is a wonderful thing--"saying the black and doing the red."

3. While Pope Francis liturgical tastes are not Baroque or ornate, he wears tasteful, bland vestments, but on occasion has had some with a bit of more flair, such as the Mass for the closing of the Year of faith, where once again he wore the chasuble that Pope Benedict wore for the beatification of Blessed Pope John Paul II.  His personal vestments from Argentina with matching dalmatics for deacons are simple but exquisite. If only local parishes could be as nice!
Posted by Fr. Allan J. McDonald at Saturday, December 28, 2013

I don't believe anything will change at all, at least not significantly. These sorry, lazy Priests are going to have to be forced to celebrate the Liturgy properly or they are not going to do it. Show me a Bishop who is willing to do that. The Masses I attend outside St.Jo's will remain sloppy, mundane, and very Methodist. It is sad and it makes me angry as Hell. And, no, I refuse to accept the blame for my grudging and obligatory Mass attendance at these First Methodist Catholic Churches. I accept my sinfulness and need for Confession, but Masses like this are a near cause of sin for many of us. That should not be. Any feral change is way, way down the road..maybe when, as some have said, the new generation of Priests comes into full play. I pray they are right. But, this Pope will bring about no significant change in how the Mass is celebrated…unless, hopefully, I and many others are wrong.

That should have said "any real change," not feral change. I hate this spell check. Although feral behavior might be required to effect any change...

I agree. Priests will continue to do whatever they want. On Christmas Day Mass the priest used the Christmas preface with Eucharistic Prayer IV. On the Feast of Corpus Christi and Pentecost he made up his own prefaces because he couldn't find the correct ones in the missal. I had a conversation with Father and informed him that in the new missal on certain big feasts the preface is included right after the Prayer over the Gifts, he just has to turn the page. But he can never remember that. This is a man with a doctorate. A man with an 8 x 11' leather bound, gilt edge book on a missal stand with a spot lite on it, with directions printed in red, and he still can't follow it. This is what we are dealing with.

Father McDonald,
You correctly mentioned that Summorum Pontificum has only affected the Diocese of Savannah in our parish and at the Cathedral in Savannah with sporadic celebrations of the Extraordinary Form in maybe a couple of other parishes (actually, to my knowledge, that would be once in Baxley, twice in Waycross, and once, I believe, in Augusta).

Why haven't there been more in these places or in others? Well, let me share with you (once again, with additional details) my experience at St. Joseph in Waycross. You have heard before that we had an advertised EF Mass in 2008 and 110 attended (some from out of town). Fifty people signed a written request for the periodic and regular celebration of more EF Masses in Waycross. I have provided the Diocesan Chancellor with a copy of this list so that he has a record of interest here (post Summorum Pontificum). We had another EF Mass here in 2009 and about 30 attended but our pastor had expressly directed me not to give this Mass any publicity in the Southern Cross or in the parish bulletin in advance, as I had done before, with his approval. It seems that, after that first, 2008, Mass he caught grief for having offered it and allowing it to be publicized from neighboring priests in the Valdosta/Brunswick Deanery. This may explain his directive for no publicity on the second Mass.

Since that time, we have had two pastors, one very traditional in his liturgical practices (a definite "reform of the reform" guy but he plead ignorance of Latin) and our current pastor, who has declined, in writing, my written request for periodic EF Masses in Waycross.

So, as I'm sure you're well aware, the EF has been sporadic (or non-existent) in much of the Diocese of Savannah not because of a lack of lay interest. The reason is a lack of priests who are knowledgeable and willing to offer the EF Mass (or are willing to learn it). I have heard some stories of younger parochial vicars who wish to learn this Mass but are currently constrained by their pastors. Under SC, my pastor cannot refuse to allow the celebration of the EF Mass in our parish but where, practically speaking, do I find a priest to come and offer it here? That is the problem!

Further, with all due respect to our current and immediate prior bishops, I have yet to see anything concrete that demonstrates episcopal support for the EF in the Diocese of Savannah (other than the current prominent location of the Savannah Mass and the fact that the usual celebrant is our Diocesan Chancellor). If you really want to know something about the status of the Savannah EF Mass, I would suggest that you talk to a certain young Catholic dentist in Savannah. But, getting back to the rest of the Diocese, what am I to do other than pray and hope for the assignment of a priest to our area who will be willing to offer the EF Mass?

As to the OF, I have to agree with most of what you write but priests and bishops need to understand how KEY the regular presence of the EF is to the "reform of the reform."

'Still working and praying for the EF (and the reform of the reform) in the Waycross area of the Diocese of Savannah . . .

I meant to say "your" parish (St. Joseph in Macon)--this keyboard needs to be replaced!

It has never been considered a proper function of the pope to "model" liturgy for parish emulation. So I don't see many priests being affected for the worse by Pope Francis, any more than they were affected for the better by Pope Benedict.

An interesting thing that I've noticed in the Diocese of San Jose in California. I'm sure that this is common outside of my diocese, too. When some cockamamie practice is done in Rome, those of more protestant tendencies within the Church are prone to point to the incident as justification of their ignoring the Missal and doing what they want. However, when the practice in Rome was is more along what is actually spelled out in the Missal (as with HH, Benedict XIV) then all of the sudden it was, "Oh, we can't use what happens in Rome as justification of a change in practice" even when the change would bring us into conformity with the Missal and the USCCB norms.
To paraphrase Vizzini the Sicilian, it's "Inconceivable!" that HH Francis doesn't understand this. Especially, given the brouhaha over his predecessors comments about condoms. "Inconceivable!"

It is likely that, if one does not "...see anything concrete that demonstrates episcopal support for the EF in the Diocese of Savannah..." then there is none.

This morning I watched a live Mass from a cathedral in north west England. As it was the principal Sunday Mass it had the usual trimmings - two deacons, lights, incense. There was an organ and a small mixed choir. The vestments were decent. The rubrics were followed. The priest sang some of his parts (the orations and the Preface dialogue, and the doxology at the end of the Canon, which was EP III). There were no liturgical abuses. The hymns were traditional, since at this time of the year they consist of Christmas carols.

The forward altar was the usual stone cube, with no candles or cross on it, and its starkness was reinforced by the altar cloth which just covered the top of it, with no overhang at the sides. The old high altar with its tabernacle was still in place, with chairs for the celebrant and ministers in front of it. The setting for the Ordinary was the 1970s formula of "the choir sings a line and the congregation repeats it", so everything is sung twice. It had no discernible musical merit. There was, unsurprisingly, no Latin.

What was entirely absent was the grandeur which traditionally accompanied cathedral liturgy, and for which the building was designed (by Edward Pugin, AWN's son). The service was wordy but failed to convey any sense of awe or transcendence. What I would have found frustrating was the fact that a little bit of extra effort would have yielded a vast improvement. If the priest can sing the Preface dialogue, why doesn't he sing the Preface? It's on the page in front of him, fully notated. Why can't the choir sing a Gregorian Ordinary instead of the dismal fare presented here? It is surely not beyond their capabilities or those of the congregation.

The main problem with the Novus Ordo is that it seems to encourage this sort of dull mediocrity. If it's like this in the cathedral it's hardly likely to be better in the parishes. The 2011 translation has certainly improved things, but unless the mindset changes there will be no real improvement, no matter who sits in the Chair of Peter.