SAVE THE SACRAMENT OF PENANCE AND SAVE THE CHURCH! 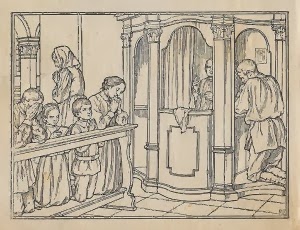 One of the greatest pastoral crisis of the past 50 years has been the decline of the use of the Sacrament of Penance. Pope Francis understands this even more so than any of his predecessors. How can a Catholic receive Holy Communion worthily and not commit a sacrilege if in a state of unforgiven mortal sin. The Church's doctrine of this Sacrament and it as the normative, ordinary means of the forgiveness of mortal sin, as well as venial if one so chooses, has not changed since Vatican II.

Pope Francis is going to be the pope of Divine Mercy which always includes the Sacrament of Penance. He is insisting now that curial cardinals and bishops hear confession every day. This is great news for Roma!

At St. Joseph Church, we have long preached the need for Confession. We now have two priests hearing confession on Saturdays so great are the numbers. We hear confession every Monday through Friday at 7:30 AM.

Pope Francis has personally directed cardinals and archbishops of the Roman Curia to take turns hearing daily confessions in a church near the Vatican.

It is also possible that the Pope himself may hear confessions there at 3p.m., but not as a matter of routine, according to Robert Moynihan, founding director of Inside the Vatican magazine.
Santo Spirito in Sassia is dedicated specifically to the Divine Mercy devotion announced by St. Faustina Kowalska 80 years ago. Blessed Pope John Paul II promoted the devotion, and also established the Feast of Divine Mercy. He died on the eve of the solemnity.

The Pope’s almoner, Archbishop Konrad Krajewski, already hears confessions there daily at 3 p.m. From now on, cardinals and other archbishops will offer the Sacrament of Penance in the confessional Archbishop Krajewski normally uses.

Moynihan reported that the plan had been in the works for some time, but the Pope wished to begin the practice “immediately."

Father Bart said the Holy Father is keen on the initiative because he wishes to “emphasize the importance of confession, and of God's great goodness in forgiving human sin."
Posted by Fr. Allan J. McDonald at Monday, December 16, 2013

It is wonderful that the pope is making the Vatican bishops and cardinals hear confessions regularly. Now if he could get these same bishops to go to confession regularly, that would be a miracle.