HOW DO YOU SPELL HYPOCRISY? L-I-B-E-R-A-L 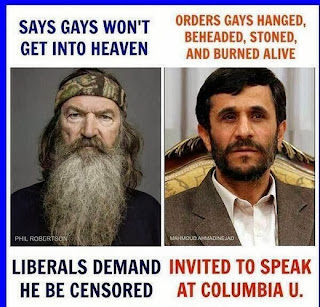 I am unsure where these juxtaposed headlines come from but a bit of context may help to put Ahmadinejad’s invitation to speak at Columbia in 2007 in some perspective. He hardly went unchallenged by the “liberals” at the event:

Perhaps any appearance of hypocrisy will be dispelled when Columbia invites Phil Robertson to speak. =)


The fruits of liberalism:

Tomorrow is the Feast day of the Holy Innocents and the below is from Fr. Shenan J. Boquet, President Human Life International


Sadly, however, the joy you and I experience at Christmas is dampened by our knowledge that millions of defenseless children remain at risk.

Saturday is the Feast of the Holy Innocents. And in a very real sense, the atrocity committed in Bethlehem some 2,000 years ago is being repeated in cities all around the world today. It is shocking to see how little has changed over the past two millennia. Herod has been replaced by the leaders of the so-called "developed" West; including our own president, Barack Obama. Herod's soldiers -- the ones who did the actual killing of the babies -- are today's abortionists.


"These then, whom Herod's cruelty tore as sucklings from their mothers' bosom, are justly hailed as 'infant martyr flowers'; they were the Church's first blossoms, matured by the frost of persecution during the cold winter of unbelief."


In the quote from St. Augustine above, he states that the Holy Innocents were killed during a "frost of persecution during the cold winter of unbelief." Tragically, the "cold winter of unbelief" continues to this day. The elitists who run the world do not believe in the sanctity and dignity of the human person. For them, life is not a gift and a right bestowed on man from God Himself. Rather, it is a mere circumstance of the human existence; and as such, something they can bestow or deny at their whim. And just as Herod decided that baby boys living in Bethlehem were expendable, so today's world leaders deem the world's unborn to be expendable.

You and I know the truth. We know that it is God alone Who gives life and has the power to take it.

Shouldn't the pictures be Pope Benedict and the bishop of Rome Francis?

Once again in the interest of providing context and perspective (and because I am a student and teacher of comparative law), here is a very useful article on the treatment of abortion in Islamic Law (the article also vividly illustrates the internal diversity of opinion that is so characteristic of Islamic Law):

I suppose I'm a liberal on this point, because I do not think the entertainment industry should support a man who publicly promotes the kind of racial attitudes of Mr. Robertson. I'm ambivalent about his other opinions, but a Southerner should know better than to say what he said about the Segregationist experience.
Those who support his racial statements should be ashamed of themselves.

Um, so how do you feel about Columbia supporting a fanatical,anti-Semite, anti-Catholic, megalomaniac?

Perhaps you did not read the ABC article for which I posted a link earlier in this thread. So, here is the beginning of that piece. Does this sound like Columbia "supporting" Ahmadinejad to you?:

When not dodging direct questions, Iranian President Mahmoud Ahmadinejad was defiant in his answers at a forum Monday at Columbia University, maintaining that his country seeks nuclear power only for peaceful purposes, that continued research is necessary to determine the facts of the Holocaust, that Iran is not supporting insurgents in Iraq and that women in his country are treated equally.

Despite fears from some that the controversial leader would go unchallenged in his comments, Columbia President Lee Bollinger quickly took the Iranian president to task in his opening statements, calling him "a petty and cruel dictator" and pointing to a number of well-documented instances in which the Iranian regime has executed children, oppressed women and imprisoned and tortured homosexuals, academics and journalists.

"I doubt you will have the intellectual courage to answer these questions," Bollinger said ahead of the Ahmadinejad's comments. "I do expect you to exhibit a fanatical mind-set."

Anon 2, Big deal. It was a chance for Bollinger to sound tough at no expense to him. The very fact that this silly, decadent, and worthless liberal bastion invited this man to speak says it all. It is beyond bad judgement and is completely in keeping with the mentality of academia everywhere in this country.

Parents, do not waste your money on college educations. Send your kids to a tech school and let them learn a real skill. Just maybe they will maintain their faith and values...

You are entitled to your opinion, Gene. Other readers can make up their own mind regarding the extent to which Columbia/Bollinger “supported” Ahmadinejad or, alternatively, provided an opportunity for him to be publicly challenged and for truth to be revealed.