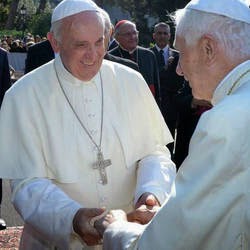 Having two Holy Fathers living at the Vatican is certainly a novel element of Church history. Pope Francis went to see Pope Benedict today and both exchanged Christmas greetings with the Holy Father. Cool, no?

This afternoon at around 5pm Pope Francis visited the Pope Emeritus, Benedict XVI to extend his Christmas wishes to him, the Holy See Press Office reports. Francis and Benedict XVI prayed together in the chapel of theformer Mater Ecclesiae monastery in the Vatican, where Benedict XVI residesand then held a private meeting.

Benedict XVI met and greeted Francis at the entrance of the residence. After a brief prayer session in the chapel, the two held a private meeting which lasted approximately thirty minutes. After the meeting, Francis, who was accompanied by his personal secretaries, greeted the other members of the Pope Emeritus’ “family”, Mgr. Gänswein and the four women of the “Memores Domini” lay association. He took his leave at about 5.45 pm.
Posted by Fr. Allan J. McDonald at Monday, December 23, 2013

You see all the Latin in that anti-traditional Midnight Mass ?
http://goo.gl/8yezXA Every word is in Latin.