The hardest worker in show business, the late, great James Brown, of my hometown of Augusta, had a move similar to the photo the the pope below as the King of Soul had his cape removed! 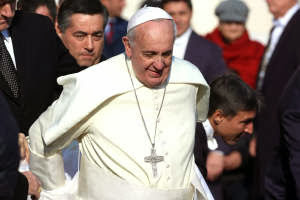 It was often said that Catholics and the world alike loved Pope John Paul II but they didn't care for his message or agree with his moral teachings. They loved his personality and the gestures he made toward people.

--That the devil is real and to be taken dead seriously

--That the Blessed Mother is the Mother of all the Faithful

--That the Church is Holy Mother and Bride of Christ

--That popular devotions have a profound place in the lives of Catholics and even in the Mass, such as Marian flairs and holding the relics of saints while professing the Faith

--That the discussion on women becoming priests is CLOSED

There are other things too that progressive Catholics completely ignore, those things that actually affect rank and file clergy and laity. Rather they focus on how he dresses both for secular and religious events; that he is more collaborative (although I think Pope Francis will rival most of his pre-Vatican II predecessors as the most autocratic pope there has been) and that he consults more widely than the previous four popes.

However, while the progressives continue to babble about Pope Francis plans to decentralize the government of the Church to local bishops and conferences of bishops, the first decision out the Gang of 8 cardinals had to do with the sex abuse scandal and making policy that is more centralized in the Vatican. Interesting no? Did you hear any progressives even mentioning this?
Posted by Fr. Allan J. McDonald at Thursday, December 12, 2013