WHY NOT MAKE DECEMBER 23RD CHRISTMAS EVE AND DECEMBER 24TH CHRISTMAS DAY? HE SAID TONGUE IN CHEEK, BUT MAYBE NOT! 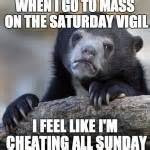 John Nolan who can be a bit opinionated as it concerns tradition, wrote something very sensible and true in my previous post on this topic:

"Yes, the OF has a lot to answer for. The Propers of the Vigil Mass - Hodie scietis (IN & GR), Crastina die (ALL), Tollite portas (OFF), Revelabitur gloria Domini (COMM) - still have the message of Advent. But hey, let's put on white vestments, throw in all the bells and whistles, not to mention Christmas carols, and do it at four o'clock on Christmas Eve, so people can get on with celebrating the Day of Universal Excess without being distracted by the idea that Our Lord's birthday has anything to do with it."

These are the same liturgical reformers who insisted that the Vigil and first Mass of Easter be 'restored' to their 'original' times, so they're not even being consistent.

My "what to do, what to do, Oh, what to do?" conundrum post, which so many seem to miss, is also about the times we begin to celebrate Mass. I brought the subject up of moving Christmas Eve to a day earlier with the tendentious PI at the Red Lobster for lunch on Christmas Eve. I suggested that because of the proliferation of "vigil Masses" for Christmas on Christmas Eve, some starting at 4:00 PM (if not earlier) and ours here at 4:30 PM (and the most heavily attended) that Christmas Day had been transferred defacto to Christmas Eve and that the day before Christmas Eve has actually become Christmas Eve.

Whose fault is this? The Vatican who allowed bishops to institute Vigil Masses which fulfilled the obligation to attend Mass on Sunday and Holy Days of Obligation and this liberalization began in the dreaded and most corrupt period of the recent history of the Church in the 1960's. That should tell us something right there!

The "bill of goods" we were sold in the 1960's about "Vigil Mass" fulfilling one's Sunday or Holy Day of Obligation Mass was that it was for people who could not get to the Mass on the actual day, like Sunday or the day of the Obligatory Mass. At first, these Masses were late in the evening of Saturday or the day before the Obligatory Mass. Most started at 7:00 PM if not a bit later.

But slowly but surely, people forgot that Vigils which could satisfy one's obligation to attend Mass, was only for those who couldn't go on the actual day and more and more people went to the vigils, primarily older people who didn't want to be bothered with Church on Sunday morning. That's a good reason not to go to Mass on Sunday, he said tongue in cheek.

Now don't get me wrong. I am not entirely opposed to Vigil Masses but these need to be reigned in and by the only people who can reign them in the bishops! Priests can do it locally, but that makes the priest idiosyncratic. The best solution is a top down solution from the Vatican as they did it when they imposed Vigil Masses as an option but with some codicils. Or perhaps this might be something decided by National Conferences of Bishops to make them feel important?

Bishops in this country and I think it was decided by the National Conference of Catholic Bishops about 15 years ago, enforce the time when the Easter Vigil is celebrated. It cannot be celebrated before sundown. That usually means no earlier than 8 PM. Of course the sundown rule would work against what I am writing because in some parts of the world sundown at the start of winter is around 4 pm if not earlier.

Vigil Masses are foreign to the Latin Rite, it is a total invention and not organic at all. If people couldn't attend Mass on Sunday Morning why not just have Mass on Sunday nights. No that would make sense so the VII crowd who just had to change EVERYTHING about the Latin Rite inventing something that even Protestants don't do. Why not just pick a day during the week that is most convenient and have that satisfy the obligation. Why not do away with the obligation all together, people are adults let them make up their own minds. That's the Vatican II belief. And move ancient feasts like Epiphany to the Sunday closest to January 6th just to make it convenient. God forbid the Church would actually like to have the liturgical life of the Church become part of amCatholics life during the week. And the stupidity of Holy Days! Doing away with the obligation if it falls on a Monday or a Saturday. After all we don't want people going to Mass too much because it is such a drudge. Priests delighting in allowing lay people to perform some of their functions like visiting the sick and administering Holy Communion until the role of the priest is seen as not really necessary. But yet Father still wants to kick back in the rectory and be supported by the money provided by the laity who work.

We used to call the Saturday afternoon Mass the "Mass of Convenience". I wonder if this another manifestation of concern for body count in the pews.

Fr Allan, thanks for making my comment the topic for a separate thread. The practice of saying a Sunday Mass on Saturday evening originated in the 1960s in Italy (even in the diocese of Rome, if I'm not mistaken) and was somewhat derided in England as enabling Italian families to pile the bambini into the Fiat 500 and get away for Sunday. Within a few years the bishops here had authorized it too.

A lot is made of changes to the Mass which actually involved replacing the Roman Rite with a new one (I'm not saying it isn't a valid one) which, apart from anything else, allows considerable variation in both language and manner of celebration. The changes to the Roman Ritual and calendar are perhaps more significant. The old rite of baptism had three exorcisms. The current rite has none. The rites for the dying are now intended to comfort those left behind, as are the funeral rites, which are either a presumptuous "Mass of the Resurrection" or a "celebration of the life of ... ". There is a "Book of Blessings" which replaced those of the Roman Ritual and which, wait for it, DOESN'T ACTUALLY BLESS ANYTHING! The new exorcism rite (1998) is so ineffective that most exorcists continue with the old one.

Anything which might have appeared difficult to modern man (hearing Mass on Sundays and Holy Days, fasting for a mere three hours before Communion, going to Confession occasionally) was either abandoned or watered down. Priests were nodded through seminary without any knowledge of Latin or proper liturgical formation. I spoke to a newly-ordained priest in 1987 who believed that Mass in pre-Reformation England was in English.

Even the EF is not immune. On the first Sunday in January I shall be singing the Mass of the Epiphany rather than the correct Mass of the Holy Name because the Bishop's Conference has so ordered it. I am neither pious nor devout. I'm not even a particularly good Catholic. But I've seen what half a century of meddling has done to the Church, and there is only one who is rubbing his hands with glee about it. The Evil One.

Our FSSP parish has Saturday Mass at 0900 so you can sleep in. Dang, too early to count for Sunday. First confession starts 0715 Sunday. Surely Father is not sending a message here?