BLAH AND DRAB OR REGAL AND BLING? DOES IT HAVE TO BE EITHER/OR RATHER THAN BOTH/AND 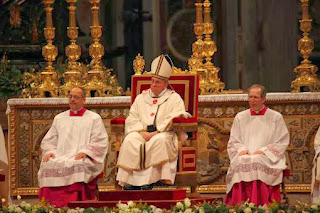 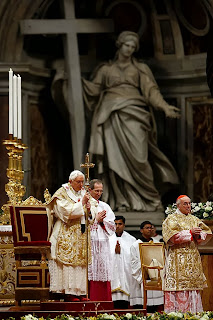 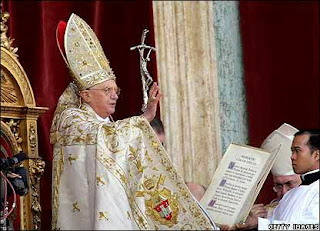 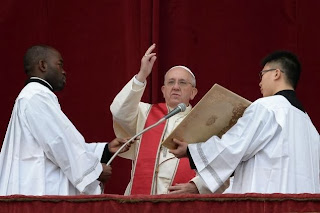 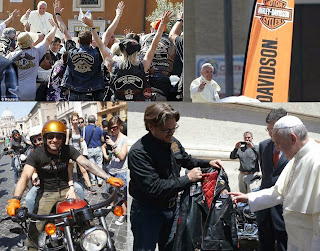 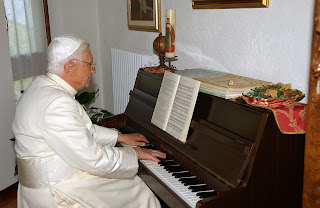 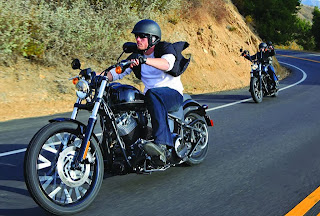 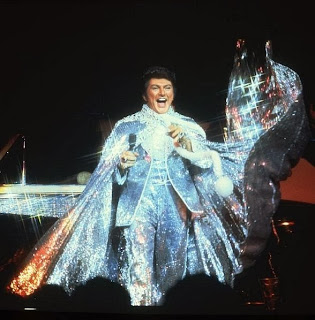 The apparel of both Pope Francis and Pope Benedict  does seem to convey their own sense of personal taste and/or personality but also a different theology of the papacy or differing aspects that could find parallels in the differences in high and low Christology (and perhaps an either/or approach rather than a both/and). Also Benedict’s tastes certainly are reminiscent of the more regal and monarchical metaphors pointing to the Kingdom of heaven (what some would derisively call bling) and and what some would call Francis’ blah or drab tastes more in keeping with the metaphor of Kingdom of heaven found in a manger.

Another way of describing this would be the dichotomy between low church/high church Anglicanism for better or worse. Certainly from the populist perspective Francis’ more down to earth style, tastes and lifestyle speaks to our casual popular culture. His style could be the Catholic "dressed down" version of popular Protestant evangelists preaching from a stool in jeans and open collar shirt or a tee shirt with some kind of slogan on it.

Another metaphor to describe Pope Francis appeal is the dichotomy between the pianist and the motorcyclist and those one normally associates with being more artistic or more athletic. One is less macho and one is more macho and I think this pope is of the macho heritage of his South American culture rather than the artsy culture of Bavaria! And of course the artsy and athletic metaphors also bespeak of sexuality issues for many, either positive or prejudicial.

At any rate, from the populist point of view, it seems that the masses (no pun intended) are flocking to see this more down-to-earth pope in Pope Francis compared to Pope Benedict who had big crowds but not like Pope Francis.

And it isn't just how Pope Francis dresses that seems to attract so many more people, especially those who are not "artsy" but how he speaks, even with imprecise, confusing messages. But one thing is very clear, the love of God for sinners. This is very attractive to a world which needs to know about their need for Mercy and God's willingness to offer it in Jesus Christ.
Posted by Fr. Allan J. McDonald at Thursday, December 26, 2013

Pope Francis isn't popular because of what he says, Pope Benedict spoke beautifully of love, charity etc. but the media never covered it. They portrayed him as a monster. And the bishops never came to his defense. Remember Regeinsburg, when they were calling for his head. Not one bishop came to his defense, not one. Francis is popular because the media has decided he should be popular. And really a picture of Liberace. Are you trying to compare and contrast Pope Benedict with Liberace. It's not funny it just shows the level to which the modern day clergy has sank. No priest fifty years ago would do something like that. Bishop Sheen was correct when he said that there was a time "when every priest was a gentleman, but now they are boorish". And please don't ask for a direct source of the quote, it's on one of the videos of his talks, just look at all of them until you find it. There is nothing praiseworthy about an impoverished liturgy. Is Francis going to demand that the Eastern Churches abandon their vestments which are much more elaborate than the West ever was. In the west only the pope wore a crown, in the eastern churches every bishop wears a jeweled crown. Should they get rid of their icons and screens? Are their Traditions/traditions in line with the gospel? This pope once again shows that he is not the servant of the liturgy or the papacy for that matter, it's all about his personal likes and dislikes. He doesn't realize that the papacy isn't about him.

I agree with you concerning the liberal media as well as liberal Catholics who denigrated and continue to denigrate Pope Benedict often simply by ignoring so much of what he said, did and taught. But as far as progressive Catholics go, there was and is, indeed, a homophobic or an accusation of homosexuality toward Pope Benedict and those who followed his style, liturgical and otherwise of being a part of the gay culture of the Vatican, something Pope Francis said on his plane interview, who am I to judge? Meaning, he did not see any Vatican Identity cards that said "gay." Yes, we are more open about it and I think we need to recognize the hypocrisy of the left who are homophobic in this regard or deride homosexuals who might desire privacy in terms of their orientation all the while remaining chaste.

"But as far as progressive Catholics go, there was and is, indeed, a homophobic or an accusation of homosexuality toward Pope Benedict and those who followed his style, liturgical and otherwise of being a part of the gay culture of the Vatican."

So by your logic the media who LOVES homosexuality should have loved Pope Benedict and his practices. And since when does the Catholic Church determine what is or isn't appropriate for the liturgy based on what the media thinks. I could care less what the media says or thinks. That's one of the problems with the clergy today. You all want to be loved and respected by the likes of the NYT, NBC, The Today Show, President Obama, Barbara Walters, David Letterman, Nancy Pelosi and that whole crew. Who cares what they think of the Church. They promote evil and perversion. The Church shouldn't be trying to placate them but to convert them. And it's not solemn nonsense either.

The funny thing is, the great majority of the vestments Benedict used were old ones, which therefore cost the Church during his pontificate nothing for him to wear. Francis on the other hand, with regard to the set made here, has had them made to match the mitre he bought with him from Argentina. So that's a chasuble and two dalmatics made in rome. That's going to cost at least €1,200 at a conservative estimate.... Ironic...

Church goods are extravagantly high in cost, even for cheap stuff! I have to agree, though, that it is a waste not to use what is there, even if Baroque and the Baroque goes with the Baroque Basilica. I personally like simple vestments and I could see myself even purchasing what Pope Francis was wearing at Christmas. I like it. But there is a part of me that likes seeing the pope, whoever he is, using what popes use. There is an irony in it in the sense that Blessed Pope John XXIII came from a peasant background in Italy. No one thought he was personally rich and he used all the papal paraphernalia.

I'm not saying that Pope Benedict was "gay." But there is evidently a "gay lobby" in the Vatican, whatever that means. And it is a stereotype that "gays" would like that which is more flamboyant. The press went after Pope Benedict because he would not flinch in terms of the Church's teachings on homosexuality and had the temerity to call it a "disorder" which enraged the "gay" community, which sees their condition as normal.
So the pro-gay media and even gays in the Church went after Pope Benedict, especially for his sense of style liturgically and outside of Mass, precisely to accuse him of latent homophobia. If Pope Benedict had the personality of Bergoglio and said some of the things that Pope Francis has said to diffuse this hatred of the Church and her teachings, I think no one would have said anything about the more "prissy" types of vesture he used. The same for Pope Francis if he started to use more of the Baroque and lace!

Decent vestments need not be expensive. There is a Polish internet company, Ars Sacra, which sells a new Roman Low Mass set in damask (chasuble, stole, maniple, burse and veil) for 113 euros. So you can kit yourself out with all the liturgical colours, including rose and black, for about $1000. Sounds like a bargain to me.

Dear Father, you do quite a job defending this Pope about everything he says and does, first he is not traditional, nor conservative, he does not like being called Pope, he dresses in cheap polyester clothing, will not wear anything pertaining to his office, said publicly he did not want to be Pope, so stop telling us he is conservative and traditional he ain't!! He is destroying the Franciscans of the Immaculate, for he hates the TLM, anything related to it, yes such as lace, stunning vestments, Gregorian chant, well you get it Father.

I agree with anonymous. Francis appears on the balcony of St.Peter's on Christmas Day standing at a podium wearing a house cassock to give a blessing to the WORLD. A house cassock. On the other hand we should be grateful he wears that, because we all know if he could he would be in a grey tab shirt. I predict by next Christmas Francis will have abandoned the white cassock all together. And YES how he dresses is important.

"And it is a stereotype that "gays" would like that which is more flamboyant." I don't think many would disagree that the majority of priests today are gay or at the very least effeminate. That doesn't bother me as long as they live a celibate, prayerful life. But usually gay men are very neat, and have taste. But all the gay priests in the Church seem to hate beauty and are the opposite of neat. They destroy churches wear ugly vestments and have sloppy Masses but elegant rectories and fancy cruises. Why elegance doesn't translate into the liturgy is beyond me. And by elegance I mean presenting themselves with class and caring about the liturgy. Example: our new priest is very effeminate, he wears a tee shirt, shorts and flip flops all the time even for Mass. He leaves the rectory in a dirty, yellow alb and you can see right through it. He doesn't care enough to put on pants for god sake. So I guess the stereotype about gays being fussy isn't true at least not where Catholic priests are concerned.

True it seems the gay priests are the ones who destroyed our lovely churches ripping out high altars, statues, communion rails etc. Having said that, Bergoglios humble act is old already, the media and left love him but detested our beloved Benedict who looked and acted like a Pope and gave us our TLM back, so keep pretending this person in Rome is doing good while he erodes what is left of the Holy Roman faith.