ALLELUIA YES WE WORE ROSE FOR GAUDETE SUNDAY AND WE CARRIED IT TO THE EXTREME (NOT REALLY, PARADE WAS CHERRY BLOSSOM FESTIVAL)

Did your parish go to Rose extremes as mine? 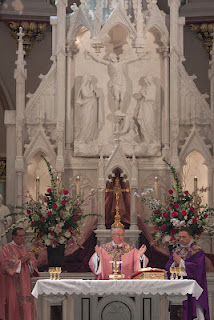 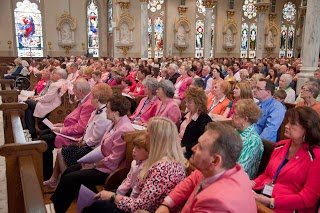 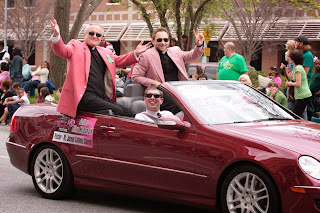 At St. Joseph, Waycross, our new deacon wore a rose stole (to which I quietly gave him a "thumbs up" before Mass). We have not had a rose chasuble set since the seldom used semi-Gothic pre-Vatican II set was retired a few years ago because its violet orphrey was faded on the shoulders.

If I knew something wouldn't "happen" to it (and that our pastor would wear it), I would gladly buy our parish a new set (probably very similar to what we had before) in rose!

Two pink coats riding, like Miss America, on the back of a convertible? That doesn't look like Holy Orders for service to me. It looks more like two big shot wanna be show-offs.

Come on now, think hard, and think clown nose!!!! Also, think of all the rides through St. Peter's square, wearing white of course, but quite the celebrity!

The clown nose is...self deprecating. The pink coat and the red convertible are... self aggrandizing. The all white is...the least he can do. The pink coat is...well...perhaps you may be the one who needs to "think hard". And he IS the Vicar of Christ. You're a humble hillbilly servant in Macon, Georgia. Have a holy Christmas. Peace be with you.

Anonymous, You have your terms mixed up. The hillbillies are all north of Atlanta and in the mountains. My wife is a hillbilly from West Virginia. Technically speaking, Fr. MacDonald and I would be "rednecks," unless you wanted to get into ethnic origins, in which case I would be a "Mick" and Fr. would have the choice of being a "Mick" or a "Wop." "Cracker" is also a favorite aspersion cast upon those from Ga. and Alabama. So, get your slurs straight...