POPE BENEDICT DEFINTELY HAS BETTER HAIR, AND YES I SUFFER FROM THE SIN OF ENVY IN THIS REGARD! 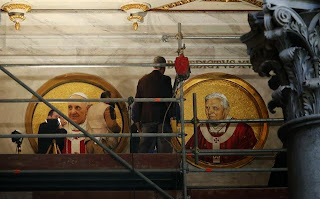 I was in the Patriarchal Basilica of Saint Paul Outside the Walls about three weeks ago and saw where they were getting ready to install Pope Francis' painting next to Pope Benedict. That somewhat famous art historian and Roman tour guide and daughter of Mary Ann Glendon, Liz Lev, did a fantastic tour of this Church, St. Peter's and the Vatican Museums and St. John Lateran as well as the Roman Forum. She told us that a false rumor was circulating in Rome. The rumor was, according to her, that Pope Francis did not want a fancy painting of himself taking up much needed space for popes in this basilica where legend has it that once the space runs out that will be the last of the popes. Well, that was false as you can see from the image above and in fact there are many, many more spaces for future popes, including the last pope, Pope Peter II.
Posted by Fr. Allan J. McDonald at Wednesday, December 11, 2013

They should have used the picture of him wearing that clown nose which was so classy.

Anonymous, you are just bad…bad, but right! LOL! I am jealous…I was always the bad boy on this forum until now...

Okay, so how about a bit of context from the Mail Online on November 6, 2013:

“The Pope showed he has a sense of humour as well as a caring side today when he donned a red nose at the wedding of members of a charity that uses clowns to cheer up children.

Pope Francis appeared at the Vatican to congratulate the newlyweds from the Rainbow Association Marco Iagulli Onlus who were getting married there.

As the pair came down the steps, he took the opportunity to show his support for the charity by donning the universal symbol of comedy.”

It was tacky and undignified…uncalled for and gauche.

Francis has no problem wearing a clown nose but a mozetta is not tolerated.

“It was tacky and undignified…uncalled for and gauche.”

Why can I so easily hear the Pharisees using the same words about Jesus?

Anon2, And when did Jesus put on a clown nose? Come on, Anon 2, you are not that trite. You sound just like Anonymous Chip and Ignotus.

Jesus was deeply aware of his mission and calling. He bore himself with the dignity of majesty in all His actions and encounters. He was, if nothing else, consistent…unlike some of His representatives on earth now...

Perhaps you have the benefit of time travel. I do not. How much time did all Jesus’s actions reported in the Gospels actually take? Not three years I bet. So, what was Jesus doing the rest of the time? Nothing? No, I didn’t think so. And it is not unreasonable to believe (as I do) that some of that time was spent in relaxing with his friends, expressing humor, etc. I can see Jesus while in human form donning a clown nose to express support for and draw attention to a charity that helps children with cancer, including by wearing clown noses when they go see the kids (the newlyweds apparently worked with that charity). Evidently you cannot. I believe in a God with a sense of humor. Don’t you? And humor is not sinful in itself, is it? In fact, isn’t it often a manifestation of Christian joy?

Of course, if Pope Francis had done this during Mass, well, that would be an entirely different matter. But he didn’t. In fact, it seems that he is quite solemn and dignified during Mass. Context is everything.

I suspect Pope Francis is animated by something he wrote in Evangelii Gaudium:


“Christ is the ‘eternal Gospel’ (Rev 14:6); he ‘is the same yesterday and today and forever’ (Heb 13:8), yet his riches and beauty are inexhaustible. He is for ever young and a constant source of newness. . . With this newness he is always able to renew our lives and our communities, and even if the Christian message has known periods of darkness and ecclesial weakness, it will never grow old. Jesus can also break through the dull categories with which we would enclose him and he constantly amazes us by his divine creativity. Whenever we make the effort to return to the source and to recover the original freshness of the Gospel, new avenues arise, new paths of creativity open up, with different forms of expression, more eloquent signs and words with new meaning for today’s world. Every form of authentic evangelization is always ‘new’.

That isn’t trite. It is profound. One thing is for sure – Pope Francis does not appear to be a sourpuss (pace Anonymous with his privileged information), and seems to the suggesting that we not be either. I agree. And I bet Jesus was also no sourpuss.

P.S. Sorry, I omitted the exact citation for Evangelii Gaudium. It is from section/paragraph 11.