IS POPE FRANCIS MAKING THE POINT THAT THERE MUST BE A CONNECTION BETWEEN LITURGICAL RITUAL AND WITNESSING TO CHRIST OUTSIDE OF THE LITURGICAL CONTEXT? 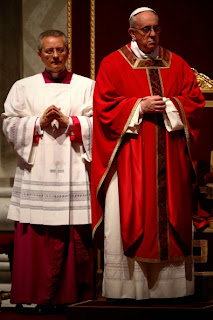 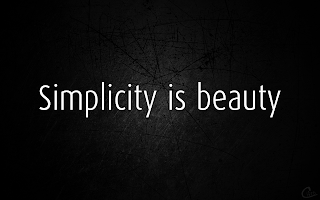 As I have repeatedly said, Pope Francis is perhaps the most populist, orthodox, down-to-earth and quite pastoral pope in the history of the Church.

There is continuity even though there is rupture with Pope Benedict in that which counts. The rupture is that Pope Francis is a pastoral academic and not a university academic and he is a vowed religious who has taken the vow of poverty but appreciates  St. Francis version of this vow over his own Jesuit version. In fact he tends towards that of an ascetic in the Trappist tradition. We cannot say this about Pope Benedict or his papal and liturgical style. This is a huge rupture, but only in spirituality and superfluities.

While Pope Benedict modeled directly his view of the Liturgy as well as the Second Vatican Council being interpreted as "reform in continuity" and I want to emphasize both REFORM and CONTINUITY, Pope Francis is modeling what the proper celebration of the Liturgy that goes beyond mere ritualism that touches the way we live our lives in the world, especially in the specific acts of faith, hope and charity (love).

But even here Pope Francis is in continuity with the words of Pope Benedict from Pope Benedict's encyclical Sacramentum Caritatis and the section on the Most Holy Eucharist as the source and summit of Catholic life in terms of everyone's interior participation in the rituals of the Church.

The following is a summary of Pope Benedict's astute words:

"The Church's great liturgical tradition teaches us that fruitful participation in the liturgy requires that one be personally conformed to the mystery being celebrated, offering one's life to God in unity with the sacrifice of Christ for the salvation of the whole world. For this reason, the Synod of Bishops asked that the faithful be helped to make their interior dispositions correspond to their gestures and words. Otherwise, however carefully planned and executed our liturgies may be, they would risk falling into a certain ritualism. Hence the need to provide an education in Eucharistic faith capable of enabling the faithful to live personally what they celebrate.'

Finally, a mystagogical catechesis must be concerned with bringing out the significance of the rites for the Christian life in all its dimensions – work and responsibility, thoughts and emotions, activity and repose. Part of the mystagogical process is to demonstrate how the mysteries celebrated in the rite are linked to the missionary responsibility of the faithful. The mature fruit of mystagogy is an awareness that one's life is being progressively transformed by the holy mysteries being celebrated. The aim of all Christian education, moreover, is to train the believer in an adult faith that can make him a "new creation", capable of bearing witness in his surroundings to the Christian hope that inspires him."

MY FINAL COMMENTS: When you read Pope Benedict's words above, isn't this what Pope Francis has be saying in word and deed? Doesn't he connect liturgy to life and living simply liturgically and otherwise?

But he is underscoring in a profound new way a pastoral doctrine or theology that is inclusive of sinners, but sinners who are called to conversion, acknowledging their sin and going to the Sacrament of Mercy, Penance especially through frequent confession.

This pope has the ability to be an enforcer of his pastoral theology. He isn't about the "end of the world" culture wars so many in and outside of the Church are waging. He want Christ crucified to be preached and lived with the blessed assurance that in Christ the battle is won. That means exhibiting a profound hope and witnessing to it in the most positive way possible without shrill rhetoric and words that continuously castigate those who are in need of salvation and the Church's sacraments.

Yes, there are dangers in this approach, but I am willing to wait until the history books are written on this pope's papacy before I question how the Holy Spirit is guiding him in this place and at this time.
Posted by Fr. Allan J. McDonald at Tuesday, December 17, 2013

I'm also willing to wait and see, what other option do we have?

In the mean time, Cardinal Burke was replaced by Wuerl and Nichols of Westminster for picking bishops..same-ole-same-ole coming? TBA

I am not sure Simplicity is beautiful. I think elegance is.

"He tends towards that of an ascetic in the Trappist traition" Trappists keep silent and brew very good beer. This Pope is the most garrulous ever.

True, I wasn't thinking of their vow of silence which might be good for the pope to use more frequently?