FROM THE STOVE TO THE TABLE, FROM KITCHEN TO DINING ROOM: SACRIFICE AND BANQUET

This first photo is a corruption of the true meaning of the Holy Sacrifice of the Mass, the next three photos though capture both sacrifice and banquet and in the proper places, from stove to table. 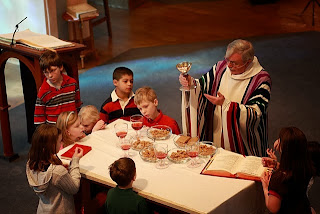 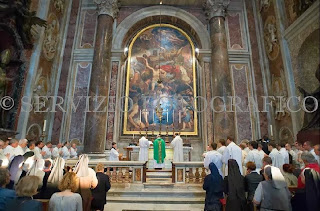 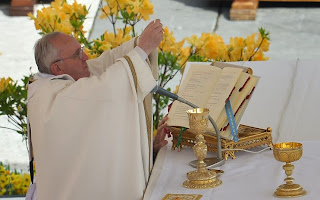 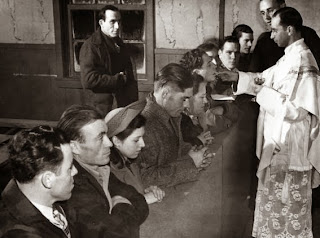 There are two aspects to the Holy Sacrifice of the Mass, but without sacrifice, the other makes no sense. The other is "banquet." I use banquet rather than meal as meal has a casual connotation in English or refers to a variety of styles of grazing for food.

There is a lot of talk about the loss of the sense of the sacrificial aspect of the Mass. And yes, in the post-Vatican II period this has occurred with happy-clappy Masses, altars that look like tables, and emphasis on what the bread and wine look and taste like and how it is broken, poured shared and drunk. The actions of the priest and laity become the focus of the Mass and thus what the priest and laity are doing is the primary focus of this misguided implementation of post-Vatican II revisions of the Mass.

Prior to Vatican II, the Eucharistic Banquet was obscured when only the priest received Holy Communion which was possible in that era.

But as it concerns the doctrine of the Mass, it is not either Sacrifice or Banquet, but both together. But the emphasis must be on the Sacrifice for without it the Banquet would make no sense.

All metaphors limp, but one could look at the sanctuary of the church as the kitchen where the stoves of the ambo and altar are located as in homes where the sacrifice is prepared and offered and the nave of the church as the actual banquet hall or dining room where the table is located (altar railing in traditional designs) where we receive the Sacrificial Offerings as Food and Drink, much like the temple worship of Judaism before the destruction of the temple.

Formal banquets aren't eaten in the hot, messy kitchen where the sacrifice is prepared and cooked. It is presented in the dining room, clean and beautiful. In fact one could say the same for the ambo in the sanctuary, no one comes to the ambo to hear the word and consume it, do they? No, they remain in the dining room of the nave.

So I would recommend to recover the sense of the sacred as well as the sacrificial aspect of the Mass, that the Liturgy of the Eucharist be celebrated ad orientem. A return to altar railings would emphasize the proper place of the banquet for the laity.

The entire Mass is sacrificial and banquet when one thinks of the Liturgy of the Word as sacrifice and the laity receiving the Word as banquet to sustain them in the Body of Christ. The specific aspect of the Banquet of the Most Holy Eucharist though, actually begins with what is called the "Communion Rite" which begins with the "Our Father."

Then when the priest is celebrating Mass ad orientem, at the Banquet of the Mass, he turns to the laity and proclaims, "Behold the Lamb of God, Behold Him who takes away the sins of the world (through his sacrificial death and resurrection)....Then the priest receives the Most Precious Body and Blood of our Lord to complete the Sacrifice and all others who in a state of grace come forward to receive our Risen Lord's Body, Blood, Soul and Divinity whereby God makes them a part of His Son's Body the Church and keeps them united in life and mission.

I would like someone to answer a couple questions regarding liturgical abuses. How come the Church has rules and norms about how the sacraments are to be administered but when serious abuse occurs regularly nothing happens? Example: Fr. Phlager in Chicago, go to youtube and watch. He sits at a table, makes up the entire Mass including the Eucharistic Prayer. This has been going on, unchecked, not for a week, not for a month, not for a year, but for almost 3 decades. My problem is not so much with this priest but with a bishop who does nothing to stop this. Would a priest who started stopping communion in the hand be allowed to continue doing this for 30 years? Why is everyone so afraid to confront liberalism in the Church and actually do something to stop it. Does any working lay person go into work and ignore the rules of the employer day after day and still keep there job? The Church has it's own set of laws but it seems when they are violated nothing happens. Example: the bishops of Germany publicly planning on violating existing Church law regarding communion and remarried divorced people. Is anything going yo be done? Or is another teaching/custom going to be changed just because liberals don't like it and Traditional Catholics be told once again to basically shut up or get out?

Anon anon, are you suggesting that many bishops are morally bankrupt and spiritually derelict, evidenced by their countenancing serial abuse of the faithful, especially in the liturgy (as well as in other areas)?

Somewhat off topic, I think you may find this article very interesting:
http://www.foxnews.com/opinion/2013/12/04/pope-francis-is-catholic-churchs-obama-god-help-us/

And, Tommy G, Rush and The Donald and I want to see his Baptismal certificate. Don't you?
Pius I

Even with what some would characterize as a progressive (liberal?) Pope, there is still a huge gap between the Holy Father and
Mr Obama.
Pope Francis has not come out in favor of same-sex(really same -gender) marriage, abortion, contraception and embryonic stem-cell research, all of which Mr. Obama apparently has no problem with. One shudders to think of what the liturgy would look like if someone like Mr. Obama was actually sitting in the Chair of Peter.

I don't want to alarm you George, but the word on the street is that Francis' real name (on his long form Baptismal certificate)is listed as "Jorge Mario Hussein Bergoglio".

Anonymous, the med school called…they want you as a model in the proctology class.

It warms my heart to be able to bring out the real inner you, Pastor. You set wonderful example for us. All of that higher education you have had is really paying off.

You're a class act, preacher.