THE SECOND VATICAN COUNCIL IS THE NORM FOR THE CHURCH UNIVERSAL 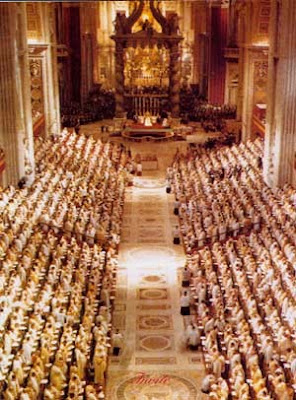 The nature of the intellectual assent that is owed
to the teachings of the Council
The following article, written by Monsignor Fernando Ocáriz Braña, Vicar General of Holy Cross and Opus Dei (also one of the Vatican representatives in the doctrinal talks with the Priestly Fraternity of Saint Pius X), was published in this afternoon's (dated tomorrow) edition of the official daily of the Holy See, L'Osservatore Romano.

On adhesion to the Second Vatican Council

The forthcoming 50th anniversary of the convocation of the Second Vatican Council (25 December 1961) is a cause for celebration, but also for renewed reflection on the reception and application of the Conciliar Documents. Over and above the more directly practical aspects of this reception and application, both positive and negative, it seems appropriate also to recall the nature of the intellectual assent that is owed to the teachings of the Council. Although we are dealing here with a well-known doctrine, about which there is an extensive bibliography, it is nevertheless useful to review it in its essential points, given the persistence - also in public opinion - of misunderstandings regarding the continuity of some Conciliar teachings with previous teachings of the Church's Magisterium.

First of all, it is not pointless to recall that the pastoral motivation of the Council does not mean that it was not doctrinal – since all pastoral activity is necessarily based on doctrine. But, above all, it is important to emphasise that precisely because doctrine is aimed at salvation, the teaching of doctrine is an integral part of all pastoral work. Furthermore, within the Documents of the Council it is obvious that there are many strictly doctrinal teachings: on Divine Revelation, on the Church, etc. As Blessed John Paul II wrote: “With the help of God, the Council Fathers in four years of work were able to produce a considerable collection of doctrinal statements and pastoral norms which were presented to the whole Church” (Apostolic Constitution Fidei Depositum, 11 October 1992, Introduction).


Assent Owed to the Magisterium

The Second Vatican Council did not define any dogma, in the sense that it proposed no doctrine with a definitive act. However, even if the Magisterium proposes a teaching without directly invoking the charism of infallibility, it does not follow that such a teaching is therefore to be considered "fallible" - in the sense that what is proposed is somehow a “provisional doctrine” or just an “authoritative opinion”. Every authentic expression of the Magisterium must be received for what it truly is: a teaching given by Pastors who, in the apostolic succession, speak with the “charism of truth” (Dei Verbum, n. 8), “endowed with the authority of Christ” (Lumen Gentium, n. 25), “and by the light of the Holy Spirit” (ibid.).

Naturally not all the affirmations contained in the Conciliar documents have the same doctrinal value and therefore not all require the same degree of assent. The various levels of assent owed to doctrines proposed by the Magisterium were outlined in Vatican II’s Constitution Lumen Gentium (n. 25), and subsequently synthesised in the three clauses added to the Niceno-Constantinopolitan Creed in the formula of the Professio fidei published in 1989 by the Congregation for the Doctrine of the Faith and approved by Blessed John Paul II.

Those affirmations of the Second Vatican Council that recall truths of the faith naturally require the assent of theological faith, not because they were taught by this Council but because they have already been taught infallibly as such by the Church, either by a solemn judgement or by the ordinary and universal Magisterium. So also a full and definitive assent is required for the other doctrines set forth by the Second Vatican Council which have already been proposed by a previous definitive act of the Magisterium.

The Council’s other doctrinal teachings require of the faithful a degree of assent called “religious submission of will and intellect”. Precisely because it is “religious” assent, such assent is not based purely on rational motives. This kind of adherence does not take the form of an act of faith. Rather, it is an act of obedience that is not merely disciplinary, but is well-rooted in our confidence in the divine assistance given to the Magisterium, and therefore “within the logic of faith and under the impulse of obedience to the faith” (Congregation for the Doctrine of the Faith, Instruction Donum Veritatis, 24 May 1990, n. 23). This obedience to the Magisterium of the Church does not limit freedom but, on the contrary, is the source of freedom. Christ’s words: “he who hears you hears me” (Lk 10:16) are addressed also to the successors of the Apostles; and to listen to Christ means to receive in itself the truth which will make you free (cf. Jn 8:32).

Documents of the Magisterium may contain elements that are not exactly doctrinal — as is the case in the documents of the Second Vatican Council — elements whose nature is more or less circumstantial (descriptions of the state of a society, suggestions, exhortations, etc.). Such matters are received with respect and gratitude, but do not require an intellectual assent in the strictest sense (cf. Instruction Donum Veritatis, nn. 24-31).

The Interpretation of Teachings

The unity of the Church and unity in the faith are inseparable, and this also involves the unity of the Magisterium of the Church in every age, since the Magisterium is the authentic interpreter of Divine Revelation transmitted by Sacred Scripture and by Tradition. This means, among other things, that an essential characteristic of the Magisterium is its continuity and consistency through history. Continuity does not mean an absence of development; down the centuries the Church deepens in her knowledge, in her understanding and, consequently, also in her magisterial teaching of Catholic faith and morals.

A number of innovations of a doctrinal nature are to be found in the documents of the Second Vatican Council: on the sacramental nature of the episcopate, on episcopal collegiality, on religious freedom, etc. These innovations in matters concerning faith or morals, not proposed with a definitive act, still require religious submission of intellect and will, even though some of them were and still are the object of controversy with regard to their continuity with earlier magisterial teaching, or their compatibility with the tradition. In the face of such difficulties in understanding the continuity of certain Conciliar Teachings with the tradition, the Catholic attitude, having taken into account the unity of the Magisterium, is to seek a unitive interpretation in which the texts of the Second Vatican Council and the preceding Magisterial documents illuminate each other. Not only should the Second Vatican Council be interpreted in the light of previous Magisterial documents, but also some of these earlier magisterial documents can be understood better in the light of the Second Vatican Council. This is nothing new in the history of the Church. It should be remembered, for example, that the meaning of important concepts adopted in the First Council of Nicaea in the formulation of the Trinitarian and Christological faith (hypóstasis, ousía), were greatly clarified by later Councils.
The interpretation of the innovations taught by the Second Vatican Council must therefore reject, as Benedict XVI put it, “a hermeneutic of discontinuity and rupture,” while it must affirm the “hermeneutic of reform, of renewal within continuity” (Discourse, 22 December 2005). These are innovations in the sense that they explain new aspects which have not previously been formulated by the Magisterium, but which do not doctrinally contradict previous Magisterial documents. This is so even though, in certain cases — for example, concerning religious freedom — these innovations imply very different consequences at the level of historical decisions concerning juridical and political applications of the teaching, especially given the changes in historical and social conditions. An authentic interpretation of Conciliar texts can only be made by the Magisterium of the Church herself. Therefore, in the theological work of the interpretation of passages in the Conciliar texts which arouse queries or seem to present difficulties, it is above all necessary to take into account the sense in which they have been interpreted in subsequent Magisterial interventions. Nevertheless, there remains space for legitimate theological freedom to explain in one way or in another how certain formulations present in the Conciliar texts do not contradict the Tradition and, therefore, to explain the correct meaning of some expressions contained in those passages.

Lastly, in this regard, it does not seem superfluous to call to mind that almost half a century has passed since the conclusion of the Second Vatican Council and that in these decades four Roman Pontiffs have succeeded one another on the Chair of Peter. An assessment of the teaching of these Popes and the corresponding assent of the Episcopate to that teaching should transform a possible situation of difficulty into a serene and joyful acceptance of the Magisterium, the authentic interpreter of the doctrine of the faith. This must be possible and is to be hoped for, even if aspects that are not entirely understood remain. In any case, there remains legitimate room for theological freedom and for further opportune in-depth study. As Benedict XVI wrote recently: “the essential content that for centuries has formed the heritage of all believers needs to be confirmed, understood and explored ever anew, so as to bear consistent witness in historical circumstances very different from those of the past” (Benedict XVI, Motu Proprio Porta Fidei, 11 October 2011, n. 4).

The Second Vatican Council must have said something that Satan did not want us to hear, otherwise the controversy would have ended decades ago.

Almost all of the bad things I hear about the council involve ABUSES and TWISTING THE WORDS of the council to imply that it said and allowed things that it didn't say and allow. Confusion is sown by Satan, and it serves him well.

Instead of worshipping God, fighting evil, and leading others to Christ, we are wasting time bickering amongst ourselves- you can almost hear Satan laughing in the background.

The Pope is currently fixing the abuses that have occurred, and many of those who created the mess are retiring now. I have faith that Pope Benedict will bring this controversy to an end, and the Light of Christ will usher in a "new springtime" for our Holy Church.

This is very interesting, but I don't understand one thing: If the Second Vat Council didn't define any new dogmas and was just pastoral, and re-affirmed all the teachings of the Church, what great new insight did the Council deliver that we are required to give our assent to in order to be Catholic?

We will have unity when we once again have consistency.