DIVERSITY IN MY PARISH KICKED UP A NOTCH! 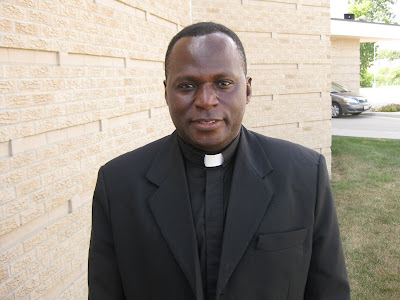 Fr. Godfred Boachie-Yiadom was born on July 17, 1960 in Ghana, West Africa, and was ordained a priest on July 29, 1995 for the Catholic Diocese of Obuasi in Ghana. He served as a Pastoral Associate at the St. Thomas Cathedral, Obuasi, the Diocesan Director of Vocations, the Diocesan Youth Chaplain and the Diocesan Chaplain for the Knights and Ladies of Marshall. From 1998-2001, Fr. Godfred was a resident priest at the St. Aloysius Gonzaga Church, Cincinnati, assisting in pastoral ministry and teaching religious education at the parish school while he took classes at the Athenaeum of Ohio. From 2001 to 2008, he taught Scriptures and spiritual theology at the St. Paul Catholic Seminary, Accra, and at the Kumasi Archdiocesan Lay Theological Institute.

Father has been back in the United States on sabbatical and study leave since 2008, helping at Our Lord Christ the King Church, Cincinnati, and at St. Benedict Church, Dayton, while working on his Doctoral Program at the International Marian Research Institute at the University of Dayton. He currently holds Masters Degrees in Biblical Studies and in Systematic Theology from the Athenaeum of Ohio. "I must say I am very much happy and excited about my new pastoral assignment and anxiously look forward to be part of the St. Joseph parish family at Macon." 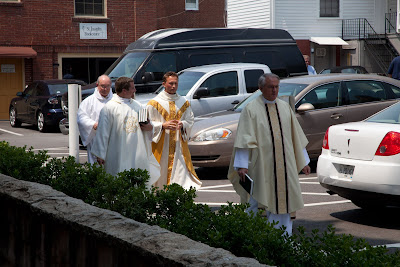 Father Dawid Kwiatkowski is from Poland and has been in this country for five years. He was ordained in June and had his first Mass at St. Joseph the day after.

In front of him (in the shadows) is his new pastor, yours truly, Father Allan Joseph John (Sainati)MacDonald.
My father was from Judique, Cape Breton, Nova Scotia, Canada. My mother Isolina Clara Sainati-MacDonald is from Livorno,Italy and I was born in Napoli. We came over to the USA as a family in the summer of 1957 when I was three years old.

We three priests of orient are, now living in the heart of Georgia with its unique take on English and its own wonderful culture.

But how much cultural diversity can we three priests take in the holy rectory and how much can our parishioners take not all of whom are southern, but many from Asia, Africa and Europe not to mention the Middle East?

Oh the joy of being Catholic!

If Father Boachie-Yiadom is anything like the other priests I've known from the African continent, you and your parish will indeed be blessed. Virtually every priest I've met who grew up and was ordained in Africa has been hardcore orthodox and heaven knows we need more like that. He will fit right in at St. Joseph.

Small world. Please ask the good Father Godfred if he recalls Fr Satish Joseph also of the UD Doctoral Program. And please let him know I do not oppose the BEavercreek bus stop because I am a mean man.

Our pastor is from Ghana. Thank you,Ghana!

To ease the cultural differences within the Parish I counsel that we all speak Latin during the Mass.

Damn!! That's brilliant, why has no one in the Church ever thought of that before? Oh wait...

Father Godfred rocks. Seriously! We are so very blessed to have three such holy and knowledgeable spiritual guides at St. Joseph! Thank you, Holy Spirit, for guiding our former Bishop Boland and our new Bishop Hartmeyer in sending these specific, diverse, Godly men to our parish. And thank YOU, Father McDonald, for following in our Holy Mother's footsteps by saying "Yes" when faced with the challenges of so much change at St. Joseph over your 7 years with us! God bless you.
~Ruth Sykes