CREATED IN THE IMAGE AND LIKENESS OF GOD ARE WE ETERNAL, WITH NO BEGINNING AND NO END? 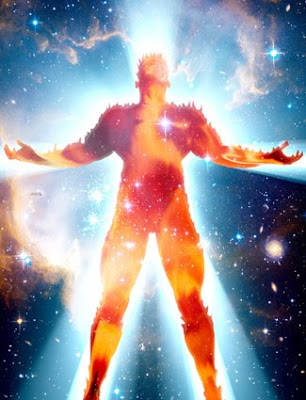 Is this heresy? In time our immortal souls become incarnate in the pro-creative act of mother and father and by the power of the Holy Spirit (since all creation comes from God as its source).

From this can we also say that just as God has no beginning and no end, He simply is (I AM) that we too are like that? By this I mean was there ever a time when we as individuals were never a "thought" in the Mind of God? That well before we were conceived that we were? Is the "thought" of who we are "eternal," with no beginning or end since this thought is in the mind of God? Does God ever cease to think of what He thought (since there is no time in eternity and thus no past or present or future but only "is")?

Thus can we say that if the soul is immortal because of this very truth, that God also thinks of our bodies too before they were created in the procreative act which makes our bodies eternal too? Therefore, since the Original Sin of Adam and Eve which we inherit at the moment of our material conception interfered with God's eternal plan and corrupted it and thus necessitated the incarnation of the eternal God by the Holy Spirit and in the Blessed Virgin Mary in time to save us (Body and Soul since both were meant to be eternal, unified and uncorrupted) from this stain of sin in the Blood of Christ at the Cross which washes us of that Original Sin and any actual sins we may have committed in other to restore us to the Original Thought and plan of God from all eternity?

Therefore, not only are our souls immortal but also our bodies, but in the material order of things stained by sin, the material corrupts and soul while not disintegrating like the material is corrupted too and cannot live with God in Heaven while in a corrupt form therefore needs purification/washing in the Blood of Christ both here in time and/or in eternity in purgatory?

So at the end of time and at the Second Coming, eternity will be realized and understood. The resurrection of the Body will occur and those saved will live for an eternity in paradise with God with their bodies and souls according to the glorified body of Jesus Christ.

And those souls damned to hell will have their bodies too in hell but in the corrupted un-redeemed form with all its sin, disease and decay still attached just as their souls?

Is this true or not according to logic, reason and implication? Does it go against Catholic teaching?
Posted by Fr. Allan J. McDonald at Saturday, December 17, 2011

Some heavy-duty Platonism there, Father. Reminds me of the old Augustine vs Aquinas discussions we used to have in grad school. Certainly, we have always existed in the mind of God, God being immutable, eternal, and omniscient. However, the physical world and, presumably, our bodies were created ex nihilo and, according to Holy Scripture, will perish. Thus, God will establish a New Creation...a new Heaven and a new earth, giving us new, glorified bodies in a Creation free from sin and evil. Platonism tends to diminish the evil in the fallen creation and to grant a god-like status to the human soul. We have to be careful here...though we are eternal as thoughts in the mind of God, we do not share ontologically in His "godness." Any attribute of the human soul does not exist of its own eternally, but only as posited and sustained by God.

True the earth will perish as do our bodies, but return at the end of salvation history, new heaven and new earth? Just as our bodies will be new? Of course, the bodies of the damned will be joined to the souls of the damned, how will their bodies be?

Would we come to understand our bodies in the same way we see the Body and Blood of Christ in bread and wine?

RCG, That is close to blasphemy.

Father, you're about to think yourself into being a Mormon if you continue down the road of believing our souls are eternal! I'm pretty sure that's incorrect (although your gloss about God's pre-knowing us is interesting...).

You know, I cannot recall ever reading any Church teaching on the resurrection of the damned and the characteristics of their resurrected bodies. This will be an interesting topic to research today! Every Catholic needs a copy of Fundamentals of Catholic Dogma on the shelf!

I can "think" of a meal I want to prepare, but that meal does not exist until it is prepared. "Mealness," like our mortal bodies, must exist in time and space.

Pin, what I mean is some sort of transformation as a result of God's grace. I just have a problem perceiving this body as going for eternity in any useful fashion, so a 'new body' of a kind I do not yet know.

RCG, The body does not go for eternity. We exist in the Resurrection in a new, glorified body. RE: viewing our bodies as we view Christ's in the Eucharist. Never. Only in the Resurrection do we become perfect and behold God as He is. There is no Eucharist in Heaven, nor any Church. We are completed in Christ.

The only Person who already has His resurrected body is Christ Himself.

We know He bore the marks of His crucifixion, could eat food, could walk through walls, and looked different (He was mistaken for the gardener).

It seems to me that this is one of those MYSTERIES OF FAITH that we will not have a definative answer to until the end of time.

Look into Augustine's argument for God creating all things at the beginning in seminal form. If I remember correctly, he argues all has been created already in seminal form and they simply unfold in time. He offers this argument to avoid the Platonic idea that souls exist prior to their "fall" and joining of a human body.

When I was a little girl and trying to figure out who made God my brain would hurt-- this blog did the same thing!

Yes, Fr. Pablo. The "rationales seminales." I thought it was a remarkably inspired insight and sort of trumped the evolutionists.

Pin, and that is what I meant. We become one in the body of Christ. "We are what we eat".

Fr Pablo, that unfolding is consistent with what science is discovering about our physical universe. As with the Theory of Natural Selection it seems the Word of God is more in tune with what we are coming to appreciate about the universe than against it.