THE POPE IS NOT CHRIST, HE IS THE SUCCESSOR OF SAINT PETER AND ALL THAT THAT MEANS AND THE VICAR OF CHRIST 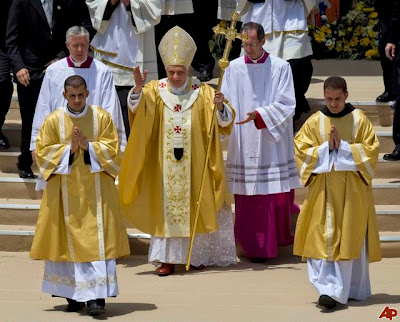 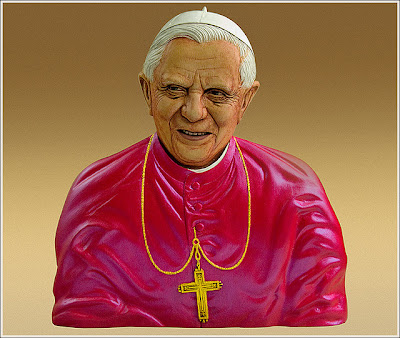 Every pope, because he is not God and sometimes more like St. Peter than God, is a mixed bag in terms of his papacy. This was true of Paul VI and John Paul II. It is true of Benedict the XVI. One of the things that I have liked about Benedict is perhaps what others would view as the greatest weakness of his papacy, he has not made himself the star of the show. Whereas John Paul II by shear force of his youthfulness at the time of his election (my age now, 57)and his energy, charisma and power to command the world stage, created what I despise in priests, the "cult of the personality." But John Paul's cult of the personality was necessary at that particular time in the history of the world and the Church. From all accounts, John Paul II was not a good administrator (governor) either.

No matter the ability of the pope or his sanctity, God uses the papacy as a part of His overall plan of salvation within the context of human history, salvation history.

My favorite religious reporter who writes for my least favorite and so-called National Catholic Reporter, John Allen has written a very good commentary on how some view Pope Benedict's papacy. As always, John Allen is fair and balanced as well as accurate. YOU CAN READ IT HERE BY PRESSING THIS SENTENCE.

The key [to evaluating this papacy] lies in grasping that Benedict XVI sees himself as a teaching pope, not (at least, not primarily) a governing pope.

Should our next Pope sound like this? It would command the world's attention and the media's too!:

I guess I'll need to read the book but the article makes it sound like a lengthy whine about what the author does not like about BXVI's style. As far as leadership this Pope obviously believes in accountability but has the restraint not to just fire the entire lot of bishops. The reporter who wrote the book clearly has a European view of things and his complaints, if accurately portrayed in the review, are based on that world view. Fortunately Popes are not usually so narrow in their own views.

Perhaps Mr. Allen and the author are saying that, while Pope John Paul neglected the Church internally to concentrate on the world externally, Pope Benedict is doing the reverse, concentrating on restoring the faith, liturgy, and identity of the Church, realizing that this restoration is a prerequisite to its illuminating the world as Pope John XXIII envisioned when he convened Vatican II (which because of unfortunate timing failed to happen in the aftermath of the Council.)