THE MASS AS A DANCE, THAT IS, THE SOLEMN HIGH EXTRAORDINARY FORM OF THE MASS 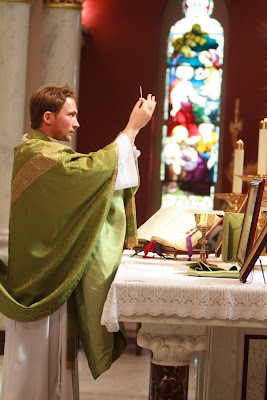 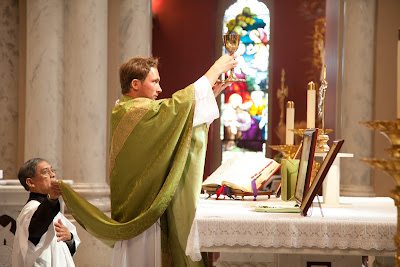 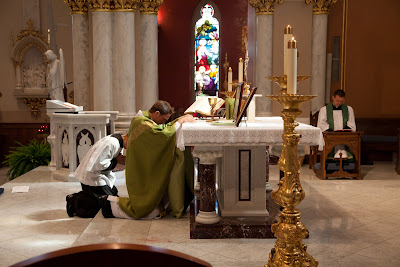 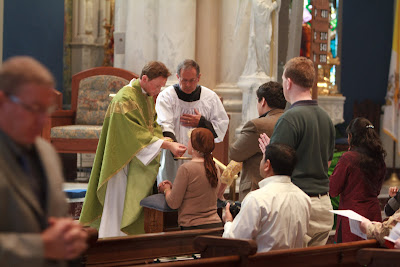 We shouldn't sing at Mass, we should sing the Mass! We shouldn't have liturgical dance at Mass, the Mass is the dance!

The following is a Solemn Sung Mass from 1941 and a beautiful expression of it. The quality of the video is poor and dark, however if you watch closely and listen closely you will learn much about not only the technical and theological aspects of the Mass, but more importantly the pre-Vatican II spirituality and devotional understanding of this Mass. What a pity that we lost the spirituality and devotional aspects of this Mass when it was reformed. Was that necessary? I say no! It did not have to happen and in part I would say the loss of this is what contributed to the loss of Catholic identity that we have not fully recovered yet--but the days are coming says the Lord.

This is narrated marvelously by Bishop Fulton J. Sheen. He captures not only the theology of the Mass but the sentiment that we all should have toward the Mass.

Please note what I mean when I say that there is not need for Liturgical Dance when one realizes that the Liturgy is the Dance--we've lost that too with the reform of the dance aspect of the Mass and substituted banal, secular dance in some parishes at Mass. What a pity!

Hey Father, why doesn't St. Joseph have altar rails? I think the church would look so much better if they did... Just wondering..

After my two years of daily exposure to the TLM (with an FSSP priest) in Little Rock in 1993-94, I truly do miss the choregraphic precision and symmetry of the TLM when it is properly celebrated. The symmetrical cadence of the Latin adds to the beauty of the whole Rite.

And, yes, while rubrical rigidity can be overdone, still, part of the beauty of the TLM is its rubrical precision in terms of the priest's movements and gestures, all of which have meaning and purpose, based on centuries of organic development (some would use the derisive term "accretions").

I love to hear the repeated ending "Per Christum Dominum Nostrum" (Through Christ Our Lord) and see the priest bow his head every time the name of Jesus is said.

Von, Frajm spent all the money for the altar rails on rat exterminators.

The dance of the celebrant is truly impressive in a TLM. I think the catechesis needed to get everyone understanding why the postures, positions, and directions are done is a big challenge. This is the advantage of the vernacular. I also think it is immensely rewarding for the congregation and worth every moment spent studying it. Frankly, it is sort of an adult worship. I can see now why the people in my parish that dislike the TLM think that people who love it are snobs. It is hard not to get excited about the prayers and liturgy when it is so rich. My group that studied the new translation were simply going through the motions because they had to and went out their way to mock it. I spent a few sessions trying to discuss, without lecturing, why the grammar of the translation was important, not just new words. I was afraid I was going to break up the group and get reported to the head of the RE so I let it drop.

I can't tell where this is going, but I think that many will be more open to it if they can be properly taught and shown the purpose of what is going on.

I'm not opposed to placing the altar railing back, but the only way to accomplish it is to extend the first step of the sanctuary out for there to be enough room to walk behind it and for people to kneel in front of it which means we would loose up to two pews in front of it and about 40 seats. That would be difficult to lose.

I would avoid using the term "dance" in relation to the Mass. It plays to the sixties/seventies humanistic nonsense of "everything is about human self-pexpression" and brings to mind all the morons making fools of themselves and the Church with this "liturgical dance" idiocy. A professor once asked me to drop his theology course (which I happily did) when he got so angry at me. He had been going on and on about dance being a sign of the "presence of the kingdom" and vomiting all kinds of Peter Berger, Paul Ricouer, and Paul Tillich at us. I asked him out loud in class, "Well, Dr. Hodgson, would you say, then, that when Aaron built that golden calf and the Israelites danced all around it worshipping it that this was also a sign of the presence of the kingdom?" Of course, the class broke up with laughter. His response, "Now, Williams, you are making me angry. Why don't you just turn in a drop slip!" Ah, the signs of the Kingdom...LOL!

My real point about the Mass as a Dance is that those who would like liturgical dance today (and they, thank God, are few in number, but it still raises its ugly leg here and there) is that the dance they proposed for the liturgy is imposed upon the liturgy. Whereas the Solemn High EF Mass is a dance in the proper sense of the word in terms of how it is choreographed and the precise movement of the priests, deacon, subdeacon and altar servers. This is a dance! The Liturgy is the Dance, not imposed dances added to it. Just like the Mass is the song, the songs added to the Mass. The OF Mass does not have a choreography--it is left to the creativity of those who plan the Mass and more often than not, it is sloppy and unrehearsed. There is no way to have a Solemn High EF Mass with deacon and sub deacon and a whole host of acolytes and not rehearse the precise movements that are mandated by the rubrics. In the OF Mass, one has to rely upon what they recall the EF Mass would have done, but now our movements are purely utilitarian, to get from point A to point B with little or no choreography or "dance."

Ehh...I would still avoid the term. However, carrying the analogy further, if the Mass is a dance, then EMHC's are like having the audience get up on stage and join in the National Ballet's presentation of Swan Lake...

The narration is vintage Sheen, and at the 4:10 minute mark--while describing the Vidi Aequam--the good bishop delivers my nominee for the most memorable (and hilarious) single line uttered by a human being during the 20th century:

"It is a long-established principle of the Church never to completely drop from her public worship any ceremony, object, or prayer which once occupied a place in that worship."

2) The Bishop misunderstood the role of development of liturgical tradition, but his was the dominant understanding of that era. We do change our worship, and rightly so. His thinking may have been a popular way of understanding the evolution of things liturgical, but it was lacking.

I would love to see the rails restored to the altar, even if that meant I would have to forgo the privilege of a pew for the remainder of my days at St. Jo's. Father consider me a volunteer if you need someone to coordinate some effort towards that goal (and yes if I could write you a check for $100K I would have already done so).

Now, when we see the good Father Kwiatkowski "dancing" the Liturgy of the usus antiquior at St. Joseph again?

I was privileged to see and hear Fr. Dawid during his service in Savannah as a transitional deacon. The intense focus evident in these photos is something I see less often than I would hope, in other parishes.

Ignotus, since we are playing English teacher, your phrase, "Two errors in Bishop Sheen's comment..." is not a sentence. Fail.