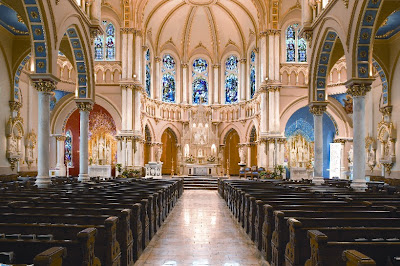 Yesterday I celebrated three wonderful Masses for the Solemnity of the Immaculate Conception. Two were in the marvelous corrected English translation that is already producing much fruit and renewed reverence for the Sacred Mysteries.

The other one was the EF Low Mass. Although I could have encouraged the congregation to sing an opening and closing Marian hymn, we simply spoke the texts of this Mass.

While I like Latin and have enjoyed celebrating the Latin Mass, I constantly wonder why in the name of God we can't do parts of it in English like everything the laity hears and speaks. I wouldn't request any change but that.

We had a large group for the EF Mass and so ahead of time I went out and reminded them that they could participate with every part of the Mass that the Altar Servers respond. But quite frankly it is difficult for many to speak the Latin out loud and I suspect they are self-conscious.

I really think that more people would avail themselves to the EF Mass if only the Holy Father would allow the vernacular for the laity's parts that they hear, speak or sing.
Posted by Fr. Allan J. McDonald at Friday, December 09, 2011

We'd be much more confident as a congregation with our Latin if we got to use it EVERY Sunday :)

It is audiably obvious when we come to those parts of the EF which we had spoken in Latin during the OF prior to the new Translation since the responses are much more confident and outspoken. I also found it easier to speak the Latin than Sing the Latin as is usually done at the High Mass.

See how much benefit we'd derive from EF Low Masses every Sunday? Coincidence? I think not!!

Fr., I wish you would be conflicted over the fact that at 7pm Mass the Church was less than half full, yet there were eight extraordinary ministers of Holy Communion. If the object is to get through Communion more quickly (which is irreverent in prospect), then it probably would move more smoothly and more quickly with just the Priest and a Deacon or two. I just don't get it. It is such an unnecessary distraction, not required, and awkward.

Father,
It's times like this that I wish I lived in Macon! After two solid years of daily exposure to the EF in Little Rock, AR in law school (in the early 1990's) I have had to maintain my Latin response proficiency by making low voice Latin responses at the OF English Masses (not always, but not infrequently). The hardest "tongue-twister" has always been the "Suscipiat!"

As I can tell you from having lived it, Templar is right. Regular exposure to the EF can make the Latin a liturgical "second language." While one may not be conversationally fluent in Latin (which I'm not), still, one gets very used to the Latin Mass Ordinary and the responses (and being conscious of their meaning)become second nature.

Even when I respond in English in an English Mass I still find myself expecting the priest to hold up the Body and Blood of Christ and say "Ecce Agnus Dei, ecce qui tollis peccata mundi" (I had become so used to the priest turning to face the people while doing this in the EF).

This is such a world of technology. Perhaps an mp3 recording could be make of a single person(not pointing fingers...hint hint) clearly reciting the responses. I know that if I could hear them and follow along a few times at my own pace, then I would feel more confident.

In my country, Brazil, we put someone to speak latin loudly or in a microphone, and the congregation begins to follow him. It teaches people to speak in latin.

"I really think that more people would avail themselves to the EF Mass if only the Holy Father would allow the vernacular for the laity's parts that they hear, speak or sing."
..Yes..you are right about that.
Also, if the EF were offered regularly at a more convenient time of day.
What if it were offered when it's easier to take the family to it instead of smack in the middle of the afternoon?

At the EF, the placement of a leader for the congregation is a great idea. It can perhaps even be a congregant in the pew is well versed and speaks clearly and loudly (an alternative idea to someone at a microphone - which isn't actually a bad idea).

I still am of the opinion that having the monthly EF Mass at 5pm instead of 2pm is a way to make it more accessible to families, won't impose on those morning Mass folks who would raise a ruckus, and also would lighten the priests' load.

That's simply my humble and selfish opinion. I'm tired of chosing between disrupting my family's activities, or separating myself from my family to attend alone, or missing the EF and having to wait another whole month for the next opportunity. If it were celebrated at a regularly offered Mass time, then it would be so much easier for parents like me to be able to attend the EF.
I'm not proposing that everything should be made 'easy', rather I'm just merely stating my personal real-world experience and observations.
Just my 2-cents worth.

what about as the Saturday Vigil once a month?

I'm with Squeeker...but, how about at Saturday Vigil a couple of times a month...like every other. Then we could go to Confession and directly to a Latin Mass. Halleluja!

HOWEVER...I pray we will get to the point where one Sunday morning Mass is always an EF high Mass. *sigh*

I'd be delighted to make the EF my normal Mass, if only it didn't mean an 80 mile round trip every week.

I am with Squeeker Lamb on this - make the EF Mass more available to those who want to attend - a Vigil Mass 1x/month would be a great beginning (too bad I only have a 10 hr drive to get there...)! -pgal

I think there's just something unnatural about having the EF as a Saturday Vigil. Not contesting the legality...just...well..."it don't fell right".

Anyway, I have, and will continue to jockey my families schedule around to attend the Mass when it is offered since I think it's just that important. Just as I drive 40 Miles round trip to hear any Mass at St Joseph versus my geographical Parish. Life is too short to endure bad Liturgy more than is necessary. Would I prefer it at a better time than 2PM on a Sunday, yes, and I think 5PM Sunday is the most practical alternative simply because those accustomed to attending an OF at 5PM Sunday could probably be accommodated at the Saturday Vigil without being put out too much, unlike trying to insert the EF into one of the Sunday morning slots, especially during the school year I think that would be terribly disruptive to those who attend those Masses because they abut CCD time.

I think having it at a normal time slot would improve attendance, actually I think grow it. But that raises another question. Since we know MP:SP stipulates a "stable group" for access to the Mass, and we also know that Father MacDonald has a manpower shortage on his hands, for lack of a better term, preventing the addition of a whole new Mass, and likewise has a "customer service" problem, so to speak, that prevents him from swapping the EF into one of the Sunday Morning regular slots (or maybe any regular slot) the question becomes in my mind, what can we, the Latin Mass Community at St Joseph, do to rectify this problem. Collect names pledging support of a regularly scheduled EF? A big enough list, submitted officially, perhaps allows Father more leverage or latitude?

I'd even suggest that switching the EF to once a month on Sunday at 5PM, and the remaining Sunday 5PMs in the month said as OF's, but ad orientem, and with the unchanging parts in Latin, would have a tremendous value in exerting a gravitational pull not only upon each other, but on the regular OF now as well that the translation is so vastly improved.

I enjoy speaking the latin responses in the Mass. My only complaint- the DOMINE NON SUM DIGNUS is spoken far too quickly; it reminds me of when I was little and my friends and I used to have "races" to see who could finish saying a memorized phrase first. At EWTN, they say it at normal speaking speed, even at the OF Mass. It is nice to hear and encourages participation and memorization (this is how I learned it).

A Saturday Vigil or a Sunday 5pm would both basically work.
Just one little thought though...Saturday afternoons are filled with kids' ballgames, birthday parties, etc.
If we want to turn the Church around, gotta appeal to the parents/kids group.
Two generations are affected at once.
(Most families are not like Templar's family, unfortunately.)
I'm just talking real world here...for consideration.
Although it would help atttendance to celebrate the monthly EF at EITHER the Vigil Mass or the Sunday evening Mass.
Templar's ideas for how to celebrate that same Sunday evening Mass on the non-EF Sundays are spot-on, in my opinion. Personally,I REALLY like those ideas, and it would create a certain traditional and rich 'culture' around that 5pm Mass...sign me up!!!

I agree with what everyone has said about having the Latin Mass at a more convenient time and more frequently. I would also suggest (in all humility) that the rubrics be more carefully adhered to as it is VERY distracting for those of us who know this Mass very well when there are things done incorrectly. I'm thinking particularly about having an altar server read the Episle.

I'm not trying to be negative, but if the Mass is going to be said, it should really be said properly. I know the readings are allowed to be read in the vernacular according to UE, but there is no provision that allows for the Epistle to be read by an altar server.

I am intrigued by Father McDonald's idea that the vernacular provision in UE includes the Introit and Post-Communion. I'm not sure I agree with that idea, but I think that is a reasonable reading of the provision of UE. Frankly, if that helps put people in the pews, all the better as it is one possible reading of UE.