ADVERTISEMENT FOR MIDNIGHT MASS AT THE KRYSTAL KATHEDRAL (KLICK TWICE ON VIDEO FOR FULL SCREEN):

THIS WILL BE A COMMERCIAL DURING THE MIDNIGHT MASS FROM THE KRYSTAL CATHEDRAL: 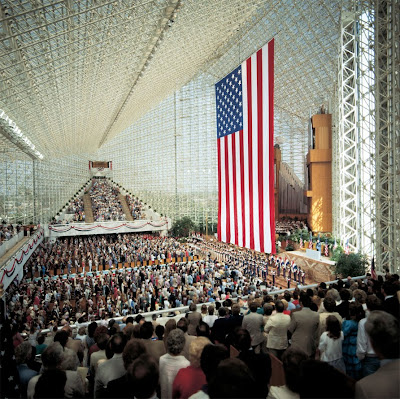 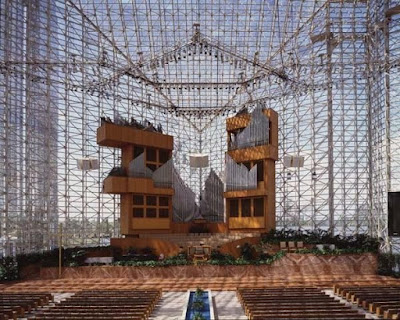 Crystal Cathedral sale to diocese a milestone; some see a miracle December 18, 2011|By Nicole Santa Cruz, Los Angeles Times The deal was a triumph for ecumenism and for Orange County's growing Catholic diocese. Cathedral founder Robert H. Schuller is pleased. "I think the Crystal Cathedral will be, for us, the heart and center for our Catholic community," said Bishop Tod Brown of the Orange County Roman Catholic Diocese. "I think the Crystal Cathedral will be, for us, the heart and center… (Allen J. Schaben, Los Angeles Times) December 18, 2011|By Nicole Santa Cruz, Los Angeles Times Whenever clergy from Asia, South America or Europe visit Roman Catholic Bishop Tod Brown in Orange County, they all want to see one church, but not one of Brown's. They want to see the Crystal Cathedral. For decades, the architectural landmark — famous for its 10,000 panes of glass and 236-foot bell tower — has been synonymous with the Rev. Robert H. Schuller and his "Hour of Power" broadcasts. That is about to change. Ads by Google Last month, the Crystal Cathedral property became the future home of the diocese after a bankruptcy judge approved the sale for $57.5 million. The Vatican has signed off and diocese officials expect escrow to open soon. In Orange County, where a third of the population is Catholic, the deal represents both vast demographic change and the rising influence of the church. "I think the Crystal Cathedral will be, for us, the heart and center for our Catholic community," said Brown, who reached the mandatory retirement age of 75 on Nov. 15, two days before the court victory. He will help oversee the transition because a successor has not yet been named. Such cooperation between Catholic and Protestant faiths was once unimaginable in American Christianity. In a rare interview, Schuller told The Times that he never saw it that way. "I think it could have happened 20 years ago because I haven't changed," he said. "It's who I have always been." The 85-year-old minister, who became the pivotal unifying force in the bankruptcy sale, said he has always respected the Roman Catholic faith and considers it the "mother church." Schuller also said he drew inspiration for his "Hour of Power" from Catholic Archbishop Fulton J. Sheen, whose own popular TV show in the 1950s paved the way. "The Roman Catholic Church isn't going to change its theologies," Schuller said. "I trust them." Still, Brown's tenacious pursuit of one of the most recognizable Protestant symbols surprised many, even Brown himself, who said the idea "never crossed my mind" until several lay advisors approached him. After all, he had long planned to build a cathedral in Santa Ana for an estimated $200 million in response to the booming Catholic population. He even hired an architect last year.

But he quickly saw the bankruptcy as a chance to fulfill his dream in a different way and began a bidding war for the church property with Chapman University.

In the final 24 hours, Brown said that even he thought "it was all over." Then Schuller, who had won over millions of believers through his credo of "possibility thinking," told the court he could not abide the thought that Chapman might someday use the cathedral for nonreligious purposes. The deal was struck.

Diocesan officials were elated, with one attorney calling it a miracle. As Brown put it, "ecumenism has got a shot in the arm."

The acquisition unquestionably raises the profile of the nation's 10th-largest Roman Catholic diocese and could help it emerge from the shadow of the Los Angeles Archdiocese.

"It was a tactical decision," said Father Thomas Rausch, a professor of Catholic theology at Loyola Marymount University. "Here's this beautiful church with a rich history in Orange County and an identity that's already established. It's a bargain for the local church."

It was a bittersweet victory, though, because Brown knew it marked the end of an era for Schuller's world-famous Crystal Cathedral Ministries, which has three years to vacate under terms of the deal, whereupon the Catholic diocese will use the campus.

Sheila Schuller Coleman, the founder's daughter, is senior pastor and continues to preach "possibility thinking," though the philosophy has not brought the $50 million in donations that could have staved off a sale.

"There's plenty of time for God to perform a miracle," she told congregants on a recent Sunday. At the front of the church, a table was set up with sign-up sheets for a "miracle" prayer drive.

"I feel like it's not over until it's over. Anything can happen," she said. "This place has its trademark. Nobody can take that."

That trademark is exactly what appealed to the diocese.

When Brown succeeded Bishop Norman McFarland in 1998, there were 600,000 Catholics in Orange County. There are now 1.2 million. That growth can be seen on almost any Sunday. For many parishes, the norm is standing-room-only turnout for Mass; at others, the Sunday crowds spill out the doors. Mass is said in 10 languages, including Vietnamese, Polish, Mandarin, Korean, Indonesian and Spanish.

During Brown's tenure, he dedicated nine churches, bringing the diocese total to 57. He also appointed Latinos and women to key positions and gave a new parish a Vietnamese name, Our Lady of La Vang, a first for a Catholic church in Southern California.

But he never lost sight of building a cathedral, first announcing plans in 2001.

They've probably been served there for the "Lord's Supper."

They don't have Krystal restaurants in SoCal. They'd never make it there--too much competition.

frankly, I am so put off by it I can't bring myself to trust my own opinion. It's like some commenting on the beauty another man's wife. Or lack thereof.

"Mass is said in 10 languages, including Vietnamese, Polish, Mandarin, Korean, Indonesian and Spanish."

How much you want to bet Latin isn't one of them?

Honestly, the location isn't bad either. It's right by the I-5 which cuts through the middle of the diocese and near a couple of other freeways so that the entire diocese has rather easy access to the thing.

We all should go to the diocesan website and pray for Bishop Brown. http://rcbo.org/about-us/bishops/prayer-for-the-bishop.html

I've not seen a website where the Bishop requests your prayers. Good on him for that.

As for the Crystal Cathedral, it's a touch less of a mystery now.

I visited it in the 1990's when we lived in CA. I was still a Protestant then & was morbidly fascinated by it's architecture & attempt at grandeur - like the Cathedral at Koln, Germany but in a 'Protestant American Tradition' was what came to my mind at the time. Then I found out that several blocks of low income housing had been razed to build it, displacing dozens of poor families in the process - wow.

So now I am not sure what to think & perhaps I will not until I go back & see it in operation as a Catholic Cathedral.

It is very close in location to Disneyland - that makes sense somehow... -pgal