JUST WHAT DID VATICAN II WRITE ABOUT THE REFORM OF THE TRIDENTINE MASS?

In no way was this intended by Vatican II or later developments as it concerns the reform of the Mass: 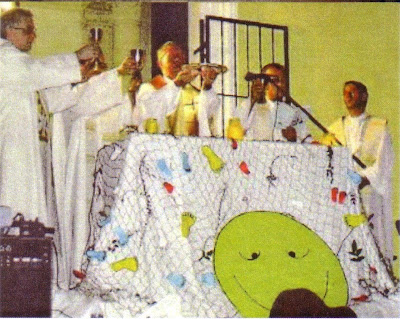 Reading the summary of Sacrosanctum Concilium below, we can see that the Second Vatican Council asked that the reform of the Mass have "noble simplicity" and expanded Liturgy of the Word, the Prayers of the Faithful and that the faithful receive Holy Communion consecrated at the Sacrifice they attend. It also laid out the principle of concelebrated Masses. It asked that the Latin be preserved and in some specific ways. Oddly enough though, the New Roman Missal does not have an appendix in the back of it for the Order of the the Mass and Eucharistic Prayers in Latin as did the one just discarded. The only Latin in the new Missal is for the Sanctus, the Pater Noster and the Agnus Dei and these are in the main body of the missal not in an appendix. I'm not sure what to make of that.

SUMMARY and Excerpt from the SACROSANCTUM CONCILIUM

As the Constitution on the Sacred Liturgy, Sacrosanctum Concilium was one of the most significant measures enacted by the Second Vatican Council. It was approved by the assembled bishops by a vote of 2,147 to 4 and promulgated by Pope Paul VI on December 4, 1963.

Mother Church earnestly desires that all the faithful should be led to that fully conscious, and active participation in liturgical celebrations which is demanded by the very nature of the liturgy. Such participation by the Christian people as "a chosen race, a royal priesthood, a holy nation, a redeemed people (1 Pet. 2:9; cf. 2:4-5), is their right and duty by reason of their baptism. In the restoration and promotion of the sacred liturgy, this full and active participation by all the people is the aim to be considered before all else; for it is the primary and indispensable source from which the faithful are to derive the true Christian spirit; and therefore pastors of souls must zealously strive to achieve it, by means of the necessary instruction, in all their pastoral work. (SC 14)

CHAPTER II
THE MOST SACRED MYSTERY OF THE EUCHARIST

47. At the Last Supper, on the night when He was betrayed, our Saviour instituted the eucharistic sacrifice of His Body and Blood. He did this in order to perpetuate the sacrifice of the Cross throughout the centuries until He should come again, and so to entrust to His beloved spouse, the Church, a memorial of His death and resurrection: a sacrament of love, a sign of unity, a bond of charity [36], a paschal banquet in which Christ is eaten, the mind is filled with grace, and a pledge of future glory is given to us [37].

48. The Church, therefore, earnestly desires that Christ's faithful, when present at this mystery of faith, should not be there as strangers or silent spectators; on the contrary, through a good understanding of the rites and prayers they should take part in the sacred action conscious of what they are doing, with devotion and full collaboration. They should be instructed by God's word and be nourished at the table of the Lord's body; they should give thanks to God; by offering the Immaculate Victim, not only through the hands of the priest, but also with him, they should learn also to offer themselves; through Christ the Mediator [38], they should be drawn day by day into ever more perfect union with God and with each other, so that finally God may be all in all.

49. For this reason the sacred Council, having in mind those Masses which are celebrated with the assistance of the faithful, especially on Sundays and feasts of obligation, has made the following decrees in order that the sacrifice of the Mass, even in the ritual forms of its celebration, may become pastorally efficacious to the fullest degree.

50. The rite of the Mass is to be revised in such a way that the intrinsic nature and purpose of its several parts, as also the connection between them, may be more clearly manifested, and that devout and active participation by the faithful may be more easily achieved.
For this purpose the rites are to be simplified, due care being taken to preserve their substance; elements which, with the passage of time, came to be duplicated, or were added with but little advantage, are now to be discarded; other elements which have suffered injury through accidents of history are now to be restored to the vigor which they had in the days of the holy Fathers, as may seem useful or necessary.

51. The treasures of the bible are to be opened up more lavishly, so that richer fare may be provided for the faithful at the table of God's word. In this way a more representative portion of the holy scriptures will be read to the people in the course of a prescribed number of years.

52. By means of the homily the mysteries of the faith and the guiding principles of the Christian life are expounded from the sacred text, during the course of the liturgical year; the homily, therefore, is to be highly esteemed as part of the liturgy itself; in fact, at those Masses which are celebrated with the assistance of the people on Sundays and feasts of obligation, it should not be omitted except for a serious reason.

53. Especially on Sundays and feasts of obligation there is to be restored, after the Gospel and the homily, "the common prayer" or "the prayer of the faithful." By this prayer, in which the people are to take part, intercession will be made for holy Church, for the civil authorities, for those oppressed by various needs, for all mankind, and for the salvation of the entire world [39].

54. In Masses which are celebrated with the people, a suitable place may be allotted to their mother tongue. This is to apply in the first place to the readings and "the common prayer," but also, as local conditions may warrant, to those parts which pertain to the people, according to tho norm laid down in Art. 36 of this Constitution.

Nevertheless steps should be taken so that the faithful may also be able to say or to sing together in Latin those parts of the Ordinary of the Mass which pertain to them.
And wherever a more extended use of the mother tongue within the Mass appears desirable, the regulation laid down in Art. 40 of this Constitution is to be observed.

55. That more perfect form of participation in the Mass whereby the faithful, after the priest's communion, receive the Lord's body from the same sacrifice, is strongly commended.
The dogmatic principles which were laid down by the Council of Trent remaining intact [40], communion under both kinds may be granted when the bishops think fit, not only to clerics and religious, but also to the laity, in cases to be determined by the Apostolic See, as, for instance, to the newly ordained in the Mass of their sacred ordination, to the newly professed in the Mass of their religious profession, and to the newly baptized in the Mass which follows their baptism.

56. The two parts which, in a certain sense, go to make up the Mass, namely, the liturgy of the word and the eucharistic liturgy, are so closely connected with each other that they form but one single act of worship. Accordingly this sacred Synod strongly urges pastors of souls that, when instructing the faithful, they insistently teach them to take their part in the entire Mass, especially on Sundays and feasts of obligation.

57. 1. Concelebration, whereby the unity of the priesthood is appropriately manifested, has remained in use to this day in the Church both in the east and in the west. For this reason it has seemed good to the Council to extend permission for concelebration to the following cases:
1.
a) on the Thursday of the Lord's Supper, not only at the Mass of the Chrism, but also at the evening Mass.
b) at Masses during councils, bishops' conferences, and synods;
c) at the Mass for the blessing of an abbot.

2. Also, with permission of the ordinary, to whom it belongs to decide whether concelebration is opportune:
a) at conventual Mass, and at the principle Mass in churches when the needs of the faithful do not require that all priests available should celebrate individually;
b) at Masses celebrated at any kind of priests' meetings, whether the priests be secular clergy or religious.

2.
1. The regulation, however, of the discipline of con-celebration in the diocese pertains to the bishop.
2. Nevertheless, each priest shall always retain his right to celebrate Mass individually, though not at the same time in the same church as a concelebrated Mass, nor on Thursday of the Lord's Supper.

58. A new rite for concelebration is to be drawn up and inserted into the Pontifical and into the Roman Missal.
Posted by Fr. Allan J. McDonald at Friday, December 23, 2011

At the most recent USCCB General meeting, Bishop James Conley, currently Apostolic Administrator of the Archdiocese of Denver, asked why the full Latin texts were not in the new Roman Missal.

The answer: Since the Roman Missal in Latin, "the editio typica," does not contain such an appendix, one could not be added to a translation of the missal into English or any other language.

The summary is great, but in my opinion, the damage stems from the liberal application of articles 37-40, which in context appear to have been intended for mission lands, to the U.S.

Despite the strong recommendation by our parish catechists to RCIA students to read the documents, I am confident that few if any of the aforesaid catechists have done so.