UPDATED PICTURES! THE MAGIC OF GOING BACK IN TIME VIA THE INTERNET AND GETTING ACCURATE DATA AND IMPRESSIONS ABOUT WHAT HAPPENED TO THE POST VATICAN II CHURCH 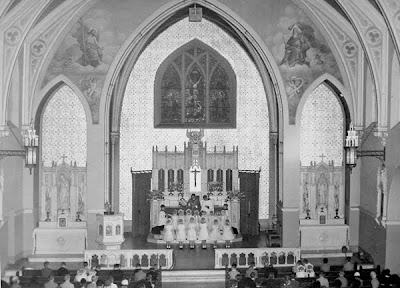 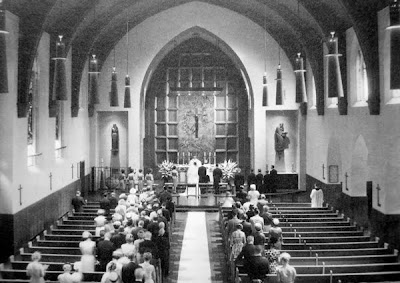 This is how this very same church looks today! Yes, it is the same church, compare it to the first picture prior to any renovation and then please note the latest take on the sanctuary. The recent pictures make the Church look like a tiny chapel, the original picture makes the Church look like a basilica. Was it just the camera lens? Or did the original design strive for grandeur through optical illusion? Was that grandeur compromised in all the subsequent renovations:
I suspect this is a Rambusch renovation which is how they did things in the late 1970's with the altar, ambo and priest's chair configuration. This is exactly how we renovated St. Teresa's Church in Albany, Georgia in 1981 and we had Rambusch as our liturgical designer However, they did return the arches to the side chapels areas which were squared off in the 1950's renovation. Rambusch was/is famous for their lighting and they did not like hanging chandeliers, so please note the 1950's new hanging chandeliers are removed in favor of recessed lighting which opens the space above the pews which I like. 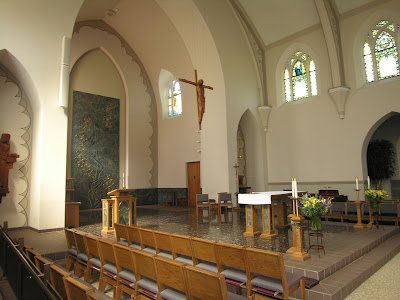 So... This proves that poor renovations were happening before the Council as well... From what I understand, the liturgical movement that culminated in the Protestantizing of the Mass in the wake of the Council started as early as the late 1800s, around the time of the proliferation of the Modernist heresy in German and French seminaries.

It is really not surprising that these sorts of renovations were already taking place even by priests who had perhaps bought into these erroneous ideas on a good faith basis (easy enough to understand considering we have many priests in the same situation today). In other words, this liturgical movement didn't just start at the Council, it was well thought out and planned in advance. Does anyone really believe it was an accident that occurred in the wake of Vatican II?

So the "pioneer" took a work of art and stripped it of it's beautiful paintings, marble altar rails, marble altars, replaced it with bare walls, a wooden sanctuary, and gave us a cranmer table. Well at least he "asked permission" first.

But we're supposed to think better of him because he recoiled at the damage he helped bring about?

I'd have thought better of him if he died defending what he was passed down.

The older picture seems to emit light (white and gold come to mind with the gold leaf and marble) from its backdrop and has fine details. Notice the stained glass window depicting the Crucifixion over the altar and the paintings near the ceiling.

The later picture, while not terrible, has a darker, more stark appearance. Its as if the hope for Light in the world has been dimmed. Heaven seems more distant.

It is really amazing that this renovation took place in the 1950's. The before shows the unity of architecture and art and the after shows something imposed on the architecture that doesn't go with it. Yes, stark is the word and not as heavenly. I can only imagine how the parishioners of that time must have felt.

The before image doesn't show much of the pews, but if the pattern it does show is consistent, then it appears that attendance was a good deal better before than after.

He should have left it alone!

I don't think it is prudent to comment on attendance pre/post renovations in this photo. The pre-renovation appears to be from a First Communion, which would naturally have more people, than say, the wedding which appears to be occurring in the post-renovation picture.

A few points for everyone. First, despite what happened later, anyone who studies the liturgical movement will discover that they were mass-sacrifice oriented, with the altar as their focal point. That is why they wanted only one altar (no side altars)and have that altar set up so that mass could be towards the people, the people for whom the sacrifice was being offered. Read the facts. The best academic history is Alcuin Reid's The Organic Development of the Liturgy. The best contemporary history is Gerald Ellard's 1956 book The Mass in Transition.

Next, these renovations, regrettable as they were, were born of a desire to allow people to breath in the spirit of modern architecture, which was in vogue in those days, just as people breathed in the spirit of baroque, gothic, etc. I would suggest reading the chapter "New Architecture" in Ellard's book, which gives us the Fulda Directives for Building a Church, which were published in English in Worship (Oratre Fratres) in December 1949, and thus widely disseminated across America.

You could also point the finger directly at H,.A. Reinhold who gave famous lectures on Church architecture at Notre Dame in 1947 and 1952.

Please note the beautiful paintings above the side altars. This was common in the late 19th and early 20th century for a church to do this, if they could afford this. Yet, I have seen all too many cases of this at being painted over from the 1930s to the 1980s.

It would be interesting if someone could find pictures of what this church looks like today.

The updated photos look worse. The Cross is off the the side, and the tabernacle hidden. It would only have a religious appearance when the priest is in the picture.....

James, I do connect with one statement you made: it allowed the people to breathe in the architecture of that period. I concur that it allowed the leadership to breathe it in, but I think the people were taught what to expect. We have torn down most of the ball parks of that same era due to their poor design and ubiquitous tri-level ranch home is considered dated.


Surely there are more modern forms of the Cross we could find? Perhaps some historical research to it's true form. Or perhaps we can realise the purpose of a symbol and of iconic form.

Maybe sheer coincidence but with each renovation I notice less people, until the shot is empty, devoid of people.