CONTRARY TO MY PREVIOUS CATECHESIS, IF YOU CAN HEAR, FOLLOW THE MASS TOO WITH YOUR PRAYER MISSAL OR MISSALETTE! 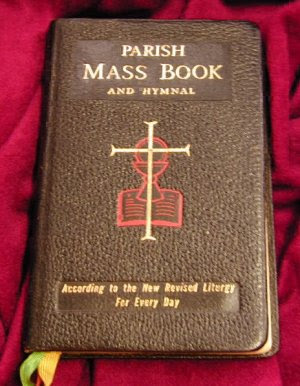 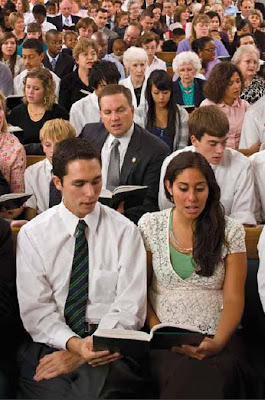 I used to teach people about their participation in the Mass that they should NOT follow the Mass in their missal as the Mass is meant to be watched with one's eyes. Unlike the EF Mass where you need the missal for the English translation, you don't for the vernacular OF Mass which then frees you from following in the missalette.

But those professional liturgists of the 1970's who were trying to deconstruct and re-imagine the Catholic Church wanted a more spontaneous, homegrown, inculturated Mass. So priests were encouraged to ad lib and make up their own prayers or fiddle with this, that or the other, despite the very strict prohibition of that from the documents of Vatican II and subsequent authoritative prohibitions.

So taking away worship aids that have all the prayers of the Mass in them was like the frog in the crock pot, before he knew it he was cooked, but didn't realize it was happening. The same with the laity, before they knew it, they thought all the changes that the lectors were making to masculine imagery in the scriptures were official as well as the ad libs of the deacons and priests.

I use to teach that only those who who couldn't hear or understand because of the loss of hearing or bad acoustics should use a worship aid to follow the Mass.

But now I say that if one can hear, all the more reason to follow along so as to expect and demand the Liturgy of the Church, not anything the lector, deacon or priest makes up.

We should all expect everyone, clergy and laity alike, to "Say the Black and Do the Red!"

Now, changing gears only slightly, Did you know that there was a 1998 revision of the Roman Mass that was rejected by the Vatican after it was approved by English speaking bishops? And that rejection led to Liturgiam Authenticum which asked that a dynamic literal approach be taken in translating the Mass from the official Latin into vernacular languages? The 1998 while better than the 1970 translation was still more of the same and even tinkered with the order of the Mass for English speaking Catholics, a tinkering that wasn't in the official Latin Missal. In addition to that, the 1998 missal continued the now defunct "alternative" choice for the opening collect, all of which were new compositions not in the official Latin text. This was allowed for the 1970 sacramentary in English and for the proposed 1998 one, but forbidden by Liturgiam Authenticum.

Here's an example of what could have been prayed the First Sunday of Advent as an alternative opening Collect if the 1998 missal had been approved for official use by the Vatican. What do you think?

Above the clamor of our violence
your Word of truth resounds,
O God of majesty and power.
Over the nations enshrouded in despair
your justice dawns.

Grant your household
a discerning spirit and a watchful eye
to perceive the hour in which we live.
Hasten the advent of that Day
when the weapons of war shall be banished,
our deeds of darkness cast off,
and all your scattered children gathered into one.

We ask this through him whose coming is certain,
whose Day draws near:
your Son, our Lord Jesus Christ,
who lives and reigns with you and the Holy Spirit,
one God, for ever and ever.

In inverse order: that prayer seems more like it would be for the Prayer of the Faithful/Universal Prayer. As far as following versus reading: I like to follow, watching, I feel like I am participating. If I can read the relevant prayers etc ahead of time this is easier. Following along can be a little tough if I get lost in the missal flipping back and forth.

This reminded me of a quote from Pop St Pius X where he said the Mass is a prayer and follow with the eye, heart, and mouth to hear it as it should be. This seems to imply we should not read, but I think it, instead, confirms what you are saying Father, that we should read the prayers as they are read allowed, respond, etc. Proper inflection and pacing can make the words jump off the page for you.

Following along in the missal is great for non-Catholics. It is the best introduction to the Mass.
I'm glad its there.

And many at Pray Tell have complained that the current collects are too long!

I was in a parish three years ago where the visiting priest stood up in front of us, and told us to not to use our missalettes. He then said this is what should be done with the missalettes -- he threw it in the garbage! He had a garbage pail (It was green for ordinary time, but maybe that was a coincidence!)placed next to the altar. Everybody but me put their missalettes down. Following the mass in the missalette, He then shut his altar missal. I noticed that we had an entirely new Eucharistic prayer, collect, prayer over the gifts, etc. But the irony is rich -- the missalette he threw out was "Celebrating the Eucharist" from the Liturgical Press of St. John's Abbey, where Father Ruff resides!

For the Ordinary form, I have the new Midwest Theological Forum missal, and it has everything you need. IT also has the Latin of the ordinary of the mass.