SOMETIMES 1960'S HIP THEOLOGY JUST CAN'T BE RECAPTURED AND WHEN YOU TRY IT IS SAD, NOT FUNNY 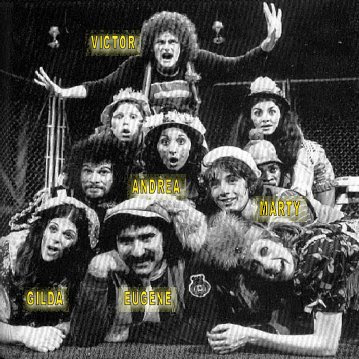 When I was in the seminary in the 1970's Godspell was still popular and we were being taught that any masculine pronouns to describe God or common humanity (man) were forbidden and in an infallible way, even as it concerns proper English grammar. We were to change these horrible masculine terms for God and neuter them.

The National Catholic Reporter has a review on the revival of Godspell on Broadway. The reviewer is not kind and in the following paragraph seems to get it right:

“Godspell” is showing its age, at least as represented by director Daniel Goldstein’s production at New York’s Circle in the Square Theatre. This first Broadway revival of the beloved 1971 “rock musical” might be compared to a middle-aged person trying to recapture youth. In people the result is sad to see, but here it’s just boring."

But then she goes off in the caricature she decries and laments that masculine terms for God were NOT neutered among other aging hippie concerns of certain Catholics of a certain age today.

It reminded me of Robert Kumpel's comments on the previous post:

The biggest enemies of the return to tradition are aging Catholics. They cannot let go of their 60's and 70's mentality and seem to believe that the only true tradition is the "revolution" imposed upon us in 1970. Strangely, it is younger people who are more disposed and open to tradition and open to the new translation of the Mass.

Why can't the older people have more respect for THEIR elders, namely the Holy Father and the Fathers of the Church?

I think we are seeing the wacked out 60's movement of aging priests, religious and laity staging their final attack against those who dare to call them to task for their novelty and 60's "do your own thing" generation which came to be called the "me generation."

Isn't it time to move on. As hard as it was to say goodbye to Bob Barker on the Price is Right, good old Drew Carey is carrying on (no pun intended) just fine.

The fact of the matter is that we have moved on and those who are still chanting Godspell songs are the caricature of the NCR article above of these oldsters trying to recapture their lost youth and theology.
Posted by Fr. Allan J. McDonald at Saturday, December 10, 2011

I was born in 1962. I was 9 when Godspell came out on Broadway. I was old enough to think it was crap then, just as I was old enough to think my 19 year old Cousin climbing into a Vw Microbus with her fringed leather jacket and heading out west with her hair banded friends was likewise a load of crap. I hated growing up in the 1970s. I'd have traded to be a child of the depression any day. Hell, being a Roman Slave would have probably been better than being a child in the 1970s.

I never did 'get' Godspell. The characters seemed to be trying to get my attention and I was not sure why. Irritating.

We have an adult server who uses 'gender neutral' forms of prayers and such. Loudly. I don't know why it bothers me so much. But I sometimes want to ask him if Christ's use of the masculine pronoun was an error and punch him in the mouth if he says 'yes'. But I don't.

Counting down to the move....

We had a religious sister from another parish who would come to our daily Mass and do the same thing and as loudly as she could. Obnoxious!

I can only imagine what you must have thought when the local high school preformed Godspell a few years back....

I was born in 1948, and I knew people in the Toronto company of Godspell in 1972. That said, while it seemed novel then, it was really pretty thin stuff.

I have been told by our local catechists that the Latin Mass was not taken away. I can forgive them the delusion, as they had not yet converted to Catholicism, and are simply spouting propaganda received from someone else. The Latin Mass was most assuredly made to disappear, and I will resent that as long as I live. It is a sad statement to make that in the Archdiocese of Atlanta, the Latin Mass exists only at the FSSP parish in Mableton, and at the SSPX chapel in Roswell. Beyond sad.

I deliberately never saw Godspell or Superstar or any of those bovine by-products. I consider it at least a venial sin to even watch that nomsense. Talk about pornography...I'd feel less guilty watching, "Lindsay Lohan Meets Paris Hilton on the Planet of the Amazons." And, no, RCG, I don't have a copy of the movie to send you...LOL!

I never saw Godspell either. I tried to watch Jesus Christ Superstar once on TV several years back and I couldn't stomach it. About the only thing in the happy/peppy/hippy/religious musical genre that I've watched all the way through was a live performance of "Joseph and the Amazing Technicolor Dreamcoat" sometime around 1990. A girl I knew bought the tickets as a "surprise" for me, so I had to pretend that I liked it.

Another two hours I'll never get back.

I watched, "The Last Temptation of Christ," because a friend said "it was great." I called him after and told him that the movie was wrong. The last temptation of Christ was to come down here and physically whup the author, director, producer, and cast before turning everyone who watched it to stone.

*Barbara Heshey was hot, however* Christ have mercy!

Worse thing for me was that we'd sing the entire Godspell soundtrack at our masses. I'm a catholic high school teacher now and every year some catholic school has to put on a dopey version of that play. The guy who wrote the lyrics, Stephen Schwartz, also wrote the words to that other travesty of the age, Leonard bernstein's Mass. When I first heard a Mass by Palestrina while in college, I thought I died and gone to heaven.