WHAT IS ACCOMPLISHED WITH THESE RENOVATIONS, ONE MINOR ONE MAJOR

The first three pictures are the Basilica of Our Lady of Sorrows in Chicago as it looks today or at least recently. This is the very same church in which the 1941 Solemn High Mass "Dance" was filmed. It hasn't changed much except for the addition of a post-Vatican II altar that in no way compares to the Pre-Vatican II altar or fits with the grand architecture of the this basilica, but at least the old altar wasn't ripped out: 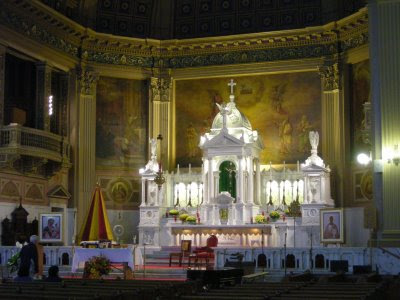 Please note where the new altar is, not in the sanctuary but in the nave and not very well thought out and the pews triangulated around it. At least the old sanctuary was not tampered with nor the magnificent high altar, so theoretically it could be easily restored. What does doing this to a Church like this imply in the minds of the people who attend Mass? Once the Mass was majestic and celebrated on the High Altar, now it is pedestrian and celebrated in a less than dignified position. What comparisons can we make between the old and new altars? What does it imply about the Mass and our attitude toward it? 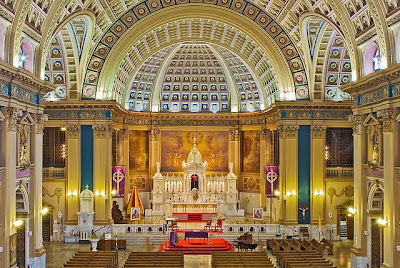 An earlier attempt at post-Vatican II insights for the Liturgy 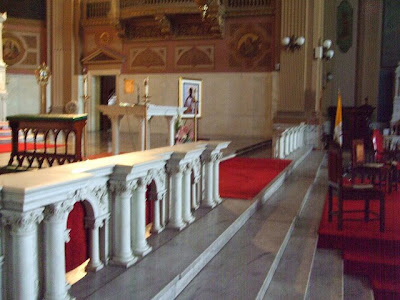 How not to renovate a traditional Church--what did this renovation accomplish? I don't know where this church is and what they did with the original sanctuary, it could still be there behind this ugly altar arrangement: 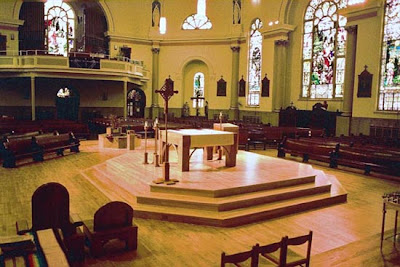 Some of these renovations simply leave me speechless. What on earth could they have been thinking?

Desecration is a better word for this than renovation. Granting them good intent strains my sense of charity to the limit.

Now this is something that justifies the death penalty in my book.

This is where the "give the money to the poor, it would be to a better use" statement is most appropriate. Wasting money on perfectly good Sanctuaries while Vat II demanded that Altars of artistic merit should be respected and taken care of, not ripped out. All parishoners who read this blog from out of state or neighboring parishes should start the process of asking for a Restoration of what was removed when a truly awful Sanctuary is what has been left in its' place. Time to undo some of the damage done. Sugarland a prime example. Those folk should be proud..