Two days ago I received my new iPhone. It has a feature on it of various clocks that you can set for various countries. So I set it for Halifax, the time of my relatives in Judique. I have a cousin in London, so I set one for London time and I have all my Italian relatives in Livorno so I set one for Rome's time. I thought to myself now I'll know what time it is in Italy all the time at the touch of a virtual button!

No sooner had I completed this, I went to check my emails and a cousin I do not know in Livorno emailed me that they had just found my my email address and wanted to update me. This cousin speaks and writes English very well whereas most of my relatives there do not speak English at all.

I've been filled in on so many things that I did not know about my mother's side of the family and her parents. My grandparents on both my father and mother's side were dead before I was born, so I've always wondered about them and in a sense have always grieved over not having known them, kind of like an orphan who never knew his parents, although not as dramatic as that of course.

At any rate, I received by email this morning these pictures. One that I have seen all my life of my mother's parents which she has on her night stand which is in a frame and a bit more doctored up than the original below which I've never seen and then another one of them outside which I've never seen and then a picture of my mother, and her two sisters at lunch at my aunt's apartment in Livorno outside on their back porch. this was taken in July of 1981 or 82 when for the first time since 1956 I went back to Italy with my mother and visited Livorno for the first time. I am out of the camera's range, but my Zia Angiolina is serving my mother some Parmigiano on her pasta, and my other Zia Asuntina is standing and my mother is on the right sitting. The only aunt I really knew was Zia Asuntina (Tina) who immigrated to Chicago with her daughter in the late 1950's and would visit us frequently in Georgia and we would go frequently to Chicago to visit them. Going to Chicago to visit them was like going to Italy for me. All their friends were Italian and everyone spoke Italian all the time.

My Zia Angiolina made some of the most wonderful meals while I was there including seafood that I had never had since Georgia two hours away from the coast doesn't have the same type of seafood as Livorno right on the Mediterranean.

I often wonder what my life would be like today if we had stayed in Italy. I grieve over that too. 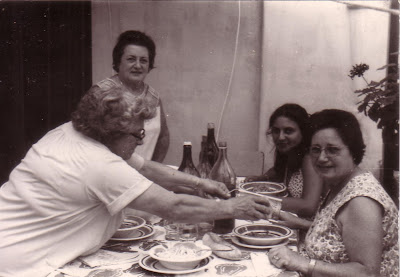 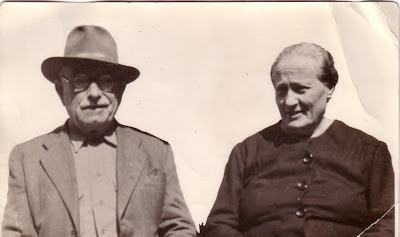 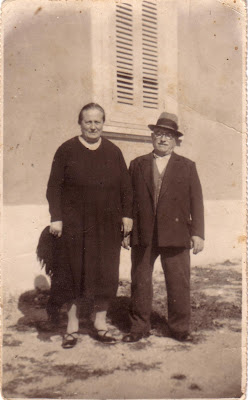 I like old pictures--they often show life the way I wish it could still be!

As for me, I grieve over the fact that most men don't own or wear real dress hats anymore (such as your grandfather wore)This was another cultural loss of the post-World War II period which culminated in the 1960's after which only our grandfather's generation continued to wear hats.

When I am dressed in my coat and tie professional wear (or "Sunday best") I still wear felt dress hats (or straw in the summer). Unfortunately, they are hard to find and try on locally and I now order them over the internet.

This is like finding treasure, isn't it? It is interesting how many people I know that have Italian heritage have family in Italy they remain actively in contact with. Even when it is a person who was born in the USA. It is a great source of happiness for them.

It's OK to grieve over those things, but think of all the people you know who you wouldn't have if you had grown up in Italy.

I know it still would not have been a perfect world, but it would have to be better than it is now!

A few months ago I visited the parish in Washington, Georgia where I was confirmed. While visiting I began having those "what may have been feelings" since my life radically changed three months after my confirmation. I wrote these words while praying at the church:


Weep for lost memories that never were.
Weep for that which never was.
Mourn the memories you do not possess.
Mourn the present moment that was not willed to be.

I am second generation Italian (Sicilian actually since in my family we always made that distinction), so my parents (on both sides) experienced much of what you have gone through Father. I know in my early life, growing up was vey much about "La Famiglia". All of my Aunts and Uncles were within 20 minutes of our house, and weekends, holidays, birthdays, etc were always spent with Family. We had friends of course, but celebration meant family, and Family meant food. I can see those tables (plywood spread on saw horses) stretching through the dining room into the living room, with 70 relatives seated around them; or in the summer months, spread out in the yard underneath an awning. My (Irish) wife's first experience with this was a 5 hour affair where she kept thinking it was over, only to have me tell her "not yet" many times over.

My sister has been back "home" to Sicily with my Mother and Grandmother, and I wish I had that opportunity, but both are now deceased, and my Father's family sadly lost though ties after the war. So I am an American now, with a few Sicilian Traditions, no doubt much "Anglesized" but clung to and being passed on to my children.

We can not choose how and where life will take us, but we can keep these traditions alive, becasue who we are, adn where we came from, is important. In the Family certainly, but in the Church too.

Well Father, I have no Italian ancestors, but I used to live in San Diego's Little Italy. It was such a lively place and our parish was full of love. Everyone had "old country" photos and there was lots of colorful ethnic diversity--something I miss a great deal since moving to Elvis Country. You've made me homesick too for my old country.

Reading the comments got me thinking...
Interesting, I think, how the Lord uses the holes in our lives to spur us along and push us forward and closer to Him.
If we had those missing parts of our lives, would we have been motivated to get to where we are now?
In our weakness is our strength.
I don't personally know many 'personal stories' of priests and religious, but from the little bit I do know I am beginning to wonder if there aren't a LOT of them who have suffered a great deal in the pre-religious life. Those who basically had the picture perfect life may be the exception rather than the rule.
Which gives Hope to us...that holiness is not only for the 'pretty people' who have got it all together.

The one down side of being truly 'American' is the void of cultural richness and close family ties. This is the lament of 2nd/3rd generation immigrants...so much assimilation that cultural identity and it's supporting family sturctures are lost into the melding of the melting pot. Sometimes the expression 'when in Rome do as the Romans do ' is taken too far.
Thank God for a Catholic Identity...and for the Head of the Church, Jesus Christ, who won't let His Church be assimilted into the culture of the times...rather His Church affects/influences the surrounding cultures of the world. (Sometimes more than other times)Hmmm...perhaps a way of life to emmulate. ...Remain steady as the Church and let the undulations of ever-changing cultural mood swings pass on by.

So, here's to Grandparents we never knew, things that never happened, and to never-changing Holy Mother Church!
~SqueekerLamb

It is sad, and perhaps even a "Downside" of being American, but although I regret what I have lost I would not want it any other way. America must strip off the cultural identities of it's immigrants and make them American. The trend over the past 50 years to allow immigrants to become hypenated Americans actually works against the notion of the melting pot and undermines America. Hold on to your family traditions of course, but at the family level. At the National level, be American or be gone. All else is the silliness of political correctness.

Most of my ancestors are Irish. My father's family is full of McBrides, McAfees, Hodges, and McWilliams. My mother's is full of Harrises and O'Callaghans. Most were Catholic, and many were members of St. Jo's in the early 1900's. I discovered this after I joined St. Jo's and did a little research. When I told Fr. about it, he said, "You see, your ancestors have been praying for you from Heaven." I believe he was correct.
My wife's family is full of Italians. Her family reunions up near Pittsburg look like the set of "The Godfather." The last time I was up there, one of the Irish faction piped up and said, "You know, I think time passes faster here than in other places." When asked why, he said, "Because every time you look out the window you see another Dago." It was all very good natured and, of course, precipitated a deluge of Irish bashing jokes. LOL!