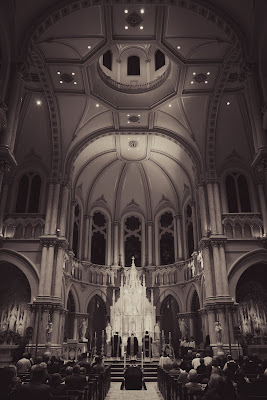 The Ordinary Form in English, Ad Orientem and with minor rubrical changes--the new missal for the future! 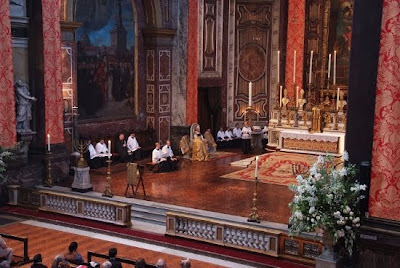 There is still some talk that one day we'll have a new Roman Missal that will be a combination of the 1962 missal and the revised post-Vatican II Missal in English.

I think this can be accomplished without changing anything in the 2011 missal except the placement of greetings and eliminating the other options for the penitential rite and sticking to the Confiteor. This revision would also re-complicate the rubrics and stick closer to the 1962 rubrics for the Mass.

Nothing else would have to be changed, i.e. Lectionary or its current rubrics for proclaiming the Scriptures, calendar or vestments.

The Mass is celebrated Ad Orientem

The priest goes to the foot of the altar. After the Entrance Chant is completed, facing the altar, He begins with the Sign of the Cross, and the sentence to acknowledge sins. There is a pause of silence and then all profoundly bow and pray the confiteor standing erect for the absolution with the sign of the cross made by all.

The priest ascends the altar for the Kyrie and when prescribed the Gloria from the middle of the altar. All make the sign of the Cross as the Gloria is concluded as in the EF Mass.

All are seated for the Liturgy of the Word as it is normally carried out in the OF Mass.

The priest goes to the middle of the altar for the Credo and genuflects at the words concerning the "Incarnation." All make the Sign of the Cross as the Credo concludes as in the EF Mass.

The Universal Prayer follows, either by the deacon, cantor or priest but with the priest at the middle of the altar. Afterwards the priest returns to the chair and the deacon or in his absence an adult acolyte or the priest himself prepares the altar.

The Offertory verse is sung and any other suitable anthem as the altar is prepared, the collection is taken. The priest returns to the sedalia and then receives the gifts of bread and wine and money as is currently done.

The priest prepares the gifts using the reformed offertory prayers as currently celebrated.

He turns for the Orate Frates and then back for the Prayer over the Offerings.

Then the Preface Dialogue, Preface and Eucharistic Prayer (any option) are prayed as usual.

The Sanctus is sung or said with all making the Sign of the Cross as the Benedictus part begins.

The only addition to the rubrics is the double genuflections for the consecrations, the use of the pall as prescribed in the EF Mass and genuflecting each time the pall is removed once the Precious Blood is consecrated. All the options for the Eucharistic Prayers are possible.

The Per Ipsum is as in the OF Mass, but the pall is removed, the priest genuflects, sings it, places the chalice on the altar, covers is and genuflects after the Great Amen is chanted.

The Communion Rite remains the same.

The Priest turns for the Pax Domini and asks all the exchange the Sign of Peace.

The Fraction Rite or Breaking of the Bread begins and the Agnus Dei is Sung. The priest prays his quiet prayers as usual.

After the Agnus Dei, the priest turns to the people for the "Behold the Lamb of God.." etc.

He turns back to receive Holy Communion himself as the Communion Chant is begun.

He distributes Holy Communion by intinction with the help of the deacon and others when necessary to those kneeling. The Common Chalice could be used for smaller congregations.

He returns to the altar, purifies the vessels, sits for silence and returns to the Altar, kisses it, turns to the people for the greeting and then goes to pray the Prayer after Holy Communion at the Epistle side of the Altar as he sings or says "Let us Pray" (the Missal is transferred during the silence after Communion).

He goes to the center of the Altar again, kisses it, turns to the People, greets them, blesses them and dismisses them or the deacon does. He descends the altar, turns to it to bow or genuflect and departs as the recessional hymn occurs.

The only other added rubric is that the priest kisses the altar each time he turns away from it to greet the people as in the EF Mass.

This is the OF Mass in the current corrected English, no changes but the rubrical ones I mention and the placement of the greetings.

My clairvoyant suggestions for a slightly revised OF Mass, using the brand new Corrected Roman Missal in English would not be a dramatic change, would still be the reformed Mass that was commissioned by Paul VI in light of Sacrosanctum Concilium of the Second Vatican Council.

In other words it is extremely faithful to what Vatican II actually asked for the reform of the Mass.

The only thing that is not completely faithful is the lack of specifics regarding the use of Latin. I like the corrected English and I'm not sure about mandating Latin, but if we did, I would recommend it for the Greetings, since these are easy to do, for the Sanctus and Agnus Dei only.

Of course, a parish could still have the option of doing the entire Mass in Latin if so desired or other parts, but the minimum would be the Greetings, Sanctus and Agnus Dei and the Kyrie should always be in Greek.
But I don't mind a completely English Mass in the least.

What do you think? Should I write the Pope with my recommendation? Of course not, he reads my blog daily!
Posted by Fr. Allan J. McDonald at Monday, December 05, 2011

Perhaps we apply Subsidiarity and have you request permission to do this from Bishop Harttmayer. From there the Pope can be so enthralled that he calls and talks to you about it and asks for you ideas on the Liturgy.

Father,
This sounds like it could be the final conclusion of the "Reform of the Reform." Of course, another option (probably not very likely) would be to simply go back to the EF but with the OF lectionary and with the option for the vernacular (something like the '65 Missal) I certainly hope something like one of these possibilities will be the final product--and hopefully during my lifetime!

You never know who reads a blog. A year or more ago I went to a chant workshop at Ave Maria University. Jeffrey Tucker spoke there and your blog was mentioned (I believe by Jeffrey during his talk) as one of the popular blogs with the "Reform of the Reform" movement. Several young men in their 20's seated near me (several were seminarians or planned to go to seminary)cheered when your name and blog was mentioned! Who knows, maybe you truly are clairvoyant and the Pope, Father Guido Marini, or maybe Cardinal Raymond Burke read your blog!

Sounds good. I wish we could use the high altar sometime, but it would be hard to see. What about more low church Catholics? I don't see them going Ad Orientem on their own. Would it be required or optional for them.

Ad Orientem or Facing the people would be options but using the so-called Benedictine Altar arrangement.

Joseph, all I can say is "YIKES!" That kind of stuff makes me very nervous because I still believe that all this virtual stuff is make-believe on my part and no one actually reads it and those who respond are just virtual responders. I prefer that!!

Something would need to change. The texts and prayers would need to be changed to match the EF. The OF text and prayers are often abrievated versions of the prayers in the EF (example: the Confiteor is quite different).

is it possible when the priest and servers come to the altar to begin at the foot of the altar isn't there a rubric of going to the sedilia to begin the sign of the cross? maybe I'm off....when could the asperges be worked in?

this might be of interest to you. Here is order of Mass (1970) from an Austrian parish: http://www.pitzinger.at/pk/aktuelles.html

interestingly they use the 1965 ORDO MISSAE for the Extraordinary Form.

here is the order of Mass for their Sunday German Mass:

For singing Alleluia, and Gospel: Stand

Incensing of the faithful: standing

at the preface: standing

during the Eucharistic Prayer (Canon): Kneel

(at least before the conversion to the Lord's Prayer)

The Lord's Prayer: Are

For the Lamb of God '; knees

During the Communion chalice and cleaning: Kneel or sit (at least during the personal thanksgiving)

at the closing prayer: standing

To Go in peace;: standing

The communicant comes to center of aisle genuflects then goes to the communion rail, one can communicate either kneeling or standing, on the tongue or in the hand. He or she responds to the priest who says, "the body of Christ," with " Amen." after genuflecting one goes back to the pew.