(Below the picture, there are two links you can click to learn more.)
When I was in the seminary in Baltimore, Maryland at St. Mary's Seminary and University between 1976 and 1980, I use to see these nuns around town. In fact I saw two of them by the Basilica in the 1970's where on November 1st just a few days ago they were received and acknowledged as a Roman Catholic Priory. They had been received into the Full Communion of the Church about two years ago.

I was familiar with Episcopal nuns as there is a small convent in Augusta, Georgia. I use to trespass on their property as a child and the nuns threatened us that they'd call the police for us trespassing!

Years later, like 30 or so, I became pastor of the Church of the Most Holy Trinity in Augusta in 1991 and there was this Episcopal Nun who came to our Saturday Vigil Mass. In fact, she was the nun who 30 years earlier threatened my friends and me with being arrested as children for trespassing, (a bit of hyperbole). I thought she was still gunning for me all these years later.

Well to make a long story short, Sister Clare came into the Full Communion of the Church around 2003 I think as I received her. She lived to be 102 years old, so I think she was about 97 when I received her. However, her good Episcopal sisters allowed her to remain in the convent until her death as a Catholic Episcopal Nun. They all came to her funeral at the Church of the Most Holy Trinity which I celebrated.

But back to the Baltimore nuns, I can remember the Catholic sisters in Baltimore mocking these nuns as they never changed their habit or got rid of them for street clothes. Can you imagine this picture if they were all in short cropped hair and frumpy clothes? It just wouldn't make the same impression would it? It would make us sad! They have a wonderful convent/monastery/priory in Catonsville, Maryland a suburb of Baltimore. I think it is All Saints' Convent, thus the reason they were officially "Prioritized" (get the pun? he, he!) on All Saints Day. It was a cool place even as an Episcopal Convent. 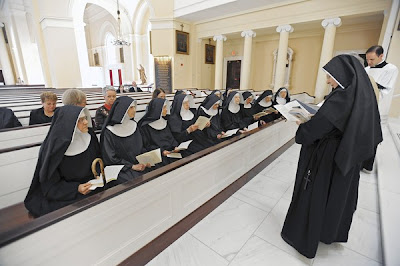 Read the story by pressing this sentence!
ALL SAINTS SISTERS OF THE POOR, A ROMAN CATHOLIC COMMUNITY OF SISTERS FORMERLY EPISCOPAL!
Posted by Fr. Allan J. McDonald at Wednesday, November 09, 2011

Just think: No one needs to tell us they're nuns. What a concept!

God works in mysterious ways! I hope their example helps to lead others home to Rome. Beautiful!