SINNERS IN THE HANDS OF AN ANGRY GOD AND ONCE SAVED ALWAYS SAVED, I'LL TAKE THE LATTER, WITH CREAM AND SUGAR PLEASE 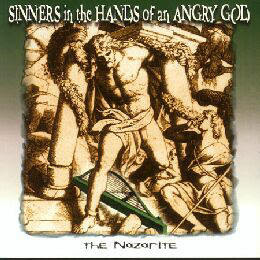 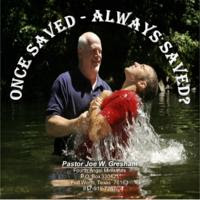 My comments first: As a Catholic growing up in the Bible Belt and with Southern Baptists and Presbyterians in particular, I certainly have been influenced by Calvinism. It's part of the southern culture of religion and you almost breathe it in. There are some aspects of it I like that appeal to the Jansenism that many Irish-American Catholics were dished by a predominantly Irish Church in America. But what really intrigued me was "Once saved, always saved." That would reduce a great deal of Catholic anxiety about salvation if only it were true. But is it? I fret so much! But Carol's comment on the Four Last Things and Pinanv525 response to hers I find fascinating. PINANV525 is a former Presbyterian Minister and member of St. Joseph Church in Macon now.

When I lived in Dayton, Ohio, my parish priest said that if anyone truly understood how horrible the effects of their sins were, they would never commit any. He then went on to say that this proves our ignorance and therefore mortal sin is impossible. Nobody commits mortal sin, so everyone will go to heaven.

He then began a building renovation campaign, removed the tabernacle from front and center and hid it behind a glass block wall, and removed the pews-replacing them with interlocking chairs. He said the church should resemble a tea-house, and feel empty when no people are inside. He told us that we were no longer allowed to kneel for the consecration, and that we had to stand for all of the kneeling parts- even after receiving communion.

I thank God for EWTN because they educated me in the true faith. My family left that parish and found one that preached the truth.

Please pray for the ignorant victims who fall prey to false teaching, and also for the false teachers, that Christ shine his light upon them so they see their errors. Maybe if they receive this grace they, like St Paul, will spend the rest of their lives proclaiming the true gospel.

It is really only a short step,theologically, from "Sinners in the Hands of an Angry God" to the neo-protestant "universal salvation" of Carol's misguided and heretical pastor. The protestant (and post Vat II for some Catholics) view of sin, embodied in its purest form in Calvin's doctrine of "Total Depravity," was intended to emphasize the overpowering triumph of Christ's Grace. The blacker and more hopeless our sinfulness, all the more marvelous is Christ's mercy. Only the terrible Sovereignty of a wrathful God is powerful enough, through the loving and redeeming Son, to save sinners in bondage to the power of evil. This, of course, leads to Calvin's doctrines of "Unconditional Salvation and Irresistible Grace;" God must do it all...we can do nothing because we are so mired in sin there is nothing left of God's Image in us.

There is no distinction, in Protestantism, between venial and mortal sin; theologically, stealing a piece of bubble gum is as much a stain on God's Holiness as murder. All sin, however small, is a violation of the Righteousness of God. So, the logic of such thinking leads, ultimately, to just the kind of mentality Carol is reacting to in her Priest...universalism. (Calvin, perhaps seeing this coming, could only avoid it with his misunderstood and extreme view of Predestination.)
Interestingly, this theology of Universalism plays right into the hands of the secular, egalitarian mindset and is what has led to such things as trying to normalize homosexuality and gay marriage, defending abortion, cultural and moral "equivalence," and a hatred for authoritarianism and traditionalism in any form...especially something as outrageous as the EF and all it implies theologically.

This is a part of the reason I became a Catholic; the fruits of Protestantism are a clear indication of its error and continuing degeneration. We cannot allow this to happen in the Catholic Church...God will not allow it as long as we are faithful. Go to Confession! Go to Mass! Christ have mercy!
Posted by Fr. Allan J. McDonald at Saturday, November 12, 2011

Dang, I attended that same mass and parish as Carol. I even recall that homily. I did not interpret it exactly the same way, for, IIRC, the Priest, Fr. P. was explaining that there were theologians who had put forth such a concept, but that he did not agree. As for the renovation of the church, I was there for all of that, too. It was done under the guidance of a nun from the Archdiocese. I was on the Parish Council at the time, and was a little perplexed by the changes, but they were monitored by the Archbishop. I even recall the discussion of the disposition of the Tabernacle. The glass wall is the left transept as you face the alter. It is now a sort of small chapel area. The right has our carving of the Pieta in a similar reflective setting.

The church building dates to 1959 and has what I call the Jetson's look of that era. The postures for the service, i,e, standing through communion, were at the direction of the Archdiocese. I know that Fr P. was quite passionate about the service being 'accessible' to the physically handicapped. This posture was intended to prevent the lame from feeling bad about not being able to kneel. As you may recall, we also replaced the pews with interlocking chairs.

I have attended several other parishes in the area and, for one reason or another, they are no better, and in many important ways, worse. I have been attending the Latin Mass at Holy Family and feel that my family is likely to move in the near future.

In this particular case it seems the divergence came from the Archdiocese. We have a new AB, as you know. I am not certain where he stands on these matters.

I was a sponsor for someone in RCIA, and the DRE and a few other women were giddy over the fact that Fr. P. would go along with their every whim. They were members of a radical women's group, and would attend conventions where they would learn the next steps on pushing their agenda in their parishes. When I mentioned to them that it is proper to kneel for communion in the US, they said "Well we are going to stand whether it is allowed or not. When they realize that they can't stop us, the vatican will come around and allow it- that's what we did with the alter girls". [Lots of laughter]

They also bragged that the bishop was on their side. That apparently was true. When Pope Benedict XVI visited the US, he made a comment that he knew Bishop P very well, from opposing points of view. The gatherred bishops had a good laugh over that.

I am glad that I am no longer in Ohio. St Joseph in Macon is a breath of fresh air. EWTN is only 5-6 hours away by car. You can wish someone a blessed day, and they will smile and thank you for it. We have many good priests here and some have studied in Rome. I finally feel like I am home.

So, RCG, are you excusing, defending, pondering, or merely attempting to find safe ground? LOL!

That's an interesting clarification that perhaps mitigates the guilt of the priest who preached that homily and made those renovations. However, Carol's story is a textbook example of what's wrong in too many dioceses and parishes today. And it seems that the more the Holy Father does to eradicate this kind of rot, the more its perpetrators entrench themselves in this pseudo-church they have created. Living in the deep south, it is very tempting for Catholics who want to "get along" with their Protestant neighbors to try to blur the lines that separate us, but we cannot compromise the truths of our faith--or at least we shouldn't.

Carol, yes, the RCIA has been particularly painful. I was asked to sponsor an individual some time ago. They let me know they were reluctant to ask me, but they didn't have enough sponsors. This is in a parish with almost 1000 families. They rarely used actual catechism sources or teachings from church sources, but rather used 'stories' from various writers, one in particular I recall was actually pagan. We had one night where we went in the church and prayed after being given thoughts to ponder. I really liked that session. Later the head of the RE program told the group that session was her least favourite to which many of them agreed. The good news is that there were two tiny old ladies who have hard lives that went through that session and have stayed in the parish ever since. I keep their names in my pocket and remember them when I pray.

I think that era you recall was when one of music directors announced to world that he was gay and how he struggled with the Church teachings on that. He now leads a pretty much openly gay life, as does the fifth grade science teacher. I have to admit though that the guy has a great voice.

RCG, Why in the Hell don't you find another parish? There is no reason to put up with that kind of crap.

Pin, I wonder that nearly everyday. There are two reasons I have stayed this long. First, there are a lot of really nice people here. Second, and really the most important, is that when I reflect on my life sometimes I think about what, if anything I would change. What I find is that no matter how bad something was at the time I gained another thing I would not trade for the world. But now, these two reasons are beginning to converge. I cannot vote with my feet as I am in the middle of a Diocese that is in open revolt with the Church. So traveling is geographically too difficult. Fortunately, as God would have it, the Latin Mass Parish is combined with ours. I work in the parish Credit Union and the new arrangement has brought them to our door to get help. Maybe some of the other poor and hungry in our Parish will want to give it a try with me.

In reality, I would be happy with an OF Mass that stuck to the liturgy and a homily that didn't ignore or take issue with the Gospel reading (today we anguished over how poorly the wicked servant was treated). I am reaching a point where I have to struggle not to look for fault. That is a sin and will need its own confession. But a man should tend his going hence even as his coming hither. Ripeness, is all.

RCG, There will also be a lot of "really nice people" in Hell...

I pray for Priests who lead the Laity astray. They are condemned to a log stay in Purgatory for their own sins, and their culpability in the sins of others.

The Church needs more Priests like Father Rodriquez, who truly understands His faith.

The idea of Irish Jansenism is a myth. See here