Not our choir, but this will be sung tonight, but in a simpler fashion by our combined choirs under the direction of Nelda Chapman:

Gabriel Fauré composed his Requiem in D minor, Op. 48 between 1887 and 1890. This choral–orchestral setting of the Roman Catholic Mass for the Dead is the best known of his large works. The most famous movement is the soprano aria Pie Jesu. Camille Saint-Saëns said of it, "just as Mozart's is the only Ave verum Corpus, this is the only Pie Jesu."

Fauré's Requiem consists of seven movements which will be sung tonight as a part of the actual EF Requiem Mass with catafalque: 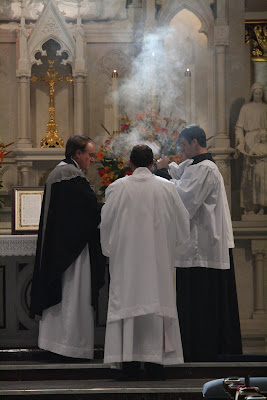 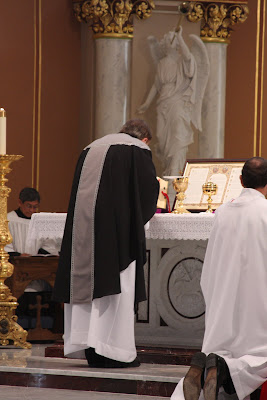 For me, the EF Requiem Mass is the most beautiful Mass of the year. It provides for us the best opportunity to perform our role as Laity and to pray for the relief of the Church Suffering. Having witnessed the Requiem Mass and compared it to the NO Funeral Masses I have attended I can not remotely concieve of being sent from this life in any other fashion.

In my Humble Opinion if the Church must choose between All Saints and All Souls as a day of Obligation All Souls would be the one I would obligate. All Saints is for us, who can still help ourselves, while All Souls are for those who can no longer help themselves.

I was just wondering this morning on the drive to work whether we now had the black vestments for the Deacon and Subdeacon (yes, I actually think about things like this). I'm looking forward to assisting at this Mass tonight for All Souls.

Father, I liked your explanation during the Homily during yesterday's Tridentine Mass. There were clearly some confused people who wandered into a Traditional Latin Mass! I pray many of them will return as it was quite a large turnout! My theory is that people often do not return to the Latin Mass because they become embarassed when they don't know what to do and they feel like people are looking at them and judging them. If only they knew that, unlike the OF, you really can do no wrong as there are no actual rubrics for the people - isn't that strange that the "rigid" Mass is more loose regarding the people and their participation!

Anyway, I hope your very kind and nicely worded explanation will relieve some of them and they will become regular Latin Mass attendees.

Templar - Agreed on all counts. Although it's not a Holy Day of Obligation, Holy Mother Church is definitely asking us to attend Mass today (or at least pray) by offering various ways to obtain Indulgences!

Apparently, there is a tradition in the Church of priests praying three consecutive (as in back-to-back-to-back) Masses on this day (this being special also in that priests cannot usually say 3 Masses in one day?). If you're looking for some blog post material today, Father, I'd like to know more about that. :-)