IT REALLY IS A SMALL WORLD AFTER ALL! 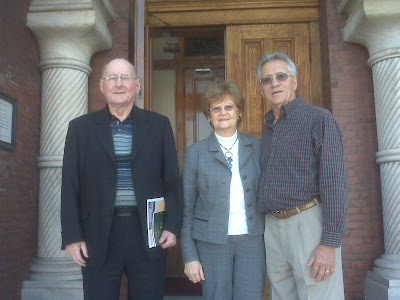 About two months ago my secretary told me I had a call from a "relative" who had called twice before but I was out. So I picked up the phone and this man said, "Hello, I'm Archbishop MacDonald." At first I thought it was a relative of mine being silly and I almost said to him, "Ya, sure!"

Fortunately I didn't for the man was Archbishop James MacDonald, the retired Archbishop of Saint John, Newfoundland. Prior to that he was the Bishop of Prince Edward Island, right next to Cape Breton, Nova Scotia and prior to that he had been an auxiliary bishop in Hamilton,Ontario. He started off as a Canadian Holy Cross Priest. He's now 86 years old and enjoying retirement.

He called to tell me he would be in Macon on November 2 and wanted to visit with me. I had a very nice visit with him yesterday here at St. Joseph.

He is very familiar with the little hamlet of Judique, Cape Breton where my father was born and reared. His mother was from there and she is related to my father's mother "Eliza McDougal." So we're distant cousins.

But the really odd thing is that about two weeks ago, he was celebrating Mass in Windsor, Ontario where he now lives and after Mass, an older couple introduced themselves to him. He asked where they were from and they said from Macon, Georgia. Astonished, he said that he was going to Macon in two weeks to see a relative of his. They asked what is his name?
Father Allan MacDonald he said. They answered astonished, "that's our pastor!"

In fact Marie and Harold Kelly told me about a month ago they were going to Canada. Marie is from there, in fact, an oddly enough again, from Prince Edward Island. They just happened to pick the Church where Archbishop MacDonald was celebrating Mass in Windsor!
Posted by Fr. Allan J. McDonald at Thursday, November 03, 2011

Gee Father, maybe he can give you some pointers for when you become a bishop!

What do you call that synchronicity, coincidence, luck, fate, divine intervention?

At least he was a bishop! The only person I know with the sam last name as mine is in prison for armed robbery.

I hope you told him you baptized a young man who is now been just formally accepted as a CSC Seminarian - talk about full circles! -pgal

when I stop and think about all the seminarians who are now priests who came through Augusta and Most Holy Trinity, I can't believe how bless I have been as a priest to witness that for I know that many other priests are no so privileged as I am in this regard! But, no I forgot to tell the Archbishop that, but I have his email and I will certainly do so.

Your ongoing prayers as well as those of His Excellency are much appreciated!

You are so right that MHT has had the blessing & charism of 'birthing' young men into the priesthood. Our experience in this journey, however, has also led us to notice that, in many cases, "you have not because you ask not"...
Our son is beginning his own journey in large part because of priests like yourself, Fr Brett Brannen, & Fr David Carter who have served not only as role models for young men, but also took the time to actually promote vocations. Sadly, this is not the case in so many places.

BTW - is your Archbishop CSC relative retired in Canada or to Holy Cross House at Notre Dame, USA? Either way, perhaps our son will have the honor of meeting him some day at a CSC based function! -pgal

no such thing in coincidences