THE IMMENSITY OF YOUR MAJESTY 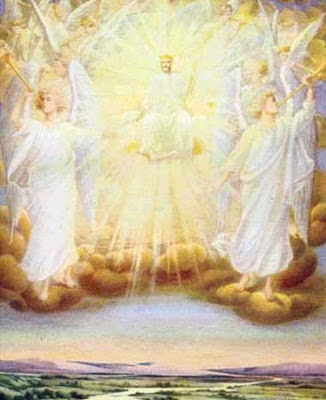 Many portions of the "corrected" English translation of the Mass have been translated from the original Latin into what some find a "howling" English equivalent. Actually it is the "literal dynamic" way of translating rather than an "equivalent dynamic" of translating into English.

These "howlers" have been scoffed at; made fun of and the translators whom some in the blogging world feel hijacked the translating process and used preposterous language that could have been and was actually better translated are rubbing the faces of these translators into words and phrases that they used such as in today's Christ the King preface: "...making all created things subject to His rule, he might present to the immensity of your majesty an eternal and universal kingdom..."

At the three Masses this weekend were I sang these words, I thought, that's not how I would have worded that, but it grew on me after the third Mass.

But more importantly, no one howled during Mass, fell out of their pew in disbelief or was slain in the Spirit. No one walked out of Mass and no one has done so for the past three months since we've been praying the corrected English translation. I don't even think anyone noticed that it was different than the Christ the King preface I sang last year on this Sunday!

I call those who are hysterical and upset with the corrected translation and keep on calling "fire" in the crowed theater of the Church a corrupt trouble making brood of characters. They will not go down in Liturgical history as the good guys, but as,sophomoric fire howlers!

But sing a Te Deum! For most of the parishes throughout the English speaking world, in particular the USA, the horrible, dynamic equivalent translation of Latin into English we've been using for 40 years, like wandering Jews in the desert, is ended. This Sunday is the last of the 40 year desert experience. Advent brings the dawn of new hope and expectations for our Liturgy as the desert is watered and flowers sprout because of this corrected translation; and I am convinced it will be a tremendous blessing even with some of the more awkward words and phrasing in the corrected translation.

Sing no dirges for the 1970 English missal, but only alleluia that it is now relinquished to the archives of "what were we thinking when we issued this?"
Posted by Fr. Allan J. McDonald at Sunday, November 20, 2011

There was an actor named John Houseman who had the sort of elocution to give proper meaning to these sorts of passages. It makes you think what it means. I think that people scoff at this sort of thing either out of ignorance or fear.

You're right rcg, Houseman would have done a fine job. James Earl Jones may even be a better choice.

Father, while no one fled from the new Translation I did see something last night at the 5PM Mass that did make me cry. Our resident Womyn Priest approached for Communion, and while I could not see if Father Kwiatkowski allowed her to receive, I did have a perfectly clear line of sight to the EMHC who dispensed Communion to her under the form of the Precious Blood. I ended Mass alternating between sadness and rage, and wanted to grab her and say something, or grab Father and say something, but I frankly didn't know how to do either without sounding like a mad man.

If we refused every delusional Catholic we'd be offering very few Catholics Holy Communion! This poor dear was arrested by the secret service trying to board President Obama's Air Force I a couple of years ago in California.

I expect there is a big difference when someone is mentally ill and simply arrogant. I seem to recall this being in the Catechism, I'll have to look it up.